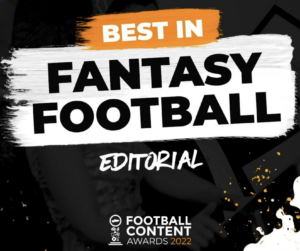 In the Meet the Manager series of videos and podcasts, Joe chats to Fantasy Premier League (FPL) managers with an interesting story to tell or a strong track record in the game.

Jordie van der Laan ticks both boxes, as a ‘notorious’ former professional footballer, most notably in the Dutch leagues, and an excellent FPL manager.

Jordie (@Jocckie_FPL) is arguably best known at Fantasy Football Scout as the footballer who called in sick from training with his team, Dutch side Telstar, so he could see his former youth academy side PSV Eindhoven take on Tottenham in the UEFA Champions League.

He attended the match, in pitch-side seats, with our very own TopMarx. However, by half-time his phone was full of messages and texts as television cameras had picked up a beaming Jordie throughout the match. He’d been rumbled.

Telstar sacked Jordie for his front-seat faux pas and his story hit the headlines globally following the match in May 2019.

Aside from his troubles at Telstar, striker Jordie has been able to use his on-the-pitch knowledge to help his Fantasy career, which started a decade ago when he was a teenager.

By assessing the on-the-field prowess of players, such as Brentford’s Ivan Toney (£7.2m) recently, he is able to assess which Premier League stars can earn his team points in the long term.

It’s certainly paying off, with a 55th-place finish in 2016/17 as well as two other top 10K finishes since then and multiple other top 100k conclusions to a season.

During his chat with Joe, he discusses his career, ‘that Spurs game’, as well as his top tips for a strong FPL finish.

Joe and Jordie also look ahead to Gameweek 9 and beyond. With both managers Wildcarding the previous week, they are well set up for the coming Gameweeks. But there are some tricky fixtures to navigate in the future, with a blank for Manchester City and Arsenal on the horizon. Jordie reveals how he plans to tackle the upcoming Gameweeks ahead of the World Cup.

Jordie is now the second former professional footballer who also has a stellar track record in FPL that I’ve interviewed for this series.

Last year I had the pleasure of meeting Ukrainian footballer Vanya (@winter_2-close), who ended the season as the top manager in his country with his third top 5k finish.

These rare beasts, who can see first hand what is going through the minds of players and managers, can often use this knowledge to support their FPL decisions.

What is a striker really thinking if he’s in the middle of a goal drought? How patient are managers with a player out of form? The likes of Jordie and Vanya can offer that unique perspective to their fellow FPL managers.