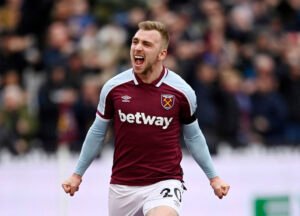 Gameweek 9 of Fantasy Premier League (FPL) is almost upon us, which gives us an opportunity to have a look at some more differential options.

This time, we’ve selected low-owned picks at West Ham United, Leicester City and Bournemouth, who we think have the potential to make an impact.

Jarrod Bowen (£8.1m) has endured a tough start to the season for West Ham United and is yet to score a Premier League goal.

However, he has netted two in Europe, and if he is to have any chance of being part of the England World Cup squad, will need his domestic form to pick up soon.

Fortunately, the Hammers’ fixtures are very good, with home games against Wolves, Fulham and Bournemouth coming up, plus an away trip to struggling Southampton.

As for Bowen, he has enjoyed more shots (15) than any of his teammates this term, but his accuracy has let him down, with just one of those efforts hitting the target.

It’s also worth noting that West Ham have massively underperformed their expected goals (xG), scoring just three from 7.57 xG, which has coincided with a tough run of fixtures against defensively sound opponents like Manchester City, Tottenham Hotspur, Chelsea and Brighton and Hove Albion.

Bowen has started poorly but will have a point to prove as West Ham’s league season resumes against Wolves, with his ownership down to just 3.8% in FPL. Some will see that as an opportunity, given that he racked up 12 goals and 17 assists in 2021/22.

Harvey Barnes (£6.9m) has struggled for form at Leicester City this season, blanking in four of his opening five league appearances.

However, he could do well given the Foxes’ forthcoming schedule, which includes back-to-back matches against newly-promoted Nottingham Forest and Bournemouth, followed by King Power clashes with Crystal Palace and Leeds United.

In fact, Leicester only play one traditional ‘big six’ side between now and Gameweek 16, at which point we break for the winter World Cup in Qatar.

As for Barnes, from Gameweek 3 onwards (the winger’s first start of the season), he has since produced 10 shots in the box, more than any other FPL midfielder bar Gabriel Martinelli (£6.6m). It’s also worth noting that he has been a reliable source of Fantasy returns in past seasons, with a combined 21 goals and 27 assists in his last three campaigns.

Leicester, meanwhile, are without a point since Gameweek 1 and bottom of the table. However, they have still scored a respectable 10 goals in their seven matches, despite a tough run which has included games against Arsenal, Spurs, Chelsea, Manchester United and Brighton. They have also racked up in excess of 1.45 xG in three of their last four outings.

Barnes, a product of City’s academy, is a real punt given his lack of returns this season, but the fixtures should give him the opportunity to add to his tally soon.

Ryan Christie (£5.3m) has been an ever-present under interim boss Gary O’Neil at Bournemouth, which has coincided with a three-match unbeaten streak.

In that time, the Cherries have recorded five points, ensuring they sit four points clear of the relegation zone ahead of Gameweek 9.

They may have had the fewest shots in the division so far, but under O’Neil, they are improving, with 23 goal attempts across his three outings, compared to 26 in five matches under Scott Parker. That’s because they have adopted a more attacking approach, whether playing a 4-2-3-1 or 3-4-2-1 formation.

In both set-ups, Christie’s performances have caught the eye, with his six shots and 14 take-ons from Gameweek 5 onwards both team-leading totals.

“I think he’s done well. I think he was a big part of the comeback at Nottingham Forest. I think he took up some lovely positions, always works his socks off. He has a lovely quality on his left foot. So, yeah, loads of qualities that we’re definitely going to need this season.” – Gary O’Neil on Ryan Christie

More recently, Christie has played a role in both of Scotland’s Nations League fixtures, scoring and assisting for his country against the Republic of Ireland.

Now, Bournemouth return to action on Saturday, when they host Brentford before playing a second home fixture in succession a week later against bottom-placed Leicester City. Thomas Frank’s side, whilst ninth in the table, have failed to win on the road this season and are without an away clean sheet in 19 matches.

Christie has played a key role in Bournemouth’s recent revival, and while most of the Fantasy chatter during the international break has been about Dominic Solanke (£5.7m), he is perhaps going under the radar as a budget differential.