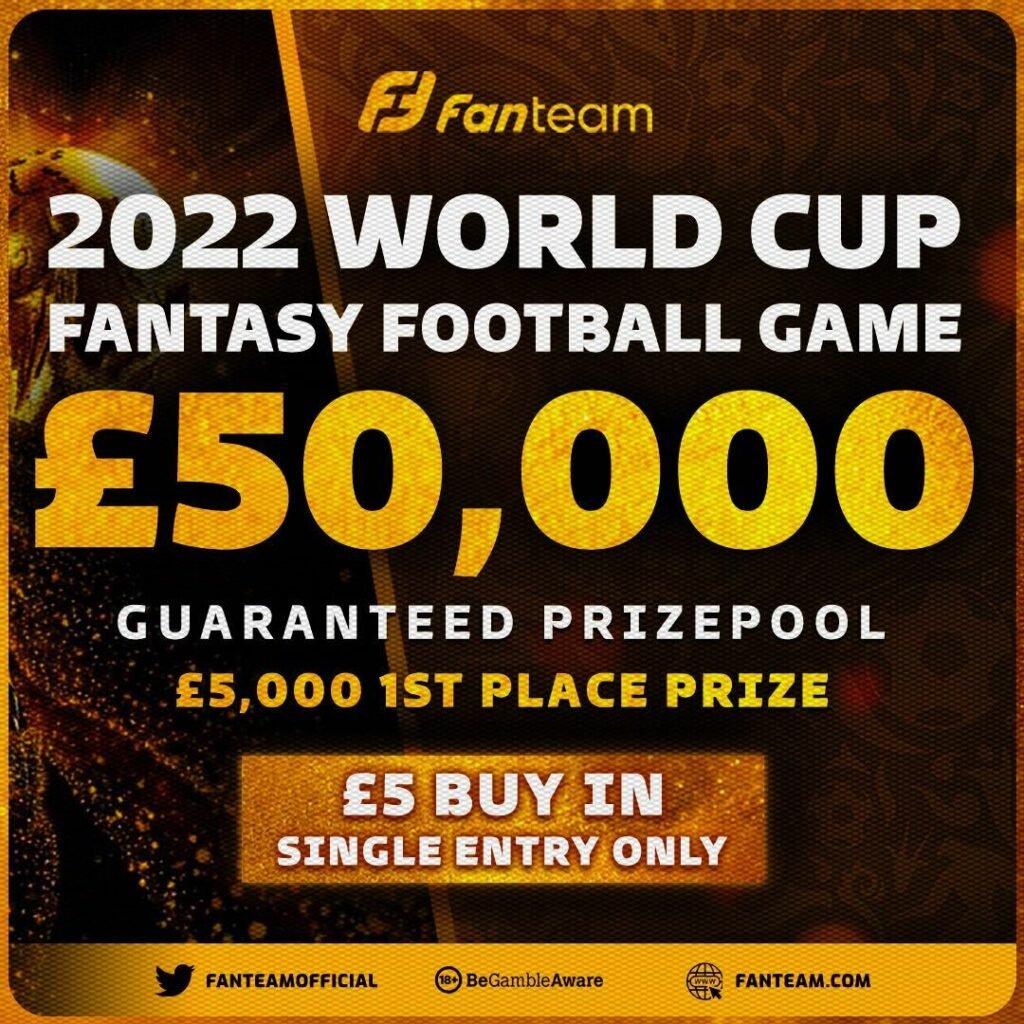 There are just days to go until the 2022 FIFA World Cup starts – so it’s time to start nailing down those picks for FanTeam’s World Cup Fantasy game.

Here we take a closer look at strategy, but not before bringing you a quick reminder about the game itself and the mouth-watering prize pool on offer.

FanTeam have listened to previous concerns about having to compete with rival managers that submit multiple teams.

Therefore, the main game of £5 entry will restrict each manager to one team only.

It also began life with a minimum prize pool of £50,000 but that is getting bigger and bigger after the minimum entries were met.

For those who like the old-school FanTeam with multiple teams allowed, the £20 buy-in tournament allows up to 25 entries per user, boasts a minimum guaranteed prize pool of £100,000 and at least £10,000 for first place.

As both options have a progressive prize pool, the £100,000 and £50,000 will continue to rise with each new entry beyond the minimum guarantee.

One of the main differences between FanTeam’s game and other Fantasy games is the ‘Safety Net’ feature, which makes up for the lack of substitutes. If a player doesn’t start a match, he will automatically be replaced by the closest-priced starter from the same team in the same position.

For example, if you own Phil Foden (£10.0m) but he was benched by Gareth Southgate then Bukayo Saka (£9.5m) – if selected – would come into play.

Or if you’re worried about Memphis Depay‘s (£11.5m) fitness for the opening game but want him for later rounds, stick him in your side and, even if he’s not fit to face Senegal, the next-priced starting Dutch forward will get points for your team.

This gives managers the freedom to pick ‘rotation risk’ options or fitness doubts that would likely be avoided in the official FIFA game – ideal for when you know you want coverage of a top team’s enticing fixture but aren’t sure you can predict the starting XI.

Just like in FPL, FanTeam allows you to roll your free transfers.

In fact, FanTeam will allow you to save up to eight free transfers if you have not used them in previous rounds!

There’s a balance to be stuck when it comes to usage.

With this being a short-term tournament format rather than the long slog of a 38-game domestic campaign, being more aggressive isn’t a bad policy.

For example, you may want Christian Eriksen (£9.0m) for his first group game against Tunisia, but he then faces France in Matchday 2. Moving him on to, say, Luka Modric (£9.5m) for Croatia’s second group fixture against Canada may appeal.

But it’s very important, maybe more so, to consider the longer outlook.

Several countries may have already qualified by Matchday 3, so while the Safety Net feature will cover you for any tactical rests, you may not want a glorified second-string player in your side.

Saving a transfer or two for that third round of group games may be important, then.

But potentially even more crucial, if any upsets are on the cards, is having one eye on the round of 16 (more of which below)…

ANTICIPATE WHO WILL QUALIFY FOR THE LAST 16

The Wildcard in FanTeam isn’t available until the quarter-finals, so you’ll need to have a think about which nations are likely to qualify for the round of 16.

For example, you don’t want to lump on players from, say, Ecuador in your FanTeam team, given that their chances of qualifying from Group A may be on a knife edge.

We’ve put together a list of qualification odds for all eight groups here, so you can see which countries the bookmakers think are most likely to make it through to the knockout rounds.

You do get two free transfers ahead of the round of 16, at least, but having an extra one up your sleeve – ie by rolling a transfer – might not be a bad idea if qualification is looking tight for some of your side.

Players get rewarded for the usual stuff like goals, assists and clean sheets in FanTeam but bonus points are also awarded, as you can see in the graphic above.

All players get an extra +0.3 points if their team wins while they’re on the pitch, although you’ll probably be backing assets from the likes of France, Brazil, England, the Netherlands and Argentina anyway so victories are to be expected.

The ‘shots on target’ bonus is something worth paying attention to, however. All players get extra points if they hit the target with an effort, with defenders (and goalkeepers!) rewarded more than midfielders and forwards.

Goalkeepers also got half a point for every save they make, rather than one point for every three stops, so finding a busy custodian who has a decent chance of keeping out the opposition is the holy grail between the sticks.