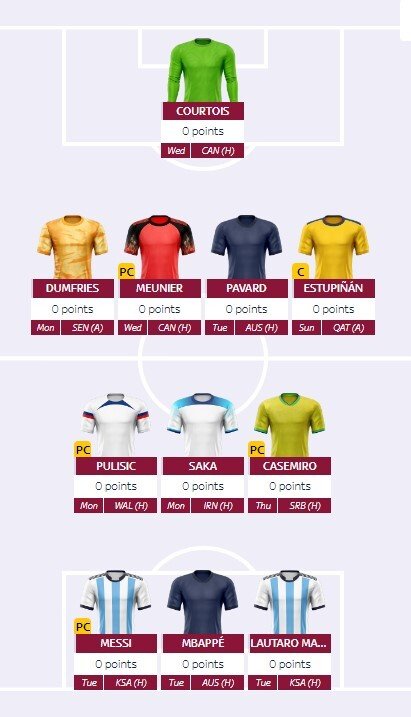 Long-time Scout contributor Joe reveals the players and transfers he is looking at for the first round of the Sky Sports World Cup Fantasy game, where there is a first prize of £10,000 on offer.

If you want to know more about how to play the free-to-enter game, check out our beginner’s guide.

Our captaincy calendar has more tips on who to select for your daily armband choice, meanwhile.

But there are some new tweaks for the World Cup version, such as having just three transfers for each early round. The full rules can be viewed in our guide here.

With this in mind here are my initial picks for Matchday 1.

I’m banking on a clean sheet for the Red Devils on Wednesday, which propels 96-cap keeper Thibaut Courtois (£7.8m) into my side.

Brighton’s Ecuadorian left-back Pervis Estupinan (£6.5m) will be my first captain as I look to target a victory for The Tricolors against minnow hosts Qatar on Sunday 20 November.

With 28 caps and 17 starts during World Cup qualification, he looks like a shoo-in for a starting role for his country in the same position. His three goals for Gustavo Alfaro’s troops, some set-piece duties and the strong chance of a clean sheet, makes him a very solid armband pick.

Another attack-minded full-back to take a place in my initial draft is Holland’s right-back Denzel Dumfries (£8.9m), who has found the net five times since he earned the first of 37 caps four years ago. I like the look of him for the duration of the early rounds, with Senegal, Ecuador and Qatar as his opponents.

I’m bullish in Belgium keeping Canada at bay with my selection of a second of their defensive assets, Thomas Meunier (£8.8m). Should The Maple Leafs breach their back line I’m hoping the Borussia Dortmund right-back can earn me attacking returns at least.

I anticipate Australia will struggle to score against France. This earns their right-0back, Benjamin Parvard (£8.7m) the nod in my side. With Denmark and Tunisia up next he has the prospect of returns at both ends of the pitch throughout the early rounds and could be another ‘glue player’ for me that I do not need to remove.

Five of the USA captain Christian Pulisic’s (£7.9m) 21 international goals arrived during World Cup qualification to put him in my side. His kind price tag is also appealing as is his dominance of set pieces. The Pennsylvanian talisman could do well off the wing during these early rounds, particularly against Wales, when he has the chance of being my captain on Monday 21 November

Paying attention to bonus tiers is crucial in Sky, with extra points to be earned from tackling. This makes strong defensive midfielders gold dust and Brazil’s midfield maestro Casemiro (£7.8m) is no exception. The Manchester United man earned tackle bonus in five of his seven matches as a starting regular and looks set to do the same in the World Cup version of Sky Fantasy Football.

Argentina are one of the favourites to win the tournament after a strong qualification campaign, where they were runners-up to Brazil. Their attack looks like the team to target, scoring three or more goals in five out of their eight matches.

Their legendary attacker Lionel Messi (£11m) is a lock for me, on set pieces and finding the net eight times for his country this year from the wing. He looks like a great captain on Tuesday 22 November when Saudi Arabia are his next victims.

Will France succumb to the Champions curse and falter early on next time around? I’m hoping not as I’m backing their forward Kylian Mbappe (£10.8m) to prosper early on against Australia and add to his four goals for Les Bleus so far this year.

Monday’s captain Estupinan to England right back Kieran Trippier (£7.8m) looks certain for my first transfer. England being the first match on Tuesday means I can switch to another of Gareth Southgate’s back line should the Newcastle man be benched.

Next up, Mbappe will make way after this Tuesday match for a strong captain, with Kevin De Bruyne (£10.5m) looking a great armband shout for Wednesday 23rd November against Canada with 71 attacking returns in his 93 international appearances.

ENTER YOUR OWN SKY FANTASY TEAM AHEAD OF SUNDAY