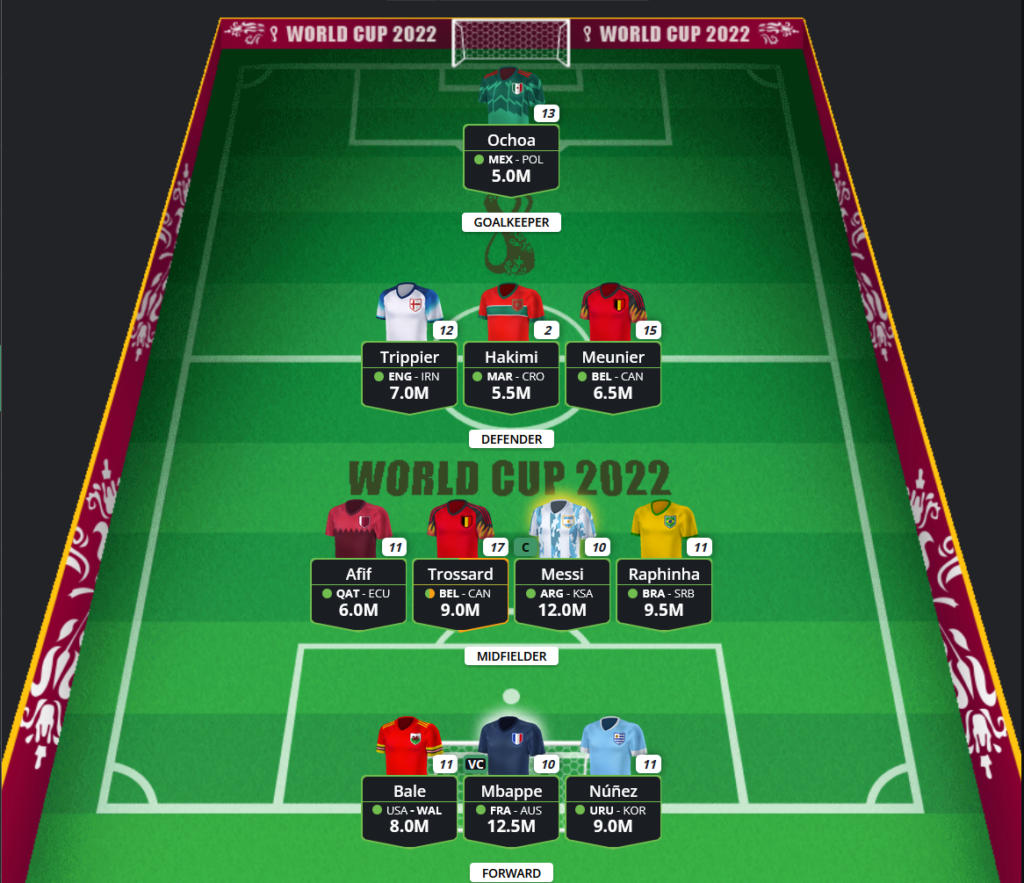 There are just days to go until the 2022 FIFA World Cup starts, so it’s time to start nailing down those picks for FanTeam’s World Cup Fantasy game.

There are two different types of game depending on your level of interest, with the single-entry version set up for those of you who don’t want to compete against managers who submit dozens of cover-all-bases teams.

We’ve covered the rules and scoring system in a separate article, so now we hear from one of our own – Az – and how he plans to set his team up in Matchday 1.

I’ve been playing FanTeam for the last few years now, and I have to say, I’m incredibly impressed with the slickness of their offering for the World Cup game this season.

I’ve dabbled in both single-team and multi-team tournaments over the last year but prefer to have one team to focus all my attention on. The player classifications (e.g. Messi, Neymar as midfielders) and Safety-Net feature make this an incredibly accessible game and I’m also looking forward to playing some of the “daily” matches, too.

For my team, I’ve been able to select a variety of talismans for their sides, as well as some slightly more left-field punts thanks to the safety net.

In goal, I’ve selected cult hero Guillermo Ochoa (£5.0m). Incredibly, this is Ochoa’s fourth World Cup tournament and the 136-capped Mexican comes in at an attractive price for a team that will harbour hopes of qualifying for the last 16 after having done so in all of the veteran goalkeeper’s last tournament appearances. The first game against Poland will be crucial for Mexico’s chances of progression, as Argentina are firm favourites for the group, but Ochoa should rack up the save points across his group matches whatever the results.

In defence, Kieran Trippier (£7.0m) is an expensive acquisition but club form, set-piece threat, England’s defensive set-up and what looks like a relatively straightforward group (gulp!) make his selection an easy one. Similarly, Thomas Meunier (£6.5m) is the most attacking option for a Belgium side with attractive games against Canada and Morocco – and a final group game against Croatia, who lack a recognised international striker with Mario Mandzukic unavailable. The Safety Net feature means that even if he isn’t fit to start, I’ll still get a Belgium defender playing in his stead.

For my final defensive spot, I like the look of Achraf Hakimi (£5.5m), who scored two free-kicks at the latest AFCON and who plays in an attacking-looking side alongside the likes of Sofiane Boufal and Hakim Ziyech.

Alphonso Davies (£5.5m) is another option at the same price, often playing as a number 10, but he comes into the tournament with a bit of an injury doubt and the Safety Net isn’t as useful here as his understudies are far less attractive options in your side.

Lionel Messi (£12.0m) was the first name on my teamsheet. I’m expecting Argentina to go all the way in this tournament and if that’s going to happen, it is highly likely that Messi will light up the tournament in what is surely his last-ever World Cup. With a midfield classification, and a first game against Saudi Arabia, I think it will take a brave FanTeam player to ignore the GOAT.

In Raphinha (£9.5m) and Leandro Trossard (£9.0m), I’ve gone for cut-price alternatives to the big guns of Neymar (£13.0m) and De Bruyne (£10.5m). This is where the Safety Net feature really comes into its own, as both players are probably too risky to select in other Fantasy World Cup formats – but in FanTeam, the pair have good options below them if they don’t start. If Trossard doesn’t start, for example, I’ll have one of Yannick Carrasco (£8.5m), Youri Tielemans (£8.0m) or Thorgan Hazard (£7.5m) subbed in. If Raphinha misses out, Lucas Paqueta (£9.0m), Antony (£8.5m), Gabriel Martinelli (£8.0m) or Rodrygo (£7.5m) come in. Plenty of options to cover me if the teamsheets are different to what I expect.

My final midfield spot goes to Akram Afif (£6.0m). I wanted to select a “home” player for this tournament, as the backing of the Qataris will be a huge motivating factor for the side who will have some hope of getting out of the group but will know that the first match against Ecuador will be one they will likely need to win. Afif is widely regarded as the most talented player in the side and has set pieces in his locker. Almoez Ali (£6.0m) is another option but is classified as a forward.

There are some really good options for our forward lines in FanTeam, and I had a hard job selecting these. Kylian Mbappe (£12.5m) is of course very expensive but his 118 goals in 128 appearances for PSG, and a goal every other game for France, speaks volumes. At 23 years old, this is a real chance for Mbappe to stake a claim as the “best player in the world”. Tournament success for France, paired with a Golden Ball/Boy award for Mbappe will see him reach a new level of elite status. He’ll have to achieve this without Messrs Kante and Pogba in midfield but while this may harm France’s chances later in the tournament, I’m fully expecting them to win their group and for Mbappe to be in the mix for top goalscorer.

Darwin Nunez (£9.0m) is a bit of a fun one, and after watching him for Liverpool so far this season, I can only describe him as “chaos”. I really like the look of Uruguay’s group, however, and I’m expecting lots of goals against South Korea and Ghana especially, while Portugal come into the tournament under a bit of a cloud of distraction due to Cristiano Ronaldo’s recent interview. I’m actually tipping Uruguay to score the most goals in the group stages, and that surely means big points for Nunez, with only the aging Luis Suarez and Edinson Cavani as competition for the striker role(s).

Lastly, with just £8.0m left in the bank, I had to take a punt on Gareth Bale. It might be a bit of a nostalgic pick, as I’m not expecting much from Wales this tournament, but any hopes they have rest on his shoulders. He has declared himself fully fit, and will know that a win against the USA will put them in good stead in the group. The extra motivation against England in the final MD is also a big factor too.