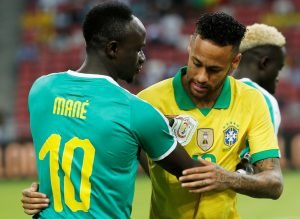 Our World Cup Fantasy team previews continue with a look at Brazil, who after a limp quarter-final exit in 2018, are the favourites to win in Qatar.

As the only nation to have qualified for every World Cup, it was no surprise to see Brazil easily top the big South American group with the most goals, fewest conceded and an unbeaten record. The first nine matches all ended in victory, whilst the final three were all 4-0.

So comfortable was both theirs and Argentina’s journey, they decided not to bother replaying the bizarrely suspended match where health officials stormed onto the pitch to accuse Argentine players of breaking Covid quarantine rules. Therefore, 17 qualifiers were played rather than 18.

It hasn’t all been perfect – losing last year’s Copa America Final on home soil, for example – but their collection of world-class goalkeepers, centre-backs and attacking midfielders breeds confidence that they’ll go all the way this time, having not bettered the quarter-finals over their last four attempts.

However, a word of caution. Since losing to Belgium in the 2018 tournament, Brazil have only faced one European side – the Czech Republic in March 2019. There will be two in Group G.

Three penalty goals by Neymar ($10.5m) eased the Brazilians to victories over South Korea and Japan in June, with Richarlison ($7.5m), Phillipe Coutinho and Gabriel Jesus ($9.0m) also on the scoresheet in Seoul.

The Selecao then brushed aside Ghana in a friendly in September, with Richarlison combining twice with Neymar, before another dominant performance saw them destroy 10-man Tunisia 5-1 a few days later.

As a result, there are plenty of reasons to be excited by their team heading into Qatar, where they will bid for a record-extending sixth world title.

‘The World Cup is quite hard to predict but I think Brazil are favourites to win it, so I would say winner, if not second place or semi-finalists. Of course quarters are always a possibility as well, but that is the minimum level I believe they will reach.” – Bernardo Gollo

“I expect Brazil to win the FIFA 2022 World Cup in Qatar as they have one of the best squads in the tournament and an experienced coach who knows his players.” – Manzi Nathan

‘The attack is very strong, with plenty of depth in case of injuries and suspensions. The midfield, central defenders and goalkeepers are also top in the world. We have an experienced team and management with vast World Cup experience to take it all the way.” – Bernardo Gollo

“Brazil is surely blessed in attack and I think it’s safe to say that they will benefit from it for at least another decade with fresh and young blood in their surroundings with the likes of Vinicius, Raphinha, Rodrygo, Antony and recent Premier League sensation Gabriel Martinelli.” – Manzi Nathan

“I believe the full-backs are our weakness with Danilo, Alex Sandro, Alex Telles and Dani Alves. Although all of them are very capable players playing for top clubs in top leagues, bar Dani Alves, they are not the best full-backs Brazil have had. But Tite’s team set up now does not use the full-backs as wingers going forward as much as we used to, they are more defensive a bit like Cancelo at Manchester City this year for comparison, helping protect the defenders. That also allows them to have one defensive midfielder in Casemiro and a more attacking one next to him like Bruno Guimaraes or Lucas Paqueta.” – Bernardo Gollo

“There are few weaknesses to find in this superstar team but I do have to say their defense and specifically their full-back positions are low in quality and quantity compared to other positions on the pitch. They sure do have experience in the centre-back roles with Marquinhos of PSG and Thiago Silva of Chelsea both expected to make the Brazil starting line-up. However, they are surrounded on the full-back positions by Alex Telles and Alex Sandro on the left and Danilo and 39-year-old Dani Alves on the right, which shows the lack of quality in those full-back roles.” – Manzi Nathan

There’s only one place to start and that is with Neymar, who performs more of a midfield playmaking role for Brazil and is likely to begin the tournament as a roaming number 10. That means he’ll be heavily involved in the middle of the pitch, where he will look to play quick one-twos and through balls for his teammates.

However, he carries plenty of goal threat too: he’s scored 15 in 20 games for PSG this season and with 75 goals in 121 caps for Brazil, he’s only two shy of Pele’s record. It’s also worth noting that in qualifying, his 41 goal attempts, 21 shots in the box and 12 big chances were all team-leading totals.

Neymar will probably take penalties and most of their free-kicks in Qatar and looks like an excellent option in a group with Cameroon, Serbia and Switzerland.

“Neymar has penalties and is our free-kick taker. He had more open-play goals and assists combined than any other player in qualifying, with eight of each.” – Bernardo Gollo

“Of course you need Neymar Jr, the main man. The biggest and last piece to this Galacticos-like ‘super team’. There is no debate here since he will get you goals, assists and will start 90% of games. He is probably the first name to tick off your World Cup Fantasy list.” – Manzi Nathan

Should fitness not be an issue with Richarlison then he is likely to start at centre-forward, having scored plenty of goals at international level this year.

“Richarlison, if fit, should play as our number nine and with that amount of talent feeding him the ball he scores a lot of goals for Brazil, with six in the World Cup qualifiers, which are harder games than European qualifiers as there are no easy nations. He was only one goal behind Messi with seven and two behind Neymar with eight. But being fit for the first match is an issue.” – Bernardo Gollo

However, with an ownership of just 9.8% at the time of writing, our correspondent Bernardo thinks Vinicius Junior ($10.5m) could be a decent, if riskier (even a start against Serbia isn’t assured), under-the-radar pick, perhaps for Matchdays 2 or 3 once we’ve established his game-time prospects.

He is Real Madrid’s leading scorer this season but has only scored once so far for the Selecao in 16 appearances. Despite that, Brazil haven’t yet lost a game he’s started. He arrives bang in form for Madrid (10 goals, five assists this season) and he’ll be keen to make a statement at his first World Cup.

“The third asset could be Vinicius Jr if one is looking for an attacking player we could even call a differential for the World Cup. He is just so explosive, skilled and can score many goals and assists.” – Bernardo Gollo

Defensively, it wouldn’t surprise anyone if Brazil ended up with a couple of clean sheets in the group stage, with Alisson ($6.0m) and Marquinhos ($5.5m) the leading candidates at the back.

Alisson is a strong contender for the Golden Glove award and Marquinhos started the highest number of games (14) for Brazil during qualifying.

“Alisson has established himself as one of the best goalkeepers in the past five years and is expected to play in goal In Qatar. Also when you look at the teams in Brazil’s group such as Cameroon and Serbia, they don’t seem to be able to score against this Brazilian team.

“Another player you need in your team has to be Marquinhos simply because he looks set to play game after game and just like Alisson he should pick up some clean sheet points. Another reason to put him in is because of his aerial dominance. On set-pieces like corners or indirect free-kicks, he is a constant danger in the box so he might get a goal or assist here and there.” – Manzi Nathan

“If one is looking for clean sheet points and goal threat I would say Marquinhos. He’s an amazing defender who can score goals on free-kicks and corners having five so far for the national team.” – Bernardo Gollo

Here’s how our correspondents reckon Brazil could line up in their opening game:

“This is quite an attacking line-up, so Tite might drop Vinicius Jr or Richarlison against Serbia, play Neymar up top and add Fred to the midfield (although I personally don’t agree and would play Bruno Guimaraes). Eder Militao can come in for Thiago Silva and Bruno Guimaraes for Paqueta or Fred later in the tournament. And Antony is high on Raphinha’s heels for a place on the right wing in my opinion, but it’s Raphinha’s place to lose.” – Bernardo Gollo

“The reason behind this line-up is that Brazil need to find a balance in this game between attack and defence. As we know, Serbia has some great attacking quality like Mitrovic who is physical and can’t be given space so best to start your best center-backs. It will also be physical in defence for Serbia so you need a target man in that Brazil forward line and Richarlison has been injured so I’d rather start Gabriel Jesus who’s had an amazing start to life at his new club Arsenal.”- Manzi Nathan