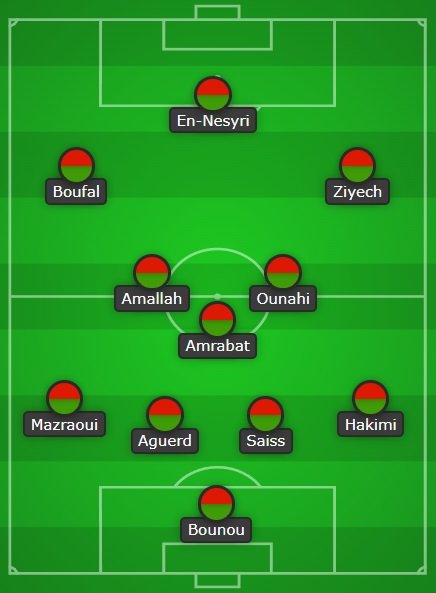 Our World Cup Fantasy team previews continue with a look at Group F’s Morocco and their recent changing of head coach.

It’s hard to tell how good Morocco actually are.

By putting 40 teams into ten groups of four, the African confederation severely stretches out the quality and makes a two-legged playoff the only real competitive action for those in first place.

Furthermore, although they were the continent’s only team with a 100% group stage record, all six matches had to be played in Morocco due to their three opponents’ infrastructural problems.

A 5-2 aggregate win over DR Congo booked Morocco’s place in Qatar, as they hope to improve a dire record of just two wins from 16 World Cup matches.

January’s African Cup of Nations journey ended at the quarter-final stage, with Walid Regragui replacing Vahid Halilhodzic as coach in late August due to the latter’s reported feud with Hakim Ziyech ($7.0m).

Thursday night brings their final friendly, against Georgia in Sharjah.

“Realistically, it will probably be a group-stage exit due to Belgium and Croatia having more quality and experience than Morocco. Couple that with our new head coach having had just three official friendly matches with the team and it will be a tough task. The round of 16 would be a huge achievement and isn’t impossible.” – Joseph Findlay-Bada

“I’d say defensively we are pretty strong. Yassine Bounou ($4.5m) is a very good goalkeeper. We have two of the best full-backs in Achraf Hakimi ($5.0m) and Noussair Mazraoui ($5.0m), with solidity at centre-back.

“Sofyan Amrabat ($5.5m) is vital when sitting in front of the back four and we have a lot of players who are good in dribbling situations, such as Hakim Ziyech, Sofiane Boufal ($6.0m) and Azzedine Ounahi ($5.0m).” – Joseph Findlay-Bada

“The lack of a number nine. We have tried multiple players in this forward position but none have really taken their opportunity. Youssef En Nesyri ($5.5m) will probably start but he’s very inconsistent and isn’t good enough technically at World Cup level.” – Joseph Findlay-Bada

“Achraf Hakimi – A very attacking right-back who will be on some free-kicks, scoring two at the latest AFCON.

“Hakim Ziyech – Will be on most set pieces, being our main creative hub.

“Sofiane Boufal – The main penalty-taker, he has improved his end product since leaving Southampton.” – Joseph Findlay-Bada

Morocco’s top scorer and assister in qualifying – Ayoub El Kaabi – was left out of Regragui’s final squad, so it’s up to Youssef En-Nesyri to lead the line. The Sevilla man has eight Champions League goals to his name, including two recent ones in October.

His club team-mate Yassine Bounou also appeals, as not many $4.5m goalkeepers currently stand out. Although Chelsea’s Hakim Ziyech is still the star man, his 148 minutes of league football this season can either be interpreted as freshness or a lack of match fitness; perhaps the superb goal he scored from his own half in Thursday’s friendly win over Georgia answers that.

But arguably the real star is Achraf Hakimi, who has already played regular football for Real Madrid, Borussia Dortmund, Inter Milan and Paris Saint-Germain by the age of 24. If you’re one of the many Fantasy Premier League (FPL) managers to have enjoyed owning Kieran Trippier’s free-kicks, then you’ll love Hakimi.

Take the two-legged play-off against DR Congo: across those 180 minutes, Hakimi racked up five shots, four chances created and one big chance.

For Matchday 3 Wildcarders, he’s a differential name to consider when Morocco go up against group underdogs Canada.