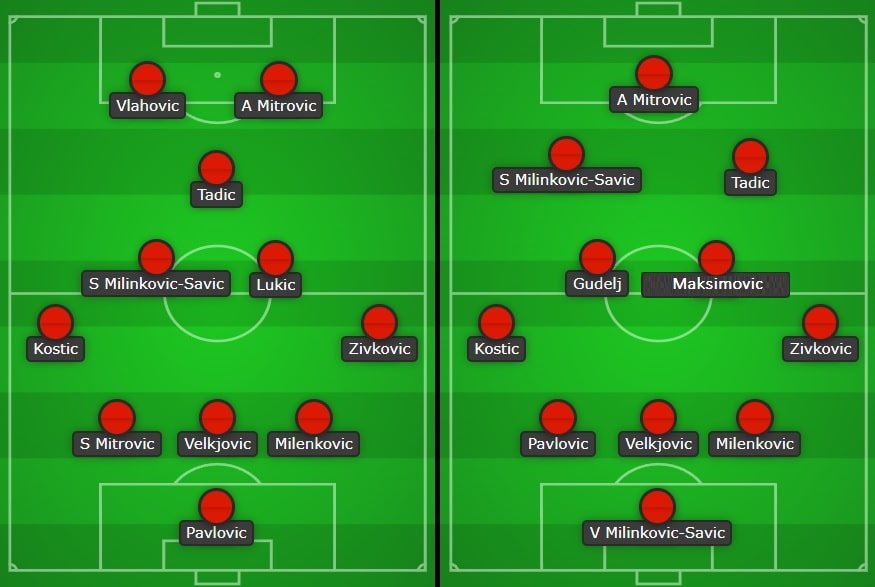 Our World Cup Fantasy team previews continue with a look at Serbia, who are in Group G alongside Brazil Switzerland and Cameroon.

A dramatic header from Aleksandar Mitrovic ($7.0m) sparked delirious celebrations in Lisbon, as Serbia snatched top spot from Portuguese hands in the last minute of the final match.

As their group only contained five teams, it was partnered with Qatar so that each matchday’s spare team could face the World Cup hosts in a friendly. Serbia won both meetings 4-0.

Unbeaten throughout the eight games, what could cause concern is their poor defence. Only one clean sheet was kept, with third-placed Ireland managing to concede fewer goals.

The squad is full of talented individuals but Serbia were the only European qualifier to not participate in the top rank of Nations League groups. Having said that, good Group B4 summer wins over Sweden and Norway ensured promotion to such a level for next time.

“With some luck on our side, I hope we can reach the semi-finals. We have a bunch of players at some top European clubs like Sergej Milinkovic-Savic ($7.0m) at Lazio, Dusan Tadic ($8.0m) at Ajax and both Dusan Vlahovic ($8.5m) and Filip Kostic ($6.0m) are at Juventus.

“Nikola Milenkovic ($4.0m) and Luka Jovic ($7.0m) play for Fiorentina, with Mitrovic at Fulham too. All these guys are starters for these clubs.” – Sasa Djordjevic

“Our group is probably the toughest one in this World Cup, so it will be very difficult to get to the last 16. It will be 50-50 between Serbia and Switzerland for the second spot, though Cameroon are a solid team as well. But we haven’t had a more potent attacking team for decades, with a manager who also likes attacking football, so expectations are big in our country.

“If we get through the group, I can see us even getting to the quarter-finals as we would play without pressure then – and pressure is one of our main problems.” – Dusan Mrdjinac

“Our main strength is offensive football played in a 3-5-2 formation, with two true forwards, a creative number ten and two attacking ‘wing-backs’ who are basically wingers. Andrija Zivkovic ($5.0m) is something like Aaron Lennon from his best days, whilst Kostic is something like Theo Walcott at Arsenal.

“Lots of our players began their careers with Partizan Belgrade – one of the best football schools in Europe along with Ajax and Barcelona.” – Sasa Djordjevic

“Surely it’s our attackers. Few teams can count on the quality that Tadic, Mitrovic, Vlahovic, Jovic, Sergej Milinkovic-Savic and the super-fast Radonjic have. Our team is the tallest in this World Cup, so we possess a strong aerial threat, but are also technically gifted. Serbian coach, Dragan Stojkovic Piksi, is perhaps our greatest footballer ever and he gave long-needed confidence and stability to our team.” – Dusan Mrdjinac

“Probably our defence, as we play with an attacking mentality.” – Sasa Djordjevic

“The weaknesses are our defence and inconsistent goalkeepers. Our main centre-backs are still young and they don’t play in Europe’s best teams. The only experienced centre-back is Stefan Mitrovic, but he never was a top-class player and is slow. All of that resulted in keeping only three clean sheets in 13 competitive games under Stojkovic’s lead, conceding even in games against Europe’s weakest national teams.

“We haven’t had a nailed number one in the past few years, with Rajkovic and Dmitrovic getting similar game-time and both making mistakes often. But Vanja Milinkovic-Savic (priced at only $4.0m in the FIFA Fantasy game), the lazier of the two Milinkovic-Savic brothers, started the last three matches after finally getting the number one spot for his club Torino as well. His advantage over Rajkovic ($4.0m) and Dmitrovic ($4.5m) is that he is much taller than them and great in ball playing, which is very important for our coach, so I am sure that he will be our starting keeper even though he is the youngest in that position. Other than that, there are no clear weaknesses except a lack of running sometimes.” – Dusan Mrdjinac

“Aleksandar Mitrovic – Our best forward in the team and top scorer during qualification.

“Dusan Tadic – King of assists. In my opinion, only Kevin De Bruyne is better than Tadic at this. He is almost certainly on corners and free kicks.

“Dusan Vlahovic – The partnership with Mitrovic is an excellent one, reminiscent of Dwight Yorke and Andy Cole!” – Sasa Djordjevic

“In order, the top three are Aleksandar Mitrovic, Dusan Tadic and Sergej Milinkovic-Savic. We are a very attacking team and this trio is most likely to be involved in goals.

“Mitrovic shoots the most and is always there for a header, similar to his performances at Fulham. But he struggled with an injury recently and is in a race against time to be fit for the first match against Brazil. He won’t play in a friendly against Bahrain just not to risk him, but he is training with a special program. Stojkovic told Serbian media that he would play even with one leg so that shows how important he is to us.

“Tadic has set pieces and is a creator, generally assisting rather than shooting. I would compare him to the role that Kevin De Bruyne has for Man City.

“Sergej offers a big threat both from set pieces and when shooting from distance. He plays as free-roaming centre midfielder most often, but is sometimes deployed as attacking midfielder or a playmaker. He often gets into the box as well and has strong assist potential.

“Vlahovic is also a fantastic player and a threat but not for the first game against Brazil as I expect him to be benched for an extra midfielder and a more balanced line-up. Plus, he has been carrying an injury and might not be fully fit for the first match, but the coach said he started training on Wednesday. Later on, he could be a great option too.” – Dusan Mrdjinac

Our two correspondents agree on seven of the starters against Brazil, in a wing-back formation.

There is a slight disagreement over which $4.0m goalkeeper gets the nod, whilst Dusan believes an extra midfielder will be used to help cope with the dazzling South Americans.

There is the caveat over Mitrovic’s fitness, too, with Vlahovic and Jovic possible deputies.