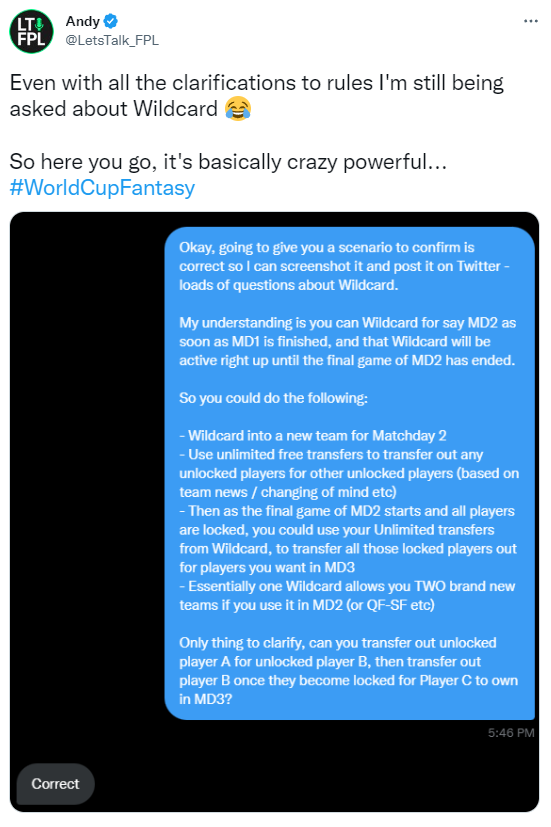 The game-makers of FIFA World Cup Fantasy have revised, or attempted to clarify, some of the rules over the past 24 hours.

It’s been a bit of a shambolic week, in all honesty, with dozens upon dozens of players – many of them prominent – not priced up until around three days before the tournament gets underway.

Confusion has reigned around the ‘how to play’ section, too, with the rules on captaincy, transfers and chips all a bit ambiguous.

We’ve got Let’s Talk FPL’s Andy to thank for much of the below, as it was his correspondence with (we think!) one of the brains behind the game that led to the attempted clarification – not that the waters aren’t still muddy in some areas.

Here we’ll attempt to bring you the latest of what we know.

First, a bit of jargon-busting.

Matchday doesn’t mean a calendar day but rather a round in which all active teams play once. So, for example, Matchday 1 features all 32 teams playing their first group-stage games.

Now we come on to locked/unlocked players.

The players who you have selected for your team will either display as ‘locked’ or ‘unlocked’ once a Matchday has begun:

So, to give an example, every player bar those representing Qatar and Ecuador will appear unlocked when Sunday’s curtain-raiser is underway.

There’s been a tweak to the transfer rules, too:

This isn’t like Sky, where you can tactically use your allocated transfers to get points from more than 11 players on a Matchday.

In the FIFA game, you’ll only get points from 11 players, although substitutions and transfers at least allow you to alter who those 11 players are.

As we’re talking about transfers here, let’s elucidate on that.

Everyone gets unlimited transfers before the tournament starts on Sunday, as we knew already.

But once Matchday 1 commences, you have a further two free transfers to call on.

This transfer will be processed instantly, and your new player will begin scoring points in the current Matchday. You will not receive any points this Matchday for the player you transferred out.

This is very handy if you see a teamsheet and the player you are backing is on the bench or not involved at all.

For example, say you owned Phil Foden ($8.5m) but he’s named only as a substitute for England’s clash with Iran. So long as you make the move before kick-off, you can transfer him out with one of your two allotted moves and bring in a team-mate who does start, say Raheem Sterling ($8.5m) or Bukayo Saka ($8.0m), or a player from a different (and yet-to-play) nation altogether.

If you do this, the transfer will only become active for the next Matchday. The locked player you sold will also keep the points they earned this Matchday.

As an example, say it’s Monday evening of Matchday 1 and Foden has already played and got you two points.

Any move for an unlocked player, say Angel Di Maria ($8.5m) as a Foden replacement, would come out of your Matchday 1 allocation but Di Maria wouldn’t start scoring points for your team until Matchday 2.

Transfers cannot be reset once they have been confirmed but you are able to roll over one unused free transfer per Matchday.

Confused? You should be, and it’s going to get worse…

This is where the rules get a little hazy again.

The aforementioned Andy raised this above Wildcard hack with one of the supposed game-makers.

Essentially, the thinking is that by playing your Wildcard ahead of Matchday 2, you’re effectively getting two Free Hit sides for Matchdays 2 and 3.

This would also be the case for the quarter-finals and semi-finals if you activated your Wildcard before the last eight.

What it requires is fairly swift action from us Fantasy managers.

If you are playing the Wildcard in Matchday 2, the message above suggests that you can overhaul your entire, locked squad (you could do this once Portugal v Uruguay is underway on Monday 28 November, for example), bringing in players you want for Matchday 3.

The fact that we’re finding this out from a video-maker with no affiliation to FIFA and the screenshot of a ‘DM’ exchange (with no verification over the contact’s identity) makes us uneasy, as it could be more miscommunication or the goalposts may change yet again.

But if it’s true, it’s a real strategy-changer.

Finally, some illumination on the captaincy.

However, you do have the option to change your captain after the Matchday has started according to the following rules:

You can change your captain an unlimited number of times between unlocked players (i.e. between two players who have both not played in the current Matchday).

Changing Your Captain After He Is Locked

You have one opportunity each Matchday to change your captain after he has locked (eg after his team has played their match).

However, in this situation, you can only change your captain to a player who has not yet played in the Matchday (i.e. an unlocked player).

Once you have confirmed this change, you will not be able to change your captain again during the current Matchday.

Let’s give another example. Say it’s Monday evening and you previously captained Harry Kane ($11.0m) but he blanked in England’s clash with Iran. The rules say you could have a second bite of the cherry with the armband, backing another player who has yet to play (eg Lionel Messi (£10.5m)).

It’s effectively the UCL Fantasy captaincy rules rather than the Sky ones.

You may have noticed that the key pass bonus disappeared from the scoring matrix yesterday – this has now been reinstated and midfielders will, indeed, still get a bonus point for every two key passes made.