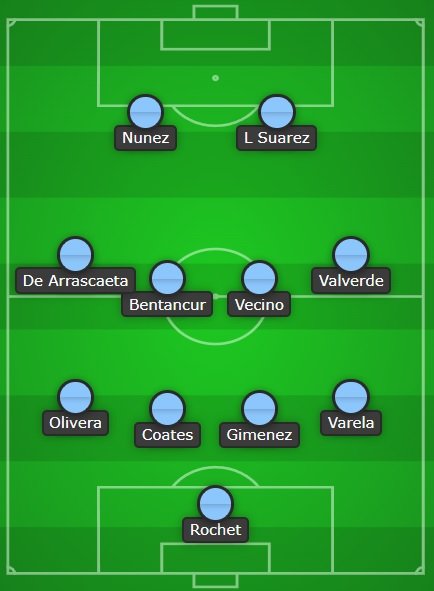 Our World Cup Fantasy team previews continue with a look at Uruguay, a small country whose squad is once again filled with names from many of the world’s elite clubs.

In these country-by-country guides, Fantsay Football Scout be looking at the best players from each nation, taking a stab at predicted line-ups, reviewing the road to Qatar and more.

Although used to qualifying for modern World Cups, this campaign was far from simple for two-time champions Uruguay.

Yet winning their final four brought relief, as the Uruguayans look to improve on recent quarter-finals of the last World Cup – where they defeated reigning European champions Portugal before losing to eventual winners France – and the two Copa Americas since.

The switch from Tabarez to Alonso took place last December after four defeats rounded off a poor year. 2022 has been much better though, winning seven of nine matches and conceding just twice.

The 3-0 win versus Mexico was impressive, although September brought a surprising loss to Iran.

On paper, Group H looks closer than most. Yet recent form has caused optimism back in Uruguay and with good reason – they are good enough to reach the quarter-finals.

Transitioning to a new coach following a 15-year era could have been problematic but their 2022 results have been superb.

There’s a legitimate concern over pace at centre-half, while the goalkeeping pool is short of a world-class option.

An advantage of having the final games of a Matchday is that you can manually substitute out players who have blanked and replace them with Uruguay names from your bench.

Valverde’s 20.9 per cent ownership makes him the most-selected midfielder behind Kevin De Bruyne ($11.0m), although it’s worth tempering expectations a bit despite his goalscoring form for Real Madrid: operating in a slightly different role than he does at club level, Valverde had only three shots in the box in the whole of qualifying and none in the two most recent friendlies.

Nunez will be hoping to continue the form which heralded a weekend Premier League brace against Southampton in Gameweek 16 and the indications are that he’ll be up front with Luis Suarez, who is set to reunite with Ghana after the explosive end to the two nations’ 2010 World Cup quarter-final.

The penalty-taking Suarez had almost three times as many big chances as any of his team-mates in qualification, although Nunez was a peripheral figure for most of that.

Sergio Rochet ($4.0m) is – we think – a very cheap starting goalkeeper and only an injury is preventing Araujo from having the same appeal. A potential midfield bargain could be Giorgian De Arrascaeta ($5.5m), who scored five times during qualifying.

Alonso’s mind is probably one of the hardest to predict going into this tournament. He’s just as likely to play 4-4-2 as he is 4-3-3, with Nicolas de la Cruz ($5.5m) and Matias Vina ($4.0m) also possible starters ahead of De Arrascaeta and left-back Mathias Olivera ($4.5m).