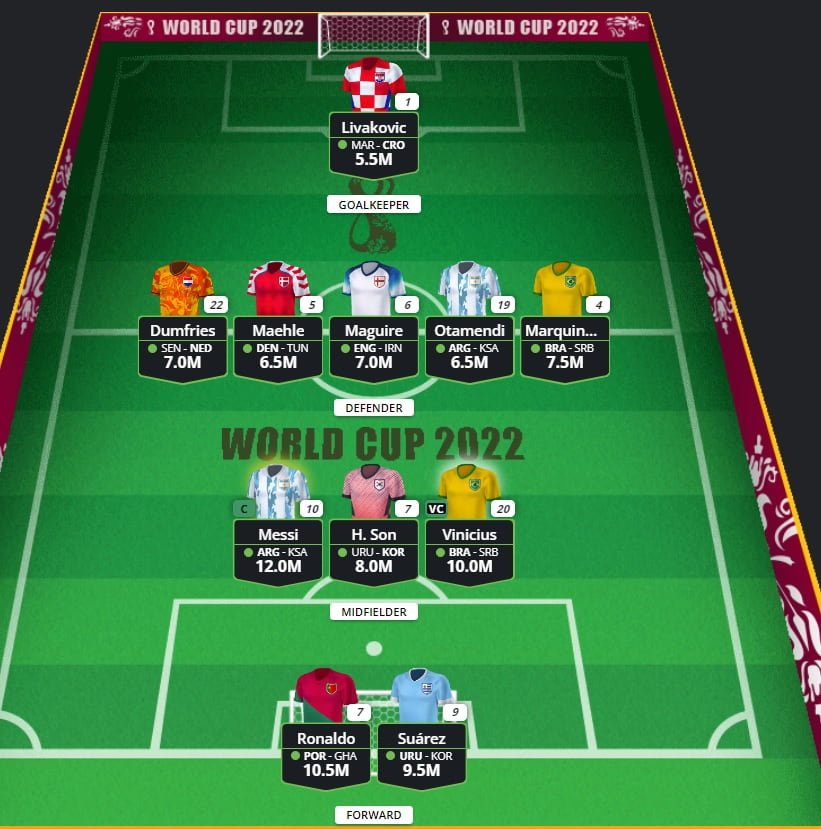 There are just hours to go until the 2022 FIFA World Cup starts, so it’s time to start nailing down those picks for FanTeam’s World Cup Fantasy game.

There are two different types of game depending on your level of interest, with the single-entry version set up for those of you who don’t want to compete against managers who submit dozens of cover-all-bases teams.

The prize pool – which now increases with every entry – is already up to £88,000 in the single-entry game, having initially been a minimum £50k!

We’ve covered the rules and scoring system in a separate article, so now we get editor Neale’s picks for Matchday 1 and beyond.

While the official game and its clear-as-mud rules seem to be pointing us in the direction of only looking ahead to the very next Matchday, there is a bit more medium-term planning required with FanTeam.

For starters, the Wildcard doesn’t kick in till before the quarter-finals. So anticipating who will make it through to the last 16 is quite important, as you don’t want to be left with a squad full of knocked-out players who are on the plane back home.

You do admittedly get two free transfers ahead of the round of 16, plus you can continue to roll your transfers through the group stage – but it’d be nice to be in a luxury position to target the strongest fixtures in the last 16 and move off any hard-to-call matches, say if Argentina and France met in the first knockout round.

Another thing I’m paying attention to here is the bonus, which is rewarded for shots on goal:

Hence why I’ve gone big on trigger-happy players in my draft, starting with the defence.

Above image taken from our Premium Members Area

Maguire is the stand-out name for all the wrong reasons, after his much-maligned displays for the last… well, as long as anyone can remember.

But no-one can deny his goal threat when he sticks on the Three Lions jersey and, even if Gareth Southgate sees sense and drops him from the starting XI, FanTeam’s Safety Net feature means that I get another one of England’s crop of £7.0m-rated defenders promoted in his stead.

Speaking of the Safety Net, that’s why I’ve gone for Vinicius Jnr.

He’s not guaranteed a start against Serbia in the slightest (the opposite looks like it might be true) but if I pick him, I’ve basically got an attack-minded Brazil midfielder of some variety playing right the way through the group stage.

“All non-starting players will be replaced at the beginning of their match, if there is a player from the same [nation], in the same position, with equal or cheaper price. Closest price chosen first” – FanTeam’s Safety Net rule

Regulars Raphinha and Lucas Paqueta are £0.5m and £1.0m cheaper than Vinicius and will cover any benching for the Real Madrid man, while if Brazil are already qualified by Matchday 3 and rest their first-teamers, I’m also in a good position for the appealing-looking clash with Cameroon.

My remaining four attackers are all fairly nailed in their sides and are greedy in the best possible sense when it comes to those bonus-collecting shots.

Between the four of them, they racked up 192 efforts, 38 big chances and 76 shots on target in a combined 48 qualifying games, and they’re all (we assume) penalty-takers for their respective nations.

And in the tough-to-call Group H, I’ve got one player from the three teams who could realistically qualify so that I’m not putting all of my eggs in one basket and left short of numbers come the last 16. Son Heung-min‘s low price was also a contributing factor.

Between the posts, I’ve gone fairly budget with Dominik Livakovic. There are around 10 starting goalkeepers who are more expensive that the Croatia man so I think he could offer value with Morocco and Canada up first, while Belgium could already be home and hosed by the time the Group F favourites meet in Matchday 3.