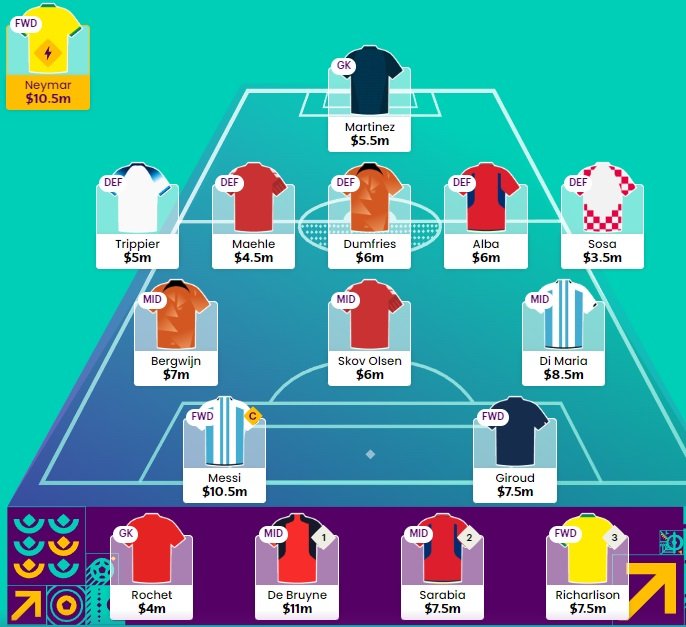 Matchday 1 of the World Cup is almost upon us, so we’ve finally nailed down our Scout Picks selection for the official FIFA game.

For everything else you might need ahead of today’s deadline, from team previews to predicted line-ups, check out our complete guide.

Don’t forget to enter our tournament predictor game this afternoon for a chance to win £500, while a reminder that Premium Memberships for this site will now include all Opta player and team from not just World Cup qualifying but the tournament proper itself!

CHANGES FROM THE BUS TEAM

Karim Benzema‘s ($11.0m) tournament-ending injury has set off a chain reaction with our selection.

The Real Madrid man himself wasn’t in our first draft but his injury-enforced exit has raised the game-time prospects of Olivier Giroud ($7.5m) and prompted a rethink.

Our changes from the ‘bus team’ are as follows:

While there were understandable reservations about losing Kylian Mbappe ($11.5m) and Lautaro Martinez ($8.0m) in particular, the reshuffle has left us with a stronger-looking squad – and with manual substitutions allowed in the FIFA game, a deeper bench should end up being an advantage.

We’ve still got representation from the attacks of France and Argentina in the form of Giroud and Angel Di Maria ($8.5m), as well as Lionel Messi (£10.5m), while we’ve now got a double-up on the potent Brazil frontline with the acquisition of Richarlison ($7.5m) alongside ’12th Man’ Neymar ($10.5m).

We also now possess two options from Spain ahead of their plum-looking tie against Costa Rica.

Jordi Alba ($6.0m) racked up a team-high four assists during qualifying and topped the key pass column for his nation, while Pablo Sarabia ($7.5m) boasted the best minutes-per-chance-created average in Luis Enrique’s squad. With midfielders getting a bonus point for every two key passes, Sarabia could tick over nicely.

Ten players remain from our initial ‘bus team’ picks and, to avoid the risk of repeating ourselves, you can read about the rationale behind their selections in this article here.