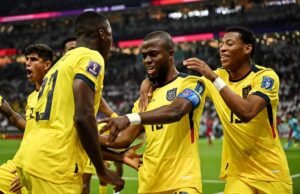 We round up the key Fantasy talking points from Qatar v Ecuador in our Scout Notes summary.

The graphics and numbers you see in this article are from our Premium Members area, which now includes all Opta player and team data from not just World Cup qualifying but the tournament proper itself!

In an eventful start, Valencia thought he had given Ecuador the lead in the third minute but the goal was ruled out after a VAR review.

However, shortly after, he was tripped by Qatar goalkeeper Saad Al Sheeb ($4.0m) and converted from the spot, before adding a second when he headed in Angelo Preciado’s ($4.5m) cross.

Above: Valencia scored two goals from his only two shots against Qatar in Matchday 1

As a result, his brace of goals will have delighted anyone who handed him the armband in Matchday 1, although at the time of writing, we’re still waiting for the official FIFA games points to be updated.

His fitness, however, will need to be monitored ahead of Friday’s meeting with the Netherlands, having received treatment on his knee in the first half. Saying that, the fact he lasted 77 minutes before he was substituted suggests there is no immediate cause for alarm.

Defensively, it was a comfortable evening for Ecuador, who restricted Qatar to just five shots and two penalty box touches.

Preciado, meanwhile, supplied the assist for Valencia’s second goal and posted some decent underlying numbers, including three successful crosses and 17 final-third touches – only Valencia and Gonzalo Plata ($4.5m) could beat the latter total.

Ecuador have now kept a clean sheet in each of their last seven matches, with Argentina’s Julian Alvarez ($6.5m) the last player to score against them back in March.

For Qatar, the result means they are the first World Cup host to lose its opening match.

And with African champions Senegal and Louis van Gaal’s Netherlands also in Group A, it won’t get any easier.

Their best chance arrived in the first half, when Almoez Ali ($4.5m) headed wide from six yards out despite being unmarked.

However, in transition, they were regularly caught out of shape, which bodes well for owners of Senegal and Netherlands attacking assets who meet Qatar in the next two rounds.