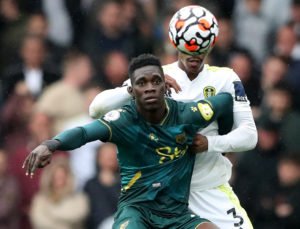 Matchday 2 of World Cup Fantasy is almost upon us, which gives us an opportunity to have a look at some differential options for the official FIFA game.

For everything else you might need ahead of Friday’s deadline, check out our complete guide.

Ismaila Sarr’s ($6.5m) performance was one of the few highlights for Senegal in Matchday 1, as they lost their opening World Cup game 2-0 to the Netherlands.

The Watford forward, who played on the left of a front three and stayed on for the duration, was arguably the most potent attacking weapon on either side and asked plenty of questions of Dutch centre-back Matthijs de Ligt ($5.5m).

Indeed, Sarr created more chances (four) than any other player on the pitch, also registering three shots and winning three of his four attempted tackles.

Now, he will fancy his chances with more space to attack against Qatar, who were woeful in their opener against Ecuador on Sunday, especially defensively.

That presents an opportunity for Sarr to step up and deliver. There’s even a chance he might be on penalties.

Poland may have underwhelmed in their first game of the tournament as they drew 0-0 with Mexico, but will now look to bounce back against Saudi Arabia in Matchday 2.

In the opening round, Robert Lewandowski ($10.0m) had the perfect opportunity to score his first World Cup goal, only for his penalty to be saved by Guillermo Ochoa ($5.0m).

Aside from the spot-kick miss, Lewandowski was starved of service, touching the ball just three times in the opposition penalty box and 42 times overall.

However, he now faces a Saudi Arabia side that, whilst impressive against Argentina, do concede chances with their aggressive, high line.

Lewandowski has scored 76 goals in 137 appearances for Poland and contributed to 13 goals in 2022 World Cup qualification, including nine goals and four assists.

That suggests he can deliver in Matchday 2, with his ownership in the official FIFA game sitting at just 3.4 per cent at the time of writing.

Gareth Bale ($8.0m) will overtake team-mate Chris Gunter ($3.5m) as Wales’ most-capped man if he plays in Matchday 2, and who’d bet against him crowning that achievement with his second goal of the Qatar World Cup.

The former Real Madrid man extended his record to 41 international goals with a late penalty he won himself against USA.

Now, he faces an Iran side that were crushed by England in Matchday 1, despite having kept clean sheets in six of their previous nine matches going into the tournament. They will also be without number one Ali Beiranvand ($4.0m) after he suffered a concussion and broke his nose against the Three Lions.

As for Bale, with set-pieces, penalties and an attacking, almost free role in his locker, he has plenty of routes to points.

It’s also worth noting that no side conceded more chances from the centre zone than Carlos Queiroz’s side in Matchday 1, raising the prospect of assist points for Bale too.