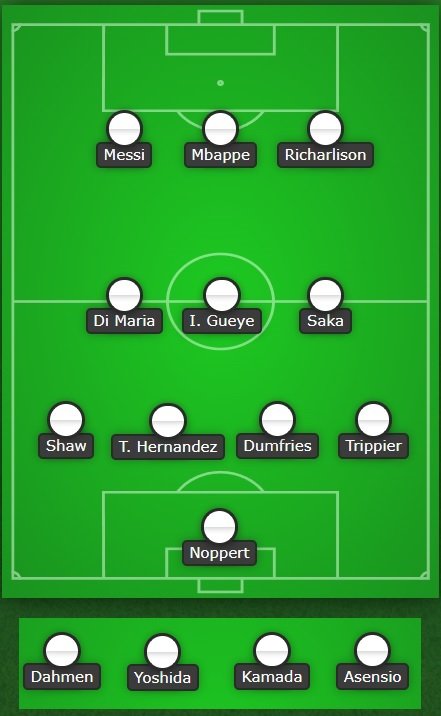 Matchday 2 of World Cup Fantasy is almost upon us, so we have chosen our best players for the upcoming round of the official FIFA game.

For everything else you might need ahead of Friday’s deadline, check out our complete guide to Matchday 2.

The Netherlands looked flat in Monday’s Group A meeting with Senegal, but marshaled by Virgil van Dijk ($6.0m), restricted their African opponents to just 0.73 expected goals (xG) and no ‘big chances’. Noppert, meanwhile, made four saves, commanded his area well and was very comfortable on his debut.

As for Dahmen, he racked up five saves as Tunisia played out a goalless draw with Denmark in Matchday 1, which included a fine stop from Christian Eriksen’s ($8.0m) curling effort. Calm and composed when coming off his line, he now faces Australia on Saturday.

EURO 2020 hero Denzel Dumfries ($6.0m) retains his place in the Scout Picks XI, after getting himself into some good positions in the final third against Senegal on Monday. The attack-minded wing-back had to settle for six points in the official FIFA game, courtesy of the Netherlands’ clean sheet, yet his underlying numbers – five penalty box touches, three attempted crosses – hint that there is more to come.

With Lucas Hernandez ($5.5) set to miss the rest of the tournament through injury, Theo should return to France’s starting XI for their Matchday 2 clash with Denmark. The AC Milan defender replaced his brother earlier this week and was positioned high and wide with central midfielder Aurelien Tchoumanei ($6.5m) filling in at left-back when he went forward. No defender has created more chances than Hernandez in Matchday 1 at the time of writing, with his two shots only bettered by Antonio Rüdiger ($5.5m).

Trippier and Shaw were excellent for England against Iran and offer outstanding value at just $5.0m, while Maya Yoshida ($4.5m) is able to come off the bench if either of the pair blank. The former Southampton defender impressed in Japan’s shock 2-1 victory over Germany in Matchday 1, putting in some super last-ditch blocks. His side’s intense pressing game rattled the Germans in the second half, with Costa Rica, who have just lost 7-0 to Spain, up next.

With Argentina’s next fixture against Mexico taking on extra significance after their loss to Saudi Arabia, we’ve once again turned to Angel di Maria ($8.5m) in the Scout Picks. His selection admittedly doesn’t fill us with too much confidence, yet Matchday 2 does present a tricky set of fixtures to navigate, with several of the big guns facing off against each other. As for Di Maria, he produced cross after cross against Saudi Arabia, creating two chances for his teammates. His lack of end product was notable, but you’d expect his creativity to come to the fore in this must-win Group C clash.

Bukayo Saka (£8.0m) is one of only five players to score twice in Qatar so far, with his brace of goals against Iran on Monday one of the standout moments of the opening round. Two cracking finishes in each half from the winger helped England to a 6-2 victory, with his three shots on target and five penalty box touches team-leading totals. Opponents USA won’t roll over, but you’d back the Three Lions to score in this one.

Next up are two intriguing mid-price differentials, both of whom have appealing fixtures and the potential to go ‘big‘ in Matchday 2.

Everton midfielder Idrissa Gana Gueye ($5.5m) takes up a more advanced role for Senegal and is on set-pieces, while Japanese dangerman Daichi Kamada’s ($5.5m) has developed into one of Eintracht Frankfurt’s key players in recent times.

Senegal and Japan meet Qatar and Costa Rica respectively in Matchday 2, arguably the two most appealing fixtures in the round.

While Germany will present a tougher test than Costa Rica, Die Mannschaft were still open against Japan and conceded more shots in the box than 27 other nations in Matchday 1. Only four countries allowed more big chances, meanwhile.

Here, we’ve plumped for ‘false nine’ Marco Asensio ($8.5m) from the Spain attack, although there was nothing false about his underlying numbers – five shots, three efforts in the box, six penalty area touches and a goal – on Wednesday.

With us having the luxury of seeing the teamsheets before Sunday’s game, we can always switch around our Spain representative if Luis Enrique springs another surprise with his teamsheet.

Paris Saint-Germain trio Kylian Mbappe ($11.5m), Lionel Messi ($10.5m) and Neymar ($10.5m) were all initially included in the Scout Picks, with a whopping 32.5 per cent of our budget taken up on the three-man frontline.

But a possible injury to Neymar on Thursday evening has prompted us to switch him to compatriot Richarlison ($7.5m), who can’t stop scoring for his national side.

The Spurs man hit a brace against Serbia in the Matchday 1 closer, making it nine goals in his last seven matches for Brazil.

Mbappe headed in France’s third before setting up Oliver Giroud ($7.5m) against Australia, in an electric all-round performance that earnt widespread praise. If seven shots inside the box and 19 penalty box touches weren’t enough, he also whipped in nine crosses for his teammates. With Theo Hernandez taking up positions high and wide, Mbappe was able to drift inside closer to Giroud, a devastating combination that will test an admittedly decent Denmark backline.

Messi, meanwhile, scored a penalty and had a goal disallowed against Saudi Arabia, with Argentina looking to bounce back following their shock loss.