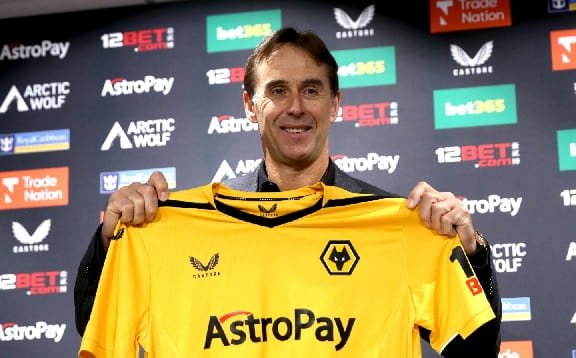 He inherits a goal-shy team that is rooted to the bottom of the Premier League, four points from safety, so a strong start is very important if Wolves want a fifth season in the top flight.

Will the 56-year-old spark a surge up the table and what Fantasy Premier League (FPL) impact will he have?

The Spaniard is one the rarest sights in football – a manager whose playing career was as a goalkeeper. Wolves also had this with Nuno Espirito Santo.

His good managerial record is perhaps tainted by a newsworthy few months in 2018 that saw him lose high-profile jobs at Spain and Real Madrid.

After being heavily linked with the Wolves job in 2016, Lopetegui’s previous European Championship success with Spain’s under-19 (2012) and under-21 (2013) sides instead saw him named as manager of the senior side.

Unbeaten throughout his 20 matches, Real Madrid announced on the eve of the 2018 World Cup that Lopetegui would become their new head coach after the tournament. So he was instantly removed as national boss.

Four-and-a-half months later, a horrific run of five losses from seven included the longest goal drought in Real Madrid’s history and climaxed with a 5-1 humiliation to rivals Barcelona. Whilst a slight transitional period was expected after the summer departures of Zinedine Zidane and Cristiano Ronaldo, his 14 matches were deemed disastrous.

Yet he began the next season as Sevilla’s manager and soon rebuilt his reputation, leading them to three successive fourth-placed finishes and a Europa League trophy.

They beat Wolves 1-0 in the quarter-final en route to that success.

A win rate of 52.9 per cent took place during his 170 Sevilla matches, alongside 70 per cent and 68 per cent from stints at Spain and Porto.

However, this current campaign began with just one win from ten outings in all competitions. Inadequate replacements came in after the high-profile departures of Jules Kounde and Diego Carlos (£4.7m), who is now at Aston Villa. Lingering in 17th place, the Andalusians chose to terminate Lopetegui’s contract.

One factor that could have influenced Wolves’ poor start is the shift from an established back-three system to a four-man defence. Yet Lage’s downfall may benefit Lopetegui, as he exclusively uses either a 4-3-3 or 4-2-3-1 formation.

A meticulous tactician who wants his teams to play with a high tempo and intense counter-press, he likes short passing and encourages his extremely attacking full-backs to create overloads high up the pitch.

Such full-backs have included Marcelo, Alex Sandro, Danilo, Dani Carvajal, Sergio Reguilon and Marcos Acuna. Remember former Manchester City winger Jesus Navas? He has been converted into one too.

By providing attacking width, it allows the pair of inside forwards to be narrower and link up with a fluid midfield that passes its way through opponents.

Providing balance is a deep-lying midfielder. When the team is attacking, he will sit back and be based alongside the two remaining defenders.

It says a lot about Lopetegui’s organisation that such use of full-backs hasn’t led to a defensive problem. Sevilla kept 22 clean sheets last season and had the best backline in La Liga.

“The thing about Lopetegui’s teams is that every single player knows their roles to a tee. The coaching of player roles and tactical details is so extreme.

“The problem with that is there’s very little space for individuality, so whenever the system is combated and isn’t working, there’s a lack of imagination and creativity. Those are the main criticisms you would have of how he sets up. You get a team that is very well drilled, that knows their roles inside out, and when it works it’s very good – but there is that flaw.” – Colin Millar, La Liga reporter

Meanwhile, up front, he likes his sole forward to be more of a false nine – drifting wide and away from goal, before arriving late in the box to attack crosses. It’s proved particularly effective with Luuk de Jong.

As revealed in our club-by-club look of which players at the World Cup, Wolves only have four outfielders taking part.

That means Lopetegui will get to spend a lot of time with most of his squad before the first league match on 26 December.

We may even get a first glimpse at what he has planned, tactically, in the Carabao Cup match against Gillingham, six days before the restart.

However, he’s not helped by the fixture run, as Wolves rank worst on our Season Ticker over the next six Gameweeks before some more appealing matches from Gameweek 23 onwards.

Wolves are the league’s lowest scorers with just eight goals from 15 outings, so FPL managers would be wise to adopt a wait-and-see strategy with the likes of Raul Jimenez (£6.8m), Diego Costa (£5.5m) and Goncalo Guedes (£5.9m).

Of course, another obstacle will be the imminent January transfer window, where Lopetegui is likely to bring in trusted names. Stuck in 20th, neither he nor Wolves have the time to mess around.