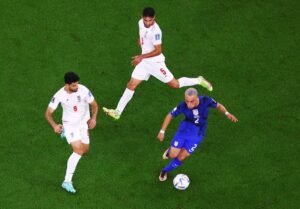 Matchday 4 of World Cup Fantasy is almost upon us, which gives us an opportunity to have a look at some differential options for the official FIFA game.

The USA are set to meet Netherlands on Saturday in the World Cup last 16, a match which carries extra significance for defender Sergino Dest ($5.0m).

The 22-year-old was born in the Dutch town of Almere and came through the famed Ajax academy. However, thanks to his American father, Dest has played international football with the United States.

In Matchday 3, Dest played a key role in his side’s must-win match against Iran, providing the assist for Christian Pulisic’s ($7.5m) goal. The on-loan AC Milan full-back was a constant threat down the right flank, always probing and looking to cut inside and create chances for himself and his teammates.

His assist capped off a stellar performance, with his 36 final-third touches, 24 passes received in the final-third and six take ons match-leading total’s. He also carries a bit of goal threat: only two defenders have registered more shots than Dest in Qatar at the time of writing.

“The full-backs have been doing a good job. We wanted them to be a little bit more offensive today. And we got an assist from [Dest]. So it’s a good thing. We need our full-backs to be aggressive, and it was good that they showed that today.” – USA coach Greg Berhalter

The Dutch have a talented group of players but have failed to hit top gear yet, while the US defence have conceded just one goal and none from open play in the group stage, with their backline excelling.

That suggests we could see a tight, cagey affair in Matchday 4, with defences potentially coming out on top.

Having come into the team in place of Lautaro Martinez ($8.0m), Julian Alvarez ($6.5m) grabbed his opportunity in Matchday 3, hitting a sublime strike as Argentina clinched their place in the last-16. He also went close to adding a second but fired into the side-netting before he was withdrawn with the game won.

Alvarez was given his first World Cup start after making a significant impact from the bench in Argentina’s win over Mexico in their second group game.

In Qatar, the Manchester City forward has posted some eye-catching underlying numbers.

Alvarez is averaging 4.14 shots inside the box per 90 minutes, with two big chances racked up to date. For context, Lionel Messi ($10.5) is running at 3.00, having recording the same amount of big chances, despite being on the pitch for over 110 additional minutes.

Now, Argentina meet Australia on Saturday. The Socceroos’ did well to progress from their group ahead of Tunisia and Denmark, but only Costa Rica allowed more shots than them in the group stage, with eight big chances conceded against France alone in Matchday 1. That tells us the World Cup’s best attacks can get at their defence, which could be good news for Alvarez and co in Matchday 4.

Andrej Kramaric ($6.0m) impressed for Croatia in the group stage, netting two goals against Canada in Matchday 2. In addition, the dynamic forward also had a fine early finish ruled out following a tight offside call.

In Matchday 4, Croatia meet Japan, who have failed to keep a single clean sheet so far, allowing 15 shots on target, which ranks fifth worst among all nations at the World Cup.

As for Croatia, their attack has generally functioned well, as they rank seventh for big chances, despite facing Morocco and Belgium in the group stage. As a result, you’d expect them to ask plenty of questions of Japan’s defence on Monday, with Kramaric expected to lead the line in Zlatko Dalic’s 4-3-3 formation.