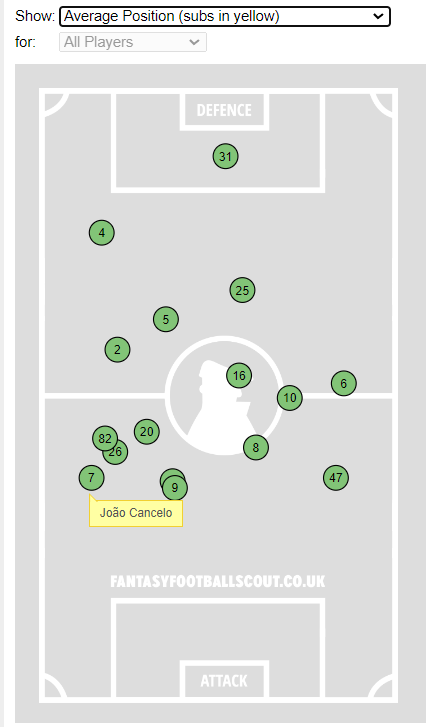 Manchester City’s narrow victory over Chelsea is the focus of our latest Scout Notes piece.

The Citizens are one of two teams who potentially ‘double’ in Gameweek 20, so keen eyes were on Pep Guardiola’s side at Stamford Bridge for any pointers.

The numbers you see in this article are taken from our Premium Members Area, where you can access Opta player and team data for every single Premier League fixture.

Normality was briefly restored to the Manchester City line-up on Thursday evening as Phil Foden (£8.2m), Kyle Walker (£4.8m) and Joao Cancelo (£7.3m) were handed their first league starts since returning from the World Cup.

There was more mumbo jumbo from Pep Guardiola when he was asked about his teamsheet ahead of kick-off, with even the man himself admitting that the reasons for his selections change from week to week.

“Everybody asked for this lineup, I follow my fans! We’re not going to discover what they mean Kyle and Joao and these people, they come back from World Cup with niggles, don’t come back settled. And Rico [Lewis] and the other guys have been fantastic.

“Before every game the guys ask me the reason why [I select each team], sometimes is not a specific reason why. I want to rotate the team, get everyone involved. Sometimes I pay attention for the opponent, sometimes for the tactics or the quality of the players we have, I don’t care for the tactics today.

“There’s not one specific reason I decide. Since I arrived, I’m not a guy who plays 11 players every time. Because you cannot handle the locker room. When the players don’t play they have to have the feeling they can play at a certain level. 11 months if one guy doesn’t play, it’s not nice.

“I take a look individually how they are when they come back, the happiest by far was Julian [Alvarez]. Step by step, take a look first day, second day, how they’re training. It is important to look at the body language, the mood, how they look. Try to take a good decision with the lineup. Step by step the guys come back to reality and ready to play every game.”

It was a curious tactical set-up from Guardiola, who opted for a 3-5-2/4-4-2 hybrid system with Cancelo pushed high up the right wing ahead of Walker. Foden, meanwhile, was deployed on the opposite flank, with Kevin De Bruyne (£12.5m) supporting Erling Haaland (£12.2m) through the middle.

Effectively ‘out of position’ on the right wing, it all boded well for Cancelo. And then came a half-time withdrawal.

…AND WHY HE TOOK THEM OFF

The new system and the players within it didn’t work. Chelsea were the better team in the first half so off came Cancelo and Walker at the interval, with Foden and Bernardo Silva (£6.8m) getting ignominiously hooked less than a quarter of an hour later.

Guardiola was full of remorse for his Cancelo substitution but Lewis’s fine display and Guardiola’s ongoing praise for the teenager does again call into question Cancelo’s game-time prospects in the provisional Double Gameweek 20.

“I’m so sorry for Joao, I ask him to play in an [unnatural] position. But of course in the second half the impact from Rico, Manuel as well but especially Rico, and our rhythm from minute one was clear.” – Pep Guardiola

“This young boy has the ability and quality to not just play good, but to make his mates better. This is so difficult to find.

“When he came in Rodri played better, Kevin played better, Riyad played better, he has the talent to do this. Since we came back he is playing and right now he is fundamental to us, he’s a key player for us the way we’re playing right now.

“The dynamic for Rico – tac-tac, move, right, left, inside – helped everyone have that rhythm, that’s why he changed the game. He changed the game with his dynamic from minute one.” – Pep Guardiola on Rico Lewis

All of this uncertainty at the back will only raise Ederson‘s (£5.4m) stock ahead of next Friday’s deadline, with the Brazilian the only name we can pretty much guarantee will get game-time at the rear.

As for Foden, a quiet performance was made worse by his replacement, Jack Grealish (£6.8m), beautifully teeing up Riyad Mahrez (£7.5m) within three minutes of the pair’s introduction. It’s now three attacking returns apiece for Grealish and Mahrez since the Gameweek 17 restart, a total only two other FPL midfielders can beat.

Does Foden now get splinters in his backside again in Gameweek 20 after Thursday’s second-half revival? There are two cup games’ worth of information to come before we get to the next FPL deadline but right now, based on his positional rivals’ purple patches and the counter-attacking styles of United and Spurs, Foden would have to be third-favourite to get one of the two wing spots.

“All the managers try to make the subs to improve the team. Sometimes you see a team who are losing but are playing good, why should we change when I have the feeling we’re doing well, why should we do it?

“Today after 20 minutes I realise I don’t like what I’m seeing. Why we have to wait? That moment I spoke with Rodo and Enzo and said we have to move something, to change something, otherwise it will be more difficult.

“Everyone saw it, in the first minute of the second half it was a completely different Man City, another rhythm, another game, and our recovery with everyone in their position.” – Pep Guardiola

Missing out on Thursday was the most-bought Chelsea player of Gameweek 19, Mason Mount (£7.6m), while Raheem Sterling (£9.7m) and Christian Pulisic (£5.7m) both limped out of the contest before we’d reached the midway stage of the first half.

The good news for Mount owners is that he would appear to have a good chance of facing Fulham next Thursday, if the below is true.

“It doesn’t make it any easier. It’s too soon [to know the extent]. Raheem, it was his first action in the game, a strange one, a back heel. Christian’s, he was running at full pelt and it’s a blocked shot and contact with his knee. Fingers crossed it’s not too bad.

“Mason [Mount] got a kick yesterday in training, again we’re hopeful for the weekend but it’s one of those things at the moment. I’ve never experienced anything like it and I’d ideally not want experience it here. But it is what it is, I have to just carry on.”

There were blanks across the board for Chelsea assets but it was a decent enough display against the reigning champions, whose 21-goal striker was largely nullified by a defence that hadn’t completely convinced under Potter previously. Kevin De Bruyne (£12.5m) also looked more like he had chocolate coins in his belly than fire, although did improve after the break.

Above: Haaland was deemed to have had a ‘big chance’ against City but the 72nd-minute opportunity needs to be put in context, as the ball across from De Bruyne was too far in front of him; think Paul Gascoigne v Germany in Euro ’96

Marc Cucurella (£5.2m) is the most-selected member of the hosts’ backline in FPL but there might be a few nervous owners waiting on the west London derby teamsheets next Thursday. Cucurella was partly culpable for the City goal and was substituted soon after, with his replacement, rookie Lewis Hall (£4.4m), really catching the eye.

Carney Chukwuemeka (£4.3m) and Omari Hutchinson (£4.5m) were also thrown on even though the result was all to play for; Potter’s not a manager scared to blood youngsters when he deems fit, so just because Ben Chilwell (£5.8m) remains out, it doesn’t mean that Cucurella is nailed in the mean-time.

“Young players, starting out, and it’s a big responsibility to represent this club but they did it well. Lewis has played a couple of games for us and has been fantastic.” – Graham Potter