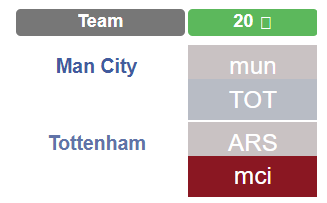 Following the results of this weekend’s FA Cup third-round ties, we now have a confirmed Double Gameweek 20 of Fantasy Premier League (FPL).

Neither Tottenham Hotspur nor Manchester City required a replay to settle their respective cup matches against Portsmouth and Chelsea, so their ‘provisional’ Double Gameweek 20 becomes a confirmed one.

Both sides are involved in local derbies on the weekend of January 14/15 before they meet at the Etihad on January 19.

The doubles don’t end there.

Manchester United’s progress to round four of the FA Cup and Crystal Palace’s elimination at the hands of Southampton means that neither club will be involved in a third-round replay in the otherwise free midweek after Gameweek 20.

Their outstanding fixture at Selhurst Park has now been rerranged for that slot.

United face their cross-city rivals before heading to south London, while Palace are away at Chelsea before entertaining the Red Devils.

Further reaction will follow later this evening and tomorrow.