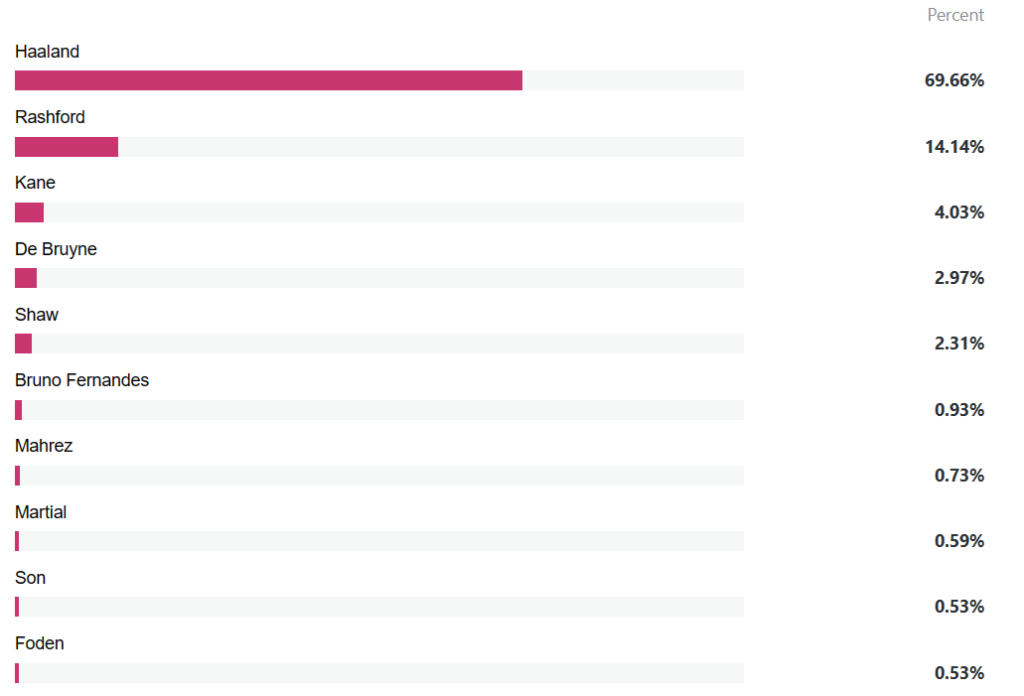 Fantasy Premier League (FPL) managers are bracing themselves for a second successive Double Gameweek, pondering a long-term chip strategy and forecasting expected points while their fingers twitch nervously over the Triple Captain chip.

Norwegian marksman Erling Haaland (£12.2m) leads a cavalcade of Double Gameweek captaincy hopefuls, with candidates from Manchester United and Tottenham Hotspur providing alternate names for those with a healthy appetite for risks.

As usual, the Captain Sensible article is here to highlight which assets have the best chance of hauling – and, specific to this week, whether now is the time to use the Triple Captain chip.

First, we will assess the fallout of the captain poll, before then analysing the best options, Rate My Team (RMT) and the Premier Fantasy Tools ratings ahead of Friday’s 18:30 GMT deadline.

Haaland returns to the summit of the captain poll after a brief hiatus, backed by just under seven-tenths of total votes cast at the time of writing.

No other player has garnered more than 15 per cent, with Marcus Rashford (£7.0m) currently in second place.

When Manchester City squeaked a 1-0 victory over Chelsea in Gameweek 19, it was just the third blank in 16 Premier League appearances for Haaland. It was a subdued performance, shorn of the usual accuracy, by failing to register a single shot on target despite receiving two big chances.

Haaland’s underlying goal threat numbers over the last six matches have slightly dropped below his gold standard but 19 shots inside the box, ten big chances, and nine shots on target still place him in the division’s top four over this period.

However, shot quality usurps volume, as Haaland ranks best for both expected goals (xG) and expected goal involvement (xGI) during this time, with 5.67 and 6.15 respectively.

De Bruyne registered his third blank in a row during the win at Chelsea, continuing his underwhelming form since the restart. However, owners can count themselves unfortunate – over the three Gameweeks, De Bruyne boasts the second-biggest negative xGI delta (-1.93) in the division.

Analysing over the customary last six matches, the Belgian leads the division for chances created (23) and is third for big chances created (6). Just a solitary Fantasy assist has arrived, highlighting his downturn in production.

Man City’s juggernaut attack has regressed to the mean over recent matches, in comparison to their early season over-production. Their xG of 12.97 exceeded nine actual goals.

Pep Guardiola’s troops travel to Old Trafford next, against a Manchester United side that is rejuvenated under authoritarian manager Erik ten Hag. Their four-game Premier League winning streak has buoyed confidence amongst supporters but a red-hot derby test awaits.

Defensively, they place inside the top three for clean sheets and preventing both shots inside the box and big chances over the last half-dozen matches.

Man United’s defensive improvement should be counter-balanced against the generous opponents of late, facing four of the Premier League’s current bottom six.

Worryingly, Spurs place in the bottom four for chances conceded in central positions (26) – an ominous statistic given Man City top the division for chances created (92), with 41.3 per cent of these arriving in the middle.

Analysing at a team level, Rashford’s underlying numbers highlight his importance for ten Hag’s attack, as his 13 shots inside the box and nine on target are best amongst team-mates over the last six.

However, his numbers do not stand up to scrutiny when measured against division-leading peers, ranking eighth in the division for non-penalty expected goals (NPxG, 2.28).

By scoring a penalty during Man United’s 3-1 FA Cup win over Everton – taken while Bruno Fernandes (£9.8m) was on the pitch – it suggests that Rashford might now be the first-choice taker, which further strengthens his credentials.

First opponents Man City have lacked their trademark defensive resoluteness for much of this campaign, with Guardiola’s rear-guard registering only two clean sheets over the last six matches.

However, underlying defensive numbers remain strong over that period, placing in the division’s top three for shots inside the box conceded (31) and shots on target against (18).

The second outing is at Crystal Palace, which should bear more fruit for Rashford, as Patrick Vieira’s side have recently suffered heavy home defeats to both Spurs and Fulham. The Eagles are in the bottom four for both crosses conceded (74) and chances conceded (23) from their flimsy left wing.

Spurs talisman Kane is in fine form, registering two double-digit hauls in his last four matches. A second-half masterclass at Crystal Palace brought two goals and an assist, providing a stark reminder of the rank damage that comes with not owning the England captain.

However, Kane’s underlying goal threat numbers have slumped of late, with his seven shots on target and four big chances only just placing him inside the division’s top 15 over the last half-dozen matches. An xG of 2.11 sneaks him into the top ten.

Just as important is that Kane is one caution away from a suspension and a booking against Arsenal on Sunday would see him miss their visit to Man City.

Arch-rivals and title contenders Arsenal are among the division’s elite defences, registering four clean sheets in their last six matches and placing in the top two for shots on target against (15) and big chances conceded (5) over that same period.

Kane travels to Man City for the second part of a gruesome double-header, versus the two best sides for non-penalty expected goals conceded (NPxGC).

A big consideration ahead of Double Gameweek 20 is whether to deploy a Triple Captain chip, with Haaland the leading candidate. He is backed by over one-quarter of the total votes cast by our users at the time of writing.

Notably, accordingly to LiveFPL, approximately one-fifth of managers currently in the top 10k have already used their Triple Captain chip.

I met this week with Fantasy Football Scout Pro Pundit and macro-strategy expert Pras to discuss using it this Gameweek in the context of, in his opinion, an optimal overall chip strategy.

“There are a lot of reasons why a triple captaincy on Haaland makes sense this Gameweek. He is off the back of a World Cup break, is injury-free and got a full rest in FA Cup third round. Add to that the fact that, outside of Gameweeks 20 and 23, other potential doubles will come around Champions League matches and could present conflicting chip usage (e.g. Wildcard in Gameweek 29 and Bench Boost in Gameweek 34).

“Tougher fixtures also mean higher expected minutes and a low risk of rotation. However, Man United’s defence has improved substantially since the 6-3 thrashing at the Etihad and Spurs should sit back for the majority of the game. Therefore, other windows may present easier fixtures and a higher ceiling.” – Pras

Manchester City’s shock 2-0 defeat by Southampton in the Carabao Cup quarter-final means that the Citizens are now guaranteed not to blank in Gameweek 25.

Haaland tops the RMT ratings for Double Gameweek 20, with the Norwegian forecast to score 12.28 points. De Bruyne comes in at second place with 10.17 points, followed by Kane with 8.35.

Our friends at Premier Fantasy Tools offer a whole range of captaincy tools on their website, one of which is the Captain Picker. They side with Kane this week, then Haaland and Rashford in third.

You can also use Premier Fantasy Tools‘ Captain Analyser to assess your armband picks for the season – and see where they went right and wrong.

Captaincy represents a straightforward proposition, with Haaland receiving the unanimous backing of the captain poll, this author and RMT.

The Nordic sharpshooter is fit, firing, and has proven himself fixture-proof ahead of a tricky double-header against Man United and Tottenham. He is fresh following his extended World Cup break and has strong expected minutes projections.

Whether to deploy the Triple Captain chip is a hot topic this week and it seems like a double-header against top-six opposition has dampened community enthusiasm.

Under consideration is whether a better future opportunity awaits on those weeks when managers are not currently planning on playing another chip.

My opinion on Triple Captain for Haaland in Double Gameweek 20 is that “a bird in the hand is worth two in the bush” and I am leaning towards deployment.

The runner-up is in-form Rashford, about to face Manchester City and Crystal Palace. His four attacking returns since the restart and the likely addition of penalties to his repertoire highlight his huge potential, but confidence is tempered by uninspiring underlying numbers.

Completing this Gameweek’s top three is Harry Kane, with the England captain in consistent form ahead of his own double. However, a booking against Arsenal would rule him out of the second fixture at Man City.