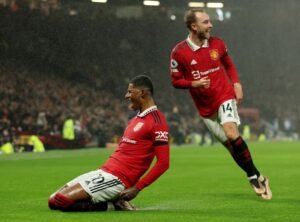 Double Gameweek 20 of Fantasy Premier League (FPL) is almost upon us, which gives us an opportunity to have a look at some more differential options.

This time, we’ve selected low-owned picks at Manchester United, Liverpool and Manchester City who we think have the potential to make an impact.

Christian Eriksen (£6.3m) has shown his value for Man Utd this season, playing an important role in their revival under Erik ten Hag.

Despite playing a deeper role, the playmaker has still been able to impact games offensively. In his last six matches, Eriksen has provided a goal and four assists.

Averaging 6.2 points per match in that time, he’s posted team-leading totals for crosses and passes received in the opposition half, whilst sitting fifth among all FPL midfielders for xA, only behind Kevin De Bruyne (£12.5m), Bruno Fernandes (£9.8m), Martin Odegaard (£6.7m) and Solly March (£5.0m).

His ability from dead-ball situations is key to his FPL appeal, with the imminent signing of Wout Weghorst – a proper target man – further boosting his potential.

Man Utd head into Double Gameweek 20 full of confidence, having lost just one of their last 10 league matches, with three consecutive wins to nil following the restart. Now, they meet Man City at Old Trafford, before visiting a Crystal Palace side that have conceded seven goals in their last two home outings.

Eriksen is one of ten Hag’s most important players and now settled into a central midfield role where he can dictate play and have a real influence on games, could be an effective mid-price differential.

Cody Gakpo (£8.0m) signed for Liverpool just after Christmas from PSV and made his debut in the FA Cup last weekend.

The 23-year-old started the 2-2 draw with Wolves at Anfield and featured for 84 minutes, lining up on the left of Jurgen Klopp’s front three. He did, however, sometimes interchange positions with centre-forward Darwin Nunez (£8.9m), which was apparent during the Uruguayan’s first-half equaliser.

During the match, Gakpo had a hand in Mohamed Salah’s (£12.8m) goal and also showed signs of forming an effective partnership with Andrew Robertson (£6.9m). While Luis Diaz (£7.8m) is more of an out-and-out winger, Gakpo likes to drift inside, allowing the Scottish full-back to hold the width on the left, where he is generally at his best. Gakpo’s signing, as a result, could potentially benefit both players going forward.

Statistically, it wasn’t a great night for Gakpo as he attempted just one shot, but there were encouraging signs.

Now, the Dutchman will have another chance to open his account for his new club on Saturday when the Reds visit in-form Brighton. Albion have won two of their three matches since the restart, but Roberto De Zerbi’s attacking approach can leave gaps for opposition attackers to exploit, which should suit Liverpool, who can be deadly in transition.

Gakpo – the reigning Dutch Footballer of the Year – is an exciting signing and at just £8.0m in FPL, an intriguing differential.

A move for Riyad Mahrez (£7.5m) ahead of Double Gameweek 20 carries risk, given how often he has been benched in the past by Pep Guardiola.

However, the Algerian winger has hit top form following the restart, returning either a goal or assist in each of his three league outings, a period that has seen him average 7.0 points per start.

In addition, he claimed a brace of goals to help City secure a dominant 4-0 FA Cup third-round win over Chelsea and was also on target in last month’s 3-2 EFL Cup win over Liverpool.

“The quality of Riyad is everything. He loves to play football, he helped us to play the game. It was really good. It was a fantastic free-kick. He played an outstanding game. He never lost his love. He loves to play football. The way he is training now and playing was exactly the same in Abu Dhabi. Riyad in important games is fantastic. The last game he didn’t start at Stamford Bridge and the impact he had was incredible. When they play in this way, and maybe complain [about not playing every game] I say ‘yes, you’re right’. Before, he cannot complain because he wasn’t playing at the level he is now. It’s not just about quality, it’s more in football, you have to do more. [But] now since we came back for World Cup, he is playing really, really well.” – Pep Guardiola on Riyad Mahrez after last weekend’s 4-0 FA Cup win over Chelsea

It’s a double-header for Man City in Gameweek 20, as they travel to Man Utd before hosting Spurs on Thursday.

After being rested against Southampton in the EFL Cup in midweek, you’d expect Mahrez to start at least one of those games, perhaps both, with his potential clear when handed minutes. Indeed, he produced six double-digit hauls in just 15 league starts last season.

Owned by just 3.1% of managers, Mahrez has the potential to propel his owners up the ranks.