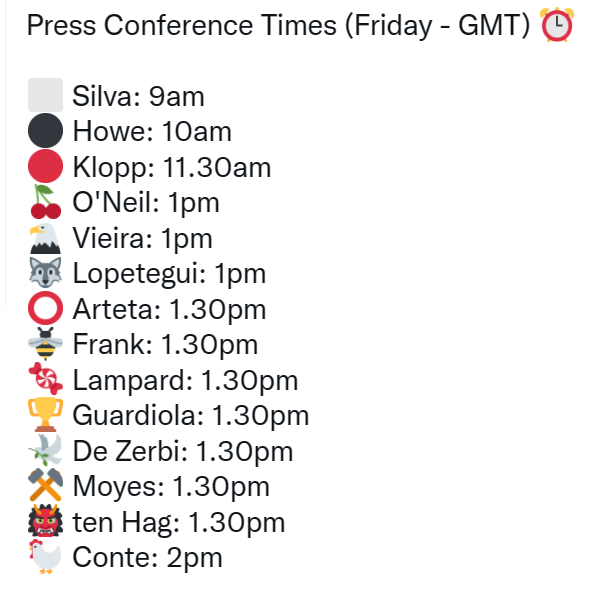 We’ve got all the big Fantasy Premier League (FPL) injury news from Friday’s pre-match press conferences in this ‘live’ article – including the latest on Darwin Nunez (£8.9m).

A total of 14 Premier League managers will face the media today but there could also be embargoed quotes released from Graham Potter’s post-Fulham presser, which was held on Thursday evening.

Five managers faced the media on Thursday, with the notable information here.

Matt Targett (heel), Jonjo Shelvey (calf) and Emil Krafth (knee) are the only players on the Newcastle injury list ahead of the visit of Fulham, with Alexander Isak making his comeback from injury in the two domestic cup matches over the last week.

Given his length of absence, however, it looks like we’ll only be seeing him appear as a substitute in the short term.

“He’s responded very well physically – there’ve been no ill effects. He’s trained well this week off the back of that cameo (against Leicester on Tuesday). I think we have to be very careful with him, just with the length of time he’d been out and the type of injury that he had.

“He’s done all the work, he’s looked in good condition, he’s looked confident and he’s very keen to be involved. But I think we need him for the long term, and it’s great to have a very strong choice in the centre-forward unit at the moment.” – Eddie Howe on Alexander Isak

Aleksandar Mitrovic is free to face his old club after serving a one-game ban for yellow card accumulation in midweek but Fulham have lost another player to suspension, with Antonee Robinson unavailable in Gameweek 20 for the same reason.