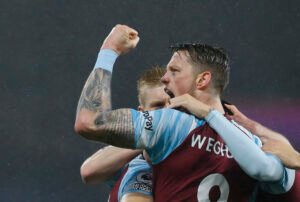 Halloween may be over nine months away but, if you want to truly frighten a Fantasy Premier League (FPL) manager, two words should easily do the job. Wout Weghorst.

You see, the question isn’t so much ‘who is Weghorst?’ but more ‘why does Weghorst want to keep causing pain?’

His half-season at Burnley ended in relegation, two goals and multiple Double Gameweek failures, although the subsequent loan to Besiktas has been productive enough to persuade Manchester United into a loan move until the end of the season.

So can the 30-year-old forward provide adequate cover and is there a realistic chance of FPL redemption?

Upon last year’s £12m transfer to Burnley, we provided a Scout Report on Weghorst’s career so far.

A spell at Heracles led to AZ Alkmaar, who he joined in the summer of 2016 before proceeding to score 35 times over two seasons.

This tempted Bundesliga side Wolfsburg to sign the 6ft 6in giant and enhance his reputation further thanks to 59 goals and 19 assists over the next three-and-a-half campaigns.

His rate began to slightly tail off as 2021/22 progressed and Wolfsburg were hovering just above the drop zone. To mix things up, in came Jonas Wind and Max Kruse, enabling Weghorst to move to the Premier League.

Leaving one relegation battle for another, the Dutchman’s new club suddenly had a lot of Double Gameweeks on the horizon. Indeed, two were in succession.

One goal and 14 points arrived during Double Gameweek 26, meaning over 971,000 managers bought Weghorst and 676,000 captained him for Gameweek 27’s matches against Crystal Palace and Leicester City.

He blanked in both, bringing in a measly three points. It was part of an eight-match goalless run, although the upcoming Double Gameweek 31 ensured ownership barely dropped – in fact, he was the most-bought player heading into the double. Yet still nothing, just three points.

At this point, the FPL community ditched the now infamous Weghorst en masse. He naturally then scored in Double Gameweek 33, before ending the campaign as a Burnley substitute.

Still owned by the Clarets, Weghorst has had a good time in Turkey and came off the bench to score two dramatic goals against Argentina in their World Cup quarter-final.

Similar to the likes of Peter Crouch and Andy Carroll before him, Weghorst is initially judged on his height. Whilst it’s not entirely unfair to assume he succeeds because of aerial dominance, modern-day forwards can’t rely on that alone. Weghorst has other qualities.

“There’s little doubt that Weghorst is a traditional target man who can happily play with his back to goal if called upon, but he can also play as a very effective number nine too. His sheer physicality should help a lot in the Premier League. He’s also got an excellent eye for goal and is rarely wasteful in front of goal.

“It wasn’t so long ago that he was being linked with a move to Tottenham as a potential replacement to Harry Kane. And while I’m not sure he’s as good as the England striker, they are similar types of players. Or at least Weghorst is like the younger Kane, when he was still a number nine.” – Stefan Bienkowski, speaking to Lancashire Live in January 2022

“People see his height and presume he’s someone who flicks it on, wins the ball in the air and who you throw balls into the box for, but he’s better than that.

“He presses the ball really well – which is what everyone in the Bundesliga needs to do – and it feels like an excellent fit.” – Bundesliga journalist Matt Pearson, speaking to the i newspaper

His two Burnley goals were a lot less than the expected goals (xG) tally of 5.15. From his Gameweek 23 debut up until Gameweek 38, only three players underachieved by more.

At first glance, adding such a tall forward will please owners of Luke Shaw (£5.1m) and Christian Eriksen (£6.3m) but Man Utd are the league’s worst side for crossing the ball and having attempts from set plays.

WHERE WEGHORST FITS IN AT MAN UNITED

So, although clearly not ten Hag’s preferred style, Weghorst now gives him a Plan B against more stubborn defences.

“I think in the balance of the offensive [players], he really fits in. I am really happy and I don’t think we had the type what he is. Most importantly, he can score goals from everywhere and he was always a surprise at every club, in every league.

“That is also what I expect here. For here, I expect a team player and someone who can link up, a player who will do his defending work and we are really happy to sign him.” – Erik ten Hag speaking to the Man Utd website

Such good hold-up play will also be good news for Marcus Rashford (£7.1m), although his FPL ownership is currently so high that only captaincy will provide a significant rank boost.

Weghorst will begin this loan spell as a backup to Anthony Martial (£6.6m) but the Frenchman is notoriously injury-prone and was even forced off at half-time during Saturday’s Manchester derby.

It’s an immediate reminder that Weghorst might see quite a lot of pitch time, especially as Man Utd are the only English side still in four competitions.

IS WEGHORST WORTH BUYING IN FPL?

Using the fixture planner of Legomane, which goes beyond the Premier League, we can see just how congested their schedule looks.

Carabao Cup semi-finals, FA Cup clashes and a two-legged Europa League tie with Barcelona are all imminent. Squad management will therefore be a factor, potentially ruling out Weghorst as an FPL option unless a significant injury crisis crops up.

All it would take, however, is a spell on the sidelines for Martial, at which point Weghorst may become a valid option for our frontlines.

Those at FPL headquarters have handed him a £6.0m price tag.