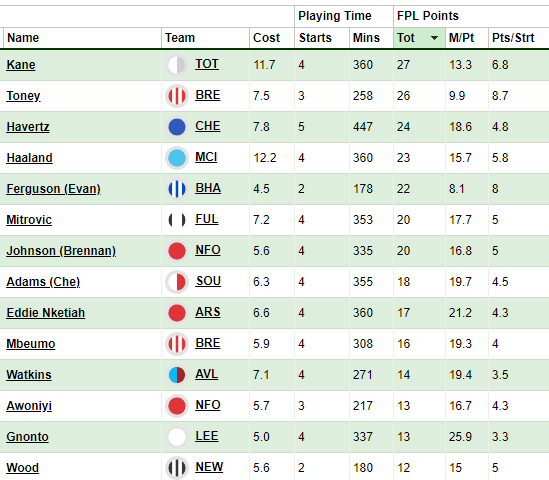 Four more Premier League fixtures from Saturday get the Scout Notes treatment as we continue to dissect the Fantasy Premier League (FPL) talking points from Gameweek 20.

The numbers and graphics you see in this article are taken from our Premium Members Area, where you can access Opta player and team data for every single Premier League fixture this season.

Ivan Toney‘s (£7.5m) FA charge would have deterred many FPL managers from picking the Brentford striker in their Gameweek 17 unlimited transfers squad, knowing that a possible ban was just around the corner. Like Diego Costa six years ago, Toney keeps on scoring and the ban just ain’t coming – yet.

He was also flagged with an injury until hours before Friday’s deadline but having been passed fit to start by Thomas Frank in his pre-match press conference, Toney used all of his cunning against Bournemouth to win a first-half penalty that he inevitably converted.

Above: Ivan Toney trails only Harry Kane for FPL points among forwards since the restart

It wasn’t a swashbuckling display against arguably the worst team in the division, with Toney’s contentious penalty the Bees’ one and only ‘big chance’. Sky Sports ran a stat during their live coverage of the game in which they revealed that Frank’s troops were previously winless in 2022/23 when having more than a 50% share of possession in matches, and there’s certainly an argument to say that they’re at their most dangerous when giant-slaying (see wins over Liverpool, City, United and so very nearly Spurs).

Nevertheless, it’s a porous Leeds up next, a team who tend not to sit back like Bournemouth did and a side that Toney indeed scored a hat-trick against earlier in this season. Who knows what happens to Toney in February once his case has been heard – he had until January 4 to respond to the latest charges – but as a one-week punt, there are few better in Gameweek 21.

While Toney might end up being a very short-term hold/buy (the ship will have sailed for many), the Brentford backline and David Raya (£4.6m) in particular are making good longer-term cases.

Only two sides have conceded fewer ‘big chances’ than Brentford over the last seven games, but the Bees are still allowing Raya to make plenty of other bonus-boosting saves in the process.

A blank in Gameweek 25 could well be on the cards but there are some decent fixtures beyond it:

As for Bournemouth, they’re winless and goalless since the restart.

Near the bottom of our Season Ticker for fixture difficulty over the coming seven Gameweeks, they might also be without star striker Dominic Solanke (£5.6m) for the foreseeable future.

“Unfortunate. There was no-one really around him and it was just a strange incident in training.

“He felt some pain in his knee. We don’t exactly what it is, but we are hopeful it’s not going to be too long.

“I tend not to listen to rumours [about a long-term absence], I’ll wait for the doc to tell me.” – Gary O’Neil on Dominic Solanke’s injury

We all know how good James Ward-Prowse (£6.2m) is from dead-ball situations, with his spectacular effort against Everton on Saturday taking him to within two free-kick goals of David Beckham’s Premier League record.

What’s often held the penalty-taking talisman back from serious FPL consideration is his ‘number six’ role and complete lack of threat from open play but there is a sign that things are changing on that front.

As reported in our EFL Cup Scout Notes, Ward-Prowse was deployed as a ‘number 10’ in the thrilling win over Manchester City in midweek. That positioning evolved from a slightly more advanced ‘number eight’ role against Nottingham Forest in Gameweek 19, with the fit-again Romeo Lavia (£4.5m) holding the fort.

And again, at Goodison Park on Saturday, Ward-Prowse was stationed just behind Che Adams (£6.3m) in the Southampton attack. As well as scoring a trademark free-kick, Ward-Prowse popped up to net from open play and went close with another rare strike from inside the area.

“We played him a little bit higher so he can be more aggressive as his distances are through the roof week in, week out, so we know we can get a lot out of him. Everything he does is excellent.” – Nathan Jones on James Ward-Prowse

In fact, he was the most advanced Saints player in terms of average position (below right), while his total of six penalty area touches (below left) was just two short of what he had racked up in Gameweeks 1-19 overall.

Southampton boss Nathan Jones has very quickly become known/notorious for his week-to-week tactical changes, it should be said, so we can’t yet assume that Ward-Prowse is going to remain as a second striker for the rest of 2022/23.

The sheer number of midfielders on our Watchlist is also a good indication of how hard it’ll be for him to worm his way into FPL managers’ plans but the upcoming fixtures are pretty decent, for anyone looking to break the template:

Above: Ward-Prowse is 10th among midfielders for non-penalty expected goal involvement (NPxGI) over the last four Gameweeks.

Adams supplied the assists for both of Ward-Prowse’s efforts, with Demarai Gray (£5.3m) claiming his third attacking return in as many matches by setting up Amadou Onana (£4.8m) for the sub-par Toffees’ opener. In reality, El Drossico was a Fantasy footnote in Gameweek 20, and there’s not really anyone bar Ward-Prowse worth considering in the foreseeable future.

Another game, another double-barrelled differential midfielder to discuss.

Brennan Johnson (£5.6m) stole the headlines with a brace against Leicester City but again pulling the strings was Morgan Gibbs-White (£5.5m), who chipped in with a couple of assists to make it five attacking returns in as many matches.

Despite playing one fewer game than many others, Gibbs-White is top-five material among FPL midfielders for both chances created and goal attempts in the last six Gameweeks.

It’s worth pointing out that seven of his shots came in Gameweek 15 (see below), when he was deployed as the central figure in Steve Cooper’s front three:

A much-improved Forest defence have actually conceded fewer shots on target than any other club over the last six Gameweeks, while there’s a possibility that we may have a playing £3.9m goalkeeper on our hands in the coming weeks.

Dean Henderson (£4.7m) managed to finish the game against Leicester but was clearly struggling in the closing stages, with Cooper confirming after full-time that the Manchester United loanee was injured.

“My first impression is that it is not good. But scans will tell us more and give us more clarity, over the next day or two. We will have to see how that goes. It is a muscle injury. We believe in his thigh. But we will find out more in the coming days.” – Steve Cooper on Dean Henderson’s injury

Wayne Hennessey (£3.9m) could be set for a run of starts between the posts depending on the severity of Henderson’s problem, although who would put it past Forest to go out and recruit again.

Speaking of injuries, a Leicester side missing eight players made it four losses on the bounce; we’re back to Gameweek 1-8 form with the Foxes. Harvey Barnes (£6.8m) spurned two big chances with the game delicately poised, and he’s ranked joint-third among midfielders for those gilt-edged opportunities in 2022/23. Like the rest of his team, however, we’re currently seeing early-season Barnes rather than the in-form Gameweek 9-16 winger who scored five goals.

In yet another all-bottom-half clash, Wolverhampton Wanderers edged West Ham United in the battle of two of the lowest scorers in the division.

True to form, there wasn’t a single Opta-defined big chance created all afternoon.

Only Bournemouth (two) have created fewer such opportunities than Wolves and West Ham (three) since the restart, so there’s little to champion in attack presently.

Daniel Podence (£5.3m) does have three goals in four appearances under Julen Lopetegui, although he’s scored with 50% of his attempts in that time and that shot-to-goal conversion rate isn’t going to continue over a more sustained period.

Wolves’ clean sheet was good news for owners of Hugo Bueno (£3.9m), who has not only started all four Premier League games under Lopetegui but has also strung together nine successive top-flight appearances. It was another assured display from Bueno and, in further encouragement, attack-minded positional rival Rayan Ait-Nouri (£4.2m) was substituted on for a different Wolves player further up the pitch for the second game running. Bueno’s more defensive skillset seems to have won over Lopetegui, so long as he continues in a back four.