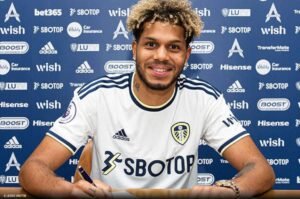 Scoring goals hasn’t been a particular problem for Leeds United so far, with the issue being at the back where only three teams have conceded more than their 33.

Yet the club-record £36m capture of Georginio Rutter (£5.5m) suggests that Jesse Marsch wants to stop relying on Rodrigo (£6.4m) for goals and has therefore added another exciting young talent to the attacking ranks.

Arriving on a five-and-a-half-year deal, Rutter follows Max Wober (£4.5m) through the door as a January arrival.

So can the 20-year-old help pull Leeds away from relegation and what impact will he have in FPL?

Born in the north-western town of Plescop, Rutter’s potential was quickly spotted by the region’s leading side Rennes.

It led to progression inside one of Europe’s elite academies, with Ousmane Dembele and Eduardo Camavinga amongst their many graduates of recent times.

Rutter made his Ligue 1 debut in September 2020 but neither started nor scored in a Ligue 1 match, though a Champions League goal did arrive against Sevilla. Hoffenheim noticed his expiring contract and convinced him that the Bundesliga was the perfect place to bloom.

A late January 2021 transfer was agreed upon for just £500k and it didn’t take long for Rutter to introduce himself. Brought on for an 87th-minute debut against Werder Bremen, he scored three minutes later.

Although his two years in Germany have thrust him into first-team football, France under-21 caps and a Golden Boy nomination, it’s still a remarkably high fee for a forward without many goals.

Eight arrived last season, albeit with only 13 of 33 appearances as a starter, and just two have arrived so far in 2022/23. From Hoffenheim’s perspective, they’ll gladly let a Premier League club pay big money and ensure a massive profit – similar to what they did with Roberto Firmino (£8.0m) and Joelinton (£5.9m).

According to WhoScored, Rutter is a strong dribbler that suits counter-attacking play but also knows how to press opposition defences, which fits in with Marsch’s philosophy.

It suggests another wide attacker but the Frenchman is almost always used as the lead centre forward. 20 of this season’s 27 shots have been from inside the box and Rutter himself believes he is mostly central, as he told Scouted Football.

“I can play with my back to goal when needed (to help the team push up), but I also like to drift out wide and attack spaces as a winger. I’m a mix of all that. But I would say that things can change depending on the team you play for and what is happening during the game. I can also add that I’m a generous player – I run a lot.“

Another great asset alongside versatility is his dual-footedness. He labels himself a left-footer but is strong with both, seeing five of his 11 league goals coming from the right boot and only three from the left.

“Part centre-forward, part jet-heeled winger, there is something very Gnabry-esque about watching Rutter play. He is among the 50 quickest players in the Bundesliga with a top speed of 34.54 km/h (21.46 mph), so his pace, direct running and mesmerising dribbling make him a handful for any defender.”

“Add into the mix that he is equally comfortable out wide as he is through the middle and it becomes clear just why Rutter is so highly regarded.“

WHERE RUTTER FITS IN AT LEEDS

Rutter may just be the clinical finisher they need. Amongst all 20 Premier League sides, our Members Area data shows that Leeds are one of the worst for shot accuracy – the percentage of goal attempts that are on target.

FBRef states that 14 of Rutter’s 27 shots have been on target and this 51.9 per cent is better than his new team-mates.

It’s hard to say how soon he will break into the starting line-up, though. In the absence of injured Luis Sinisterra (£6.5m) and Patrick Bamford (£7.2m), youngsters like Crysencio Summerville (£4.2m) and Wilfried Gnonto (£5.0m) have excelled when handed a chance.

Meanwhile, Rodrigo is the only FPL midfielder to have reached 10 goals, making it hard to justify moving him away from centre forward.

IS RUTTER WORTH BUYING IN FPL?

Our Season Ticker shows that Leeds have an appealing run that ranks second of all sides without a Double Gameweek.

However, assuming Rutter begins with bench appearances, his starts may end up coinciding with tougher outings.

The FPL game has handed him a £5.5m starting price, offering a downgrade option if managers lose faith in Aleksandar Mitrovic (£7.2m) or Darwin Nunez (£8.8m), whilst Ivan Toney (£7.5m) still has FA charges hovering above his head.

All things considered, it’s hard to see Rutter becoming a serious FPL option during this season but stranger things have happened.