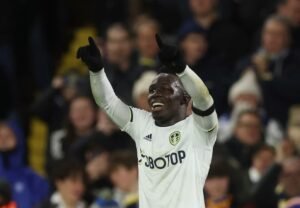 Gameweek 21 of Fantasy Premier League (FPL) is almost upon us, which gives us an opportunity to have a look at some more differential options.

This time, we’ve selected low-owned picks at Leeds United, Brighton and Hove Albion and Southampton, who we think have the potential to make an impact.

The 19-year-old was on fire against Cardiff in the FA Cup on Wednesday, scoring an impressive brace, having netted his first goal for the Yorkshire club in Gameweek 19. He was also electric in the recent 2-1 defeat at Aston Villa, with only a faint touch denying him an assist.

Capable of playing as a winger, second striker or centre-forward, Gnonto has registered nine shots and created four chances in four league matches since the Premier League restarted. Those stats are made even more impressive when we consider that two of those were against Man City and Newcastle. He is also an excellent dribbler and draws lots of fouls, frequently winning free-kicks for his team in the final third.

With Gnonto impressing, Rodrigo (£6.4m) scoring regularly, Patrick Bamford (£7.2m) back fit and Georginio Rutter (£5.5m) joining for a club-record fee, there is plenty of firepower in Leeds’ ranks.

There are some decent fixtures on the horizon too, which includes a potential Double Gameweek 22 against Nottingham Forest and Man Utd.

Gnonto is already one of Leeds’ most important players and at just £5.0m, could be an excellent third forward in FPL.

Free-scoring Solly March (£5.1m) is still only owned by 4.0% of FPL managers, despite racking up more points (44) than any other player in any position since the season resumed.

Under Graham Potter, March spent most of his time playing wing-back but was regularly shifted around. However, Roberto De Zerbi has chosen to push him further forward on the right of his 4-2-3-1 formation, a position he is thriving in. The Italian’s man-management also seems to be getting the best out of March, which he recently discussed:

“I love playing for Roberto – he’s great. He puts his arm around you and tells you you’re a good player. Maybe that’s what I needed.” – Solly March

From Gameweek 17 onwards, March has taken 10 shots and created nine chances. As a result, no Brighton player can trump his 2.32 xGI tally, including Kaoru Mitoma (£5.0m) and Evan Ferguson (£4.5m).

Brighton head into Gameweek 21 on a high after beating Liverpool 3-0 last weekend. Next up for the Seagulls is a trip to Leicester – who have lost all four games since the restart – with appealing fixtures against Bournemouth, Crystal Palace and Fulham to follow. It’s worth noting that Gameweek 25 could potentially be a blank, although that is dependent on the results of the EFL Cup semi-finals, which you can read more about here.

As for March, he is one of the cheapest midfielders in FPL but can easily be a week-in, week-out starter, allowing you to push more funds into other areas of your team.

With four goals in as many matches since the Premier League restarted, interest in James Ward-Prowse (£6.2m) is picking up.

The 28-year-old started the season slowly, with just two attacking returns inside the first 15 Gameweeks. However, he has since played a part in all five of their goals under new manager Nathan Jones, which has coincided with him being deployed further forward, specifically as a number 10 of late.

“We played him a little bit higher so he can be more aggressive as his distances are through the roof week in, week out, so we know we can get a lot out of him. Everything he does is excellent.” – Nathan Jones on James Ward-Prowse

From Gameweek 17 onwards, he is averaging 7.3 points per match, having registered 10 shots and three big chances, whilst also creating nine chances for his teammates. Such is his importance, Ward-Prowse has played every minute of league football for Southampton this season. He is also on set pieces, including penalties.

Now, the Saints meet Aston Villa in Gameweek 21. The Villans are improving under Unai Emery but have allowed 14 big chances in the last four Gameweeks, more than any other top-flight side bar Leeds.

Ward-Prowse has delivered a string of impressive displays under his new manager and is an intriguing mid-price differential.