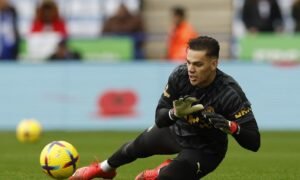 Another Fantasy Premier League (FPL) deadline is almost upon us, so we’ve once again chosen who we think are the best players for the upcoming Gameweek.

Ederson (£5.4m) may have underwhelmed in Double Gameweek 20, receiving just two points, but is a secure route into Man City’s backline for Sunday’s home meeting with Wolves. The visitors have shown improvement under Julen Lopetegui, but across the season, have only netted more than once away from home on one occasion. Furthermore, Ederson kept a clean sheet and collected six points in the reverse fixture at Molineux in Gameweek 8.

Newcastle are having an excellent season so far, with Eddie Howe’s side currently on a 14-game unbeaten run in the Premier League. And it’s in defence where they have been most impressive: the Magpies have conceded fewer goals (11) and kept more clean sheets (11) than any other top-flight side. Now, they visit Selhurst Park on the back of five consecutive shut-outs. Crystal Palace have scored just three goals in their five matches since the World Cup and have the league’s worst xGC tally from set plays this season, suggesting Kieran Trippier (£6.0m) can contribute points at both ends of the pitch.

Serge Aurier (£4.5m) has secured bonus points in four of his last five matches, a period that has seen an improving Nottingham Forest outfit keep three clean sheets. Next up is goal-shy Bournemouth, who have failed to score a single Premier League goal since the season resumed and have slumped to six successive defeats in all competitions. Adding to their woes, they will also be without Dominic Solanke (£5.6m) in Gameweek 21.

Brighton successfully shut out Liverpool last weekend and are a very decent fifth for NPxGC since Roberto De Zerbi took charge. In addition, Pervis Estupinan (£4.5m) carries a bit of assist potential, given that his minutes-per-chance-created average (62) is bettered by only six first-team Premier League defenders in 2022/23. As for their opponents, Leicester, they have allowed more opportunities to be created from their right flank than any other team in the last four Gameweeks.

The community member who beats our team by the largest margin will win a £100 Amazon voucher and a place in our Moderators and Contributors League for the following season.

Our champion this week is Hwanging by a Fred who has gone for the following: Ederson; Trippier, Schar, Burn; De Bruyne, Ward-Prowse, March, Mitoma; Johnson, Haaland, Toney (c)

The Scout Picks are 10-9 up on the community this season.