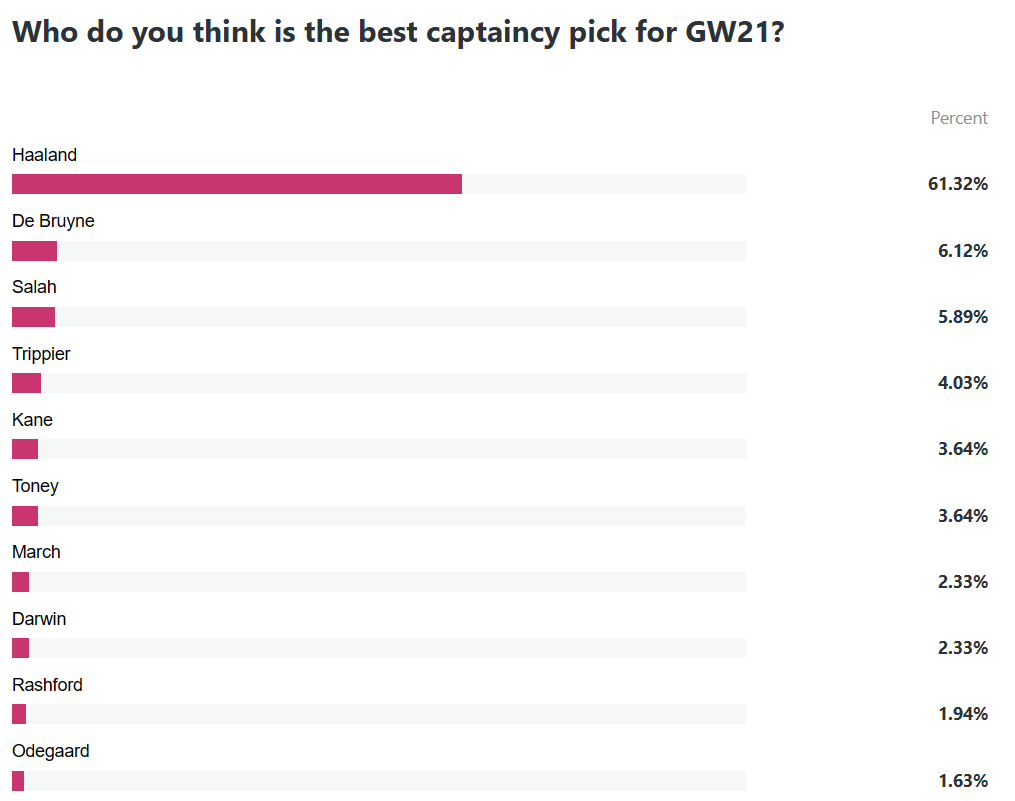 Erling Haaland (£12.2m) leads an assorted array of alternative candidates from Tottenham Hotspur, Liverpool, and even Brentford providing options for those managers tempted by a punt for the Gameweek 21 captaincy.

As usual, the Captain Sensible article is here to highlight which assets have the best chance of hauling.

First, we will assess the fallout of the captain poll, before then analysing the best options, Rate My Team (RMT) and the Premier Fantasy Tools ratings ahead of Saturday’s 11:00 BST deadline.

Erling Haaland dominates the captain poll for the second successive Gameweek, backed by over 60% of the total votes cast by users at the time of writing.

The Norwegian has over ten times as many votes as anyone else at this stage, with City team-mate Kevin De Bruyne (£12.5m) currently in second place, backed by just over 6% of our users.

Erling Haaland headed home his 22nd goal of the Premier League campaign but his solitary Double Gameweek 20 return underwhelmed, especially for those who selected the Norwegian as their Triple Captain.

The Norwegian places in the division’s top four over the last six matches for shots inside the box (17) and big chances received (nine), a downturn from his early-season dominance.

However, Haaland continues to dominate the expected metrics, leading the division for expected goals (xG) and expected goal involvement (xGI), with 4.74 and 5.29 respectively.

Kevin De Bruyne was a surprise omission from Manchester City’s starting line-up for Thursday’s 4-2 victory over Tottenham Hotspur, with the Belgian an unused substitute.

The playmaker’s absence from training photographs earlier in the week had been noted by eagle-eyed managers and De Bruyne had to settle for a watching brief as Manchester City came back from two goals down to demolish Spurs.

Prospects of a return to the starting line-up bode well for the Belgian given both his rest and the quick turnaround for Manchester City.

Julen Lopetegui has galvanised Wolverhampton Wanderers since taking the Molineux hot seat, recording crucial victories to lift his new troops from the foot of the Premier League table.