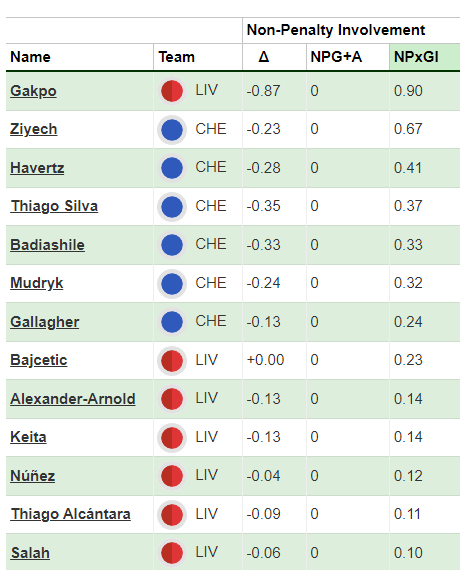 According to LiveFPL’s ownership statistics, the average Fantasy manager in the top 10,000 owns 0.6 Chelsea players and 0.3 Liverpool assets.

We’re a far cry from the days in which our FPL squads were packed full of picks from each side and there was little on show on Saturday lunchtime to further interest in anyone other than Kepa Arrizabalaga (£4.6m).

Kepa walked away with yet another haul after supplementing his clean sheet with save/bonus points, taking his points-per-match average to 5.2 – a number that is unbeaten by any other first-choice goalkeeper.

Liverpool seldom threatened Chelsea’s goal with any real quality. Mohamed Salah (£12.8m) was again quiet, having only one shot for the third match in a row, while not one of Cody Gakpo‘s (£8.0m) seven efforts caused much consternation.

The Reds’ shut-out – their first since October – arrived more by luck than judgement. Debutant Mykhailo Mudryk (£7.0m) had a couple of clear sighters, Benoit Badiashile (£5.0m) should have scored from a set piece, Thiago Silva (£5.4m) hit the post from close range and Kai Havertz’s (£7.8m) strike was chalked off for a marginal offside.

“Massive, massive. So, directly after the game you cannot forget the chances they had, where we defended in the last seconds with a block. But tomorrow I don’t remember them anymore, it’s just a clean sheet and it feels really good. So, how I said, there are things we have to build on, that’s what we will do.” – Jurgen Klopp on Liverpool’s clean sheet

Trent Alexander-Arnold‘s (£7.3m) annus horribilis continued: he didn’t even get to benefit from the clean sheet points, with a midweek injury reducing him to a substitute role. A belated return to training also meant that a fit-again Darwin Nunez (£8.8m) had to make do with a second-half cameo.

A FIRST SIGHT OF MUDRYK

Mudryk’s debut came early in the second half and he immediately looks like one for the FPL watchlist. Pacey and direct with his dribbling, his stats might show only one shot on goal but he was in the thick of things. That registered effort came from six yards after a waltz into the Liverpool area but he was also inches away from connecting with a cross from the right and then should have finished first time, rather than attempted to control the ball, with an almost identical delivery.

“That was really good. He’s only been with us a couple of days. He will only get better the more he is with us, and the more we understand each other, but promising signs. He will get supporters off their seats. His dribbling action is really high. He knows where the goal is.

“We had 45 minutes as his maximum, ideally around 35 minutes. We felt it as the right time to put him in, he is a fit boy and has trained a lot. He’s not played since November so it would have been a risk to play him from the start.

“I am happy for him to get his first minutes and start his career with us.” – Graham Potter

Kaoru Mitoma (£5.0m) v Solly March (£5.1m) would have been a coin-toss decision for a considerable number of FPL managers ahead of Saturday’s deadline.

The two players had polarising fortunes in Gameweek 21, with Mitoma walking away with a double-digit haul and March blanking.

Talk about fine margins (and ‘variance’), though. Mitoma’s excellent strike came from his only shot of the game, an effort that carried an expected goals (xG) value of just 0.02. March, meanwhile, missed the below chance after kicking the ball, Mitrovic-style, onto his standing foot. Mitoma would have claimed the assist for the below effort, it should be said, but at least the ‘big chance created’ helped him secure maximum bonus points.

The third member of Brighton’s cut-price, in-form trio, Evan Ferguson (£4.6m), lost his place in the starting XI but replaced positional rival Danny Welbeck (£6.5m) midway through the second half and grabbed a late equaliser. Game-time might always be more of a question mark than it is with Mitoma or March but this goal won’t have done his Gameweek 22 prospects any harm, while Ferguson remarkably now sits top of the FPL form table among forwards.

Pervis Estupinan (£4.5m) claimed assists for both of the Seagulls’ goals and now sits a fine seventh among FPL defenders for chances created this season.

It was another positive attacking display from Albion, who have scored two or more goals in seven of their last eight league matches. They’ll be without Alexis Mac Allister (£5.4m) in Gameweek 22, however, after he picked up his fifth booking of the season on Saturday.

The rate of ‘big chances’ falling to Harvey Barnes (£6.7m) was something we mentioned in last week’s Scout Notes after a defeat to Nottingham Forest and here he was again getting another gilt-edged opportunity against Brighton, this time converting.

Above: Harvey Barnes has had at least one big chance in nine of his last 11 appearances. Here is how he ranks compared to other FPL midfielders in that time.

“He’s always a threat, Harvey. Maybe his final pass wasn’t so good today but he was in there, he read the flick on well and it was nice to get a goal from a corner.” – Brendan Rodgers

Also noteworthy for FPL managers was the return to fitness of James Maddison (£8.0m), who made his first appearance since the World Cup as a second-half substitute. Leicester’s next four fixtures will be a deterrent to most of us but Maddison will soon be back in the Fantasy reckoning, with his average of 5.9 points per start in 2022/23 only beaten by two other midfielders – Mitoma and Martin Odegaard (£6.9m) – who we’d consider regular starters.