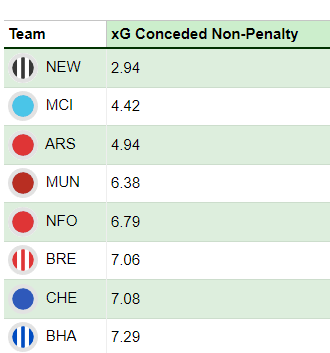 SIX IN SIX FOR NEWCASTLE DEFENCE

It’s now six shut-outs in a row for Eddie Howe’s troops after Saturday’s goalless draw at Selhurst Park, a period in which the Magpies have allowed their opponents just one solitary big chance (a penalty to Fulham in Gameweek 20).

Above: Newcastle’s NPxGC is considerably better than even Arsenal and Man City’s in the last six matches

If you still only own the absurdly consistent Kieran Trippier (£6.0m), however, the question would have to be asked if now is the right time to add to your ranks, as galling as it may be to see the double/triple-ups elsewhere. The next two fixtures are excellent, make no mistake, but they also happen to be (likely) Double Gameweeks for other clubs and those precious free transfers might be needed elsewhere. Three potent attacks then follow in Gameweeks 24-26, the middle fixture of which could also be a blank.

It looks rosier thereafter, with the Magpies one of a handful of sides already assured of a fixture in Blank Gameweek 28 and enjoying some decent matches around it.

The goals have stopped flowing at the other end of the pitch, with just one scored in the last four matches, although remember that Newcastle followed up their last mini-drought (Gameweeks 5-9) with nine goals in two fixtures.

Above: Newcastle have underachieved on the expected goals (xG) front more than any other side in their last four matches, suggesting chances are still arriving

We might just be witnessing a regression to a more sustainable mean for Miguel Almiron (£5.9m), although it’s worth pointing out that he’s currently on his longest run of 2022/23 without a ‘big chance’ (four matches).

“We did most things right today, I thought we played very well. We controlled the game, had chances. Maybe not absolutely must-score moments but a lot of chances that you’d like to think we’d do better with if we’d have them again. We had a lot of the ball around their box, a lot of good build-up play. We just couldn’t score the goal.

“Whenever you’re not scoring, it’s a concern. We’re not scoring the numbers that I’d want to. But I don’t think there’s any concern about our style of play in terms of how we’re approaching the game.

“Teams are giving us a lot of respect, they’re putting a lot of men behind the ball. For an away team coming here, to have the amount of possession and control that we did is unusual.” – Eddie Howe

Palace remain bottom of our Season Ticker until the March international break, so there’s little Fantasy interest in the mid-table Eagles.

They may be without their talisman for a while, too, after Wilfried Zaha (£7.3m) limped off with a hamstring injury on Saturday.

“There is no update. We will have to wait until Monday to really find out the nature of the injury.

“It looked like a hamstring injury, yeah.” – Patrick Vieira on Wilfried Zaha

We saw a cluster of January transfer window signings in action for their new clubs in Gameweek 21, including two at the Vitality Stadium.

Chris Wood (£5.6m) made his Nottingham Forest bow and was thrust straight into the starting XI at Bournemouth, who handed a first start to Dango Ouattara (£5.0m).

Wood was quiet but his job could be more facilitator than outright goal threat anyway, freeing up room for the players around him – on Saturday, that was Morgan Gibbs-White (£5.5m) and Brennan Johnson (£5.6m).

It wasn’t just the Gameweek 21 stats that suggested this but Forest boss Steve Cooper himself.

“In the future, he will get a lot more balls, a lot more service and probably a lot more space. But what you saw is he occupies more than one defender, which then means the space opens up for the likes of Morgan and Brennan. That’s really important we’ve got that in our game, because we need to have a variety of attacks.” – Steve Cooper on Chris Wood

Gibbs-White’s seven chances created took him to 21 in his last six matches, more than any other FPL midfielder. Forest’s travel sickness drags on, however, with only one win and three goals scored on the road this season.

Ouattara was very bright down the Bournemouth right flank, registering five shots of his own and teeing up Jaidon Anthony (£5.2m) for the hosts’ opener, the Cherries’ first goal since the restart. But whatever infinitesimally small interest we might have had in Bournemouth players further shrinks when we look at the upcoming fixture list:

Away from the south coast, Danny Ings (£6.4m) made a debut for West Ham United but only as a late substitute.

On the subject of the Hammers, a Jarrod Bowen (£8.0m) brace helped David Moyes see off Frank Lampard (in more ways than one, it appears) in the game dubbed ‘El Sackico’.

Bowen’s two goals doubled his disappointing tally for 2022/23. Both strikes were deemed ‘big chances’ by Opta and they were his first such opportunities since Gameweek 14, so there has to be a significant asterisk next to the 16-point haul due to the quality of the opposition.

Certainly, looking at West Ham’s upcoming fixtures (four top-six sides and/or as many as two blanks), there’s little to get excited about from an FPL perspective.

One to thing monitor for more favourable future fixture runs will be Moyes’s use of formation, as the wing-back system was back in operation here and featured bargain-bin defenders Vladimir Coufal (£4.1m) and Emerson Palmieri (£4.0m) down the flanks. Emerson was the more impressive of the two, recording two penalty box touches, one shot and two chances created, but so long as more orthodox full-back Aaron Cresswell (£4.8m) is around and Moyes retains some use of a 4-2-3-1/4-3-3, there’ll always be game-time uncertainty.

As for Everton, we now await the axe falling on Lampard. The Toffees had just five shots all game in east London and only Wolves have now scored fewer goals this season.

An ‘out of position’ Leon Bailey (£4.5m) again looked a threat in the final third, registering four shots in all, but his finishing was back to being wasteful after his confidence-boosting goal in Gameweek 20.

While Villa’s attack is still bottom-half material for expected goals (xG) under Emery, their defensive numbers are more eye-catching:

It’s not all been plain sailing (Leeds were the better side last week) but Villa have faced free-scoring outfits like Manchester United, Brighton and Hove Albion, Liverpool and Tottenham Hotspur in Emery’s first seven games, just to provide some context.

Alex Moreno (£4.5m) looked attacking on his full debut, registering two shots and as many chances created, while the other three members of Villa’s back four all cost under £4.5m, including an impressive Tyrone Mings (£4.3m).

One of the few sides unaffected by Blank Gameweeks 25, 28 and 32, Villa rise to first in our Season Ticker once matches against the top two are out of the way:

Goalscoring remains a bit of a problem for Southampton, with just four goals arriving in their first five post-restart fixtures. To say they’re overly reliant on James Ward-Prowse (£6.2m) might be an understatement, as he’s scored all four. Even here, it was the set-piece-taking talisman – again deployed in an advanced number 10 role – who thought he had broken the deadlock, only for his deflected effort to be ruled out for a foul by VAR.