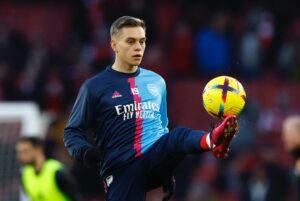 After missing out on a deal for Mykhailo Mudryk (£7.0m), Arsenal reacted swiftly by signing Leandro Trossard (£6.7m) from Brighton and Hove Albion last week, in a deal believed to be worth £27m.

The Belgian went straight into the squad for Sunday’s last-gasp win over Manchester United, appearing from the bench to replace Gabriel Martinelli (£6.7m) on 81 minutes.

In this Moving Target report, we assess the transfer from a Fantasy Premier League (FPL) perspective – and in particular, look at how Martinelli and Bukayo Saka (£8.2m) could be affected.

In June 2019, Trossard signed for Brighton from Genk for a reported £18m and was a vital part of the team during his time with the Seagulls.

The Belgian has 25 goals and 18 assists in 116 league appearances for Albion since making his debut. Fairly modest numbers, yet there has been a step up in output in 2022/23.

Trossard has scored seven goals from his 16 Premier League starts this season, including a hat-trick against Liverpool at Anfield in October.

“We are really happy to have him. He’s a player we have followed for a while now. The opportunity came – we had the necessity to have a player in the frontline who is versatile enough to play in different positions. He knows the league, he has enough experience here and I think he can have an immediate impact in the team. We have to think short-term, but medium and long-term as well. He gives us all of that. He’s a very intelligent player. When you look at his career and what he’s done in the last few years, he’s a player that fits our way of playing.

In the summer we were looking for a player in that position and we weren’t able to do it, so it’s something that the squad needed. With the injuries to Gabi [Jesus] and Reiss [Nelson] we’re really short in the frontline. We needed some reinforcements and in Leo, we’ve found a player who fits everything that we want. I think specificity is really necessary to our way of playing. It’s true that we need a few players who can fulfil certain positions and Leo is one of them. The skill and composure he has in the final third and the technical ability to associate and link with people, it’s impressive. That’s what we need from our forward players.” – Mikel Arteta

“They told me they really like me as a player, that I would really suit the system and how they want to play. It helps me that I’m versatile and that I can play in different positions. They’re looking forward to working with me and vice versa. I’m really excited to work with them and I think Mikel is a top coach.

I like to be in the pocket behind the striker. On the wings, I can explore myself as well. I’m comfortable in either of those positions but if I were to choose, behind the striker – but it all depends on the system. I think I’m good in 1v1s. I’m composed in the box, so if I get chances, I can finish them off. I can hopefully help the team to win tough games – I’m great in tight spaces. I’m quite experienced as well, so I hope I can bring that to the team as well.” – Leandro Trossard

Trossard has been used in a variety of roles by Brighton this season.

He began 2022/23, under Graham Potter, as an inverted left wing-back in Brighton’s 3-4-2-1 formation. Then, in Roberto De Zerbi’s first game in charge, he played off Danny Welbeck (£6.5m) as a second striker. At times, he has also been Albion’s first-choice number nine in a 4-2-3-1, highlighting his positional versatility.

However, he has mainly appeared as an inverted left winger throughout his career, which is where he was deployed during Sunday’s 3-2 win over Man Utd when he replaced Martinelli for the final 10 minutes.

Looking ahead, earlier substitutions/minute management for Martinelli will likely become a more common occurrence, then.

However, those dangers need to be placed in context, given that Trossard is unlikely to break into the Arsenal starting XI ahead of the Brazilian any time soon unless he is desperately out of form.

Martinelli’s role may have changed a little with Eddie Nketiah (£6.6m) leading the line, rather than Gabriel Jesus (£7.9m) with whom he regularly interchanged positions, but his underlying numbers have largely remained good since the restart, despite his lack of returns over the last three Gameweeks.

He is perhaps less of an immediate threat to Saka, although it’s worth noting that nine of Trossard’s 25 Premier League goals have been scored with his left foot, so he could potentially step in on the right.

Saying that, it does feel like Trossard has been brought in as much-needed cover for both Martinelli and Saka, which makes sense, given that both players have played 1600+ Premier League minutes already this season.

Recent injuries to Jesus and Reiss Nelson (£4.7m), plus Emile Smith Rowe’s (£5.6m) ongoing fitness issues, have reduced options in attack, and adding the Belgian allows Arteta a chance to rest/rotate when necessary.

As for Trossard himself, he won’t be a consideration for FPL managers unless Martinelli or Saka suffer unfortunate injuries, given Arsenal’s attacking form and the standing in which both players are held by Arteta.

Can Trossard hit the ground running when handed an opportunity? Arsenal next play Man City away in the FA Cup fourth round on Friday, which is when we should next see him in action, perhaps from the start.