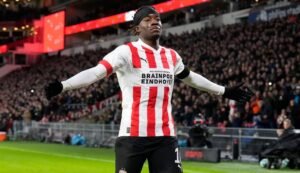 Not content with their collection of wingers and inside forwards, Chelsea have decided to splash out on Mykhailo Mudryk (£7.0m), Noni Madueke (£5.5m), David Datro Fofana (£5.0m) and the loan signing of Joao Felix (£7.5m) – with another week still left in this January transfer window.

Arriving from PSV Eindhoven, Madueke is another young English talent who chose to move abroad at a pivotal age and put faith in one of Europe’s elite academies.

A fee of around £30m has been paid to the Dutch side and Madueke has penned a seven-and-a-half-year contract.

So can the 20-year-old get enough game-time to boost Chelsea’s dwindling season and what impact will he have in FPL?

Chukwunonso Tristan Madueke was Barnet-born of Nigerian descent in March 2002. The 5 ft 9 in wonderkid spent time at the academies of Crystal Palace and Tottenham Hotspur, before signing for PSV in 2018 to get a quicker pathway to senior football.

“Moving abroad when you are young, it takes a bit of heart. Other than that, it is no different. I have definitely seen another side of life and had to adapt. There was a culture shift. But I am someone who is easy-going and can live anywhere so it was not so difficult.” – Noni Madueke to Sky Sports last April

2020/21 was Madueke’s reakthrough campaign, starting with four goals and three assists from the first seven league games. It ended with seven goals in just 956 minutes – a good rate – although some minor knocks limited Madueke to mostly substitute appearances for the remaining matches.

The subsequent season-and-a-half has also been hampered by muscle and ankle injuries, which could be of concern. He’s barely featured so far in 2022/23 and the Athletic report that he’s “missed 43 matches for PSV across all competitions over the last two campaigns”.

Nevertheless, he has no regrets about following Jadon Sancho (£7.1m), Jude Bellingham and Marcus Edwards abroad as an unknown English talent.

“I have been in a first-team environment since I was 17. I don’t think there is any way I would have experienced first-team football at that age in England. That is the main thing. From the moment I came here, I liked the aura straight away. It just felt like the right next step.” Madueke

And he’s seemingly committed to representing England at international level, rising through the under-16, under-17 and under-18 ranks to collect four under-21 caps so far.

According to WhoScored, Madueke is a left-footed right-winger whose style is more of an Antony (£7.3m) than a Hakim Ziyech (£5.5m).

He is skillful, fast and direct when dribbling near opposing full-backs. Working with Ruud van Nistelrooy helped improve his finishing, with Roger Schmidt fine-tuning his out-of-possession pressing work, to create a more polished player.

“I am a bit of a showman. I try to beat players. I am fast. I have an eye for goal. That is how I would describe myself. My biggest strengths are still my speed and my dribbling but I would say that my end product is good as well now.” – Madueke

WHERE MADUEKE FITS IN AT CHELSEA

Although Chelsea are known for loaning out their talents to a network of clubs, Madueke is likely to stay and compete with the aforementioned new wide players while Ziyech is thought to covet a move away and both Raheem Sterling (£9.7m) and Christian Pulisic (£5.7m) are injured.

Head coach Graham Potter is a fan of Madueke and suggests than an adjustment period is preferred to sending him elsewhere.

“He’s an exciting player, brings a left-footed attacking option for us and competition in that area of the pitch. He’s a young player who has had a good start in his career, accumulated games for a big club in Holland.

“He’s ready to take the next step and we need to help him adjust to life with us and to life in the Premier League, but again he is a player our supporters will like.” – Graham Potter

In fact, Chelsea could do with as much attacking help as possible right now. They are stuck in tenth place and have scored the fewest goals of all teams since Gameweek 12.

Using our Members Area stats, it can be seen that no side has a worse goal conversion rate than their 5.8 per cent.

IS MADUEKE WORTH BUYING IN FPL?

Potter needs new names to resurrect the Blues’ season and Madueke could be thrown in early due to such injuries. If he impresses enough to nail down a place, and it’s a big ‘if’ knowing Potter’s attitude towards rotation, the £5.5m price tag could tempt many into purchasing – especially those wanting to ditch Miguel Almiron (£5.8m) in the near future.

Our Season Ticker shows that Chelsea have the fourth-best set of fixtures over the next eight Gameweeks and the leading run of those without an imminent Double Gameweek.

Not only are they guaranteed to play in Gameweek 25 – when four teams won’t due to the Carabao Cup final – Potter and co are also nailed-on for big Blank Gameweek 28, as both they and Everton are already out of the FA Cup.

The transfer window closes before the next FPL deadline. If Chelsea decide to sell Ziyech and loan out Fofana, there could be a clear path for Madueke to make an immediate impact given the injuries elsewhere.

But eyes will probably be more likely on Mudryk for these good fixtures, and game-time certainly looks more assured for the Ukrainian for now.