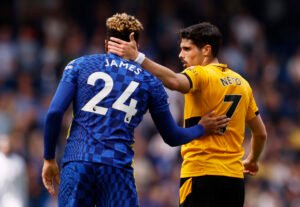 In these articles, we assess the Fantasy Premier League (FPL) players who had a quieter 2021/22, be it through injury, loss of form or otherwise, who we think have the potential to make an impact in the coming season.

Here, we take a look at Wolverhampton Wanderers’ Pedro Neto.

Neto made his return from a serious knee injury in February and spent the rest of the season building up his fitness and trying to get match-sharp.

However, it was far from straightforward, as the 22-year-old picked up a foot injury in March which ruled him out of the games against Everton and Leeds United.

As a result, Neto only made 13 Premier League appearances for a total of 501 minutes in 2021/22, but did start to look a lot sharper towards the end of the season, registering an assist against Manchester City and scoring his one and only goal of the campaign at Anfield on the final day.

His underlying numbers in that time were largely good when compared to team-mates, despite Wolves struggling on the whole (more on that later).

* only includes players who featured for a minimum of 500 minutes

During the run-in, it’s worth noting that Neto took up a central role in Bruno Lage’s 3-5-2 formation, although this system is generally rolled out against tougher opposition, and you’d expect him to revert to a wider position at the beginning of 2022/23 given the opening fixtures.

For a better indication of Neto’s FPL potential, we should probably look at the 2020/21 season, when he was largely injury-free and made 31 Premier League appearances under Nuno Espirito Santo.

One of his team’s standout performers, Neto topped both the goal-scoring and assist charts at Wolves, registering 13 attacking returns.

The season saw the Portuguese accumulate 61 shots, although it was his playmaking abilities that really caught the eye, as he produced eight assists and ranked joint-eighth amongst all midfielders for chances created:

Whether fielded out wide, as a number 10 or deeper (see below), Neto found a way to impact games, and in a short space of time went from a rotation option to being one of Nuno’s key men.

With a full pre-season behind him, hopes are high that Neto can hit the ground running in 2022/23.

And given the opening schedule, which sees Wolves sit top of our Season Ticker over the first six Gameweeks, he certainly has the fixtures to start strongly.

At this stage, it’s worth noting that Lage’s side really struggled for goals throughout 2021/22 and finished the campaign among the division’s lowest scorers. In fact, only the three relegated clubs scored fewer than Wolves’ 38, while they are also coming off the back of an awful end to the season, taking just 11 points from their final 14 games.

To address those issues, they will no doubt dip into the transfer market, but they will also need some of the current crop to step up.

And the return of Neto feels key given that Wolves struggled to create much from their left-side last season, with just 26% of the chances they created arriving from that zone, compared to 38% on the right and 36% through the middle. You’ll also notice a distinct lack of actual assists from that area of the pitch on the graphic below.

Neto can operate on either flank, but if deployed on the left, will surely add more unpredictability to Wolves’ play, which in turn ‘should’ produce more goalscoring opportunities.

The prospect of him linking up with Rayan Ait-Nouri down that side also feels exciting. The young wing-back really caught the eye at times last season, showcasing his offensive qualities, and with him overlapping Neto it could cause real problems for the opposition.

Neto’s assist potential will also increase if Wolves’ forwards can step up. Raul Jimenez endured a frustrating 2021/22 with only six goals after getting over his horrific injury, while Fabio Silva failed to score at all. Their respective expected goal (xG) delta’s (-0.60/-2.10) certainly suggest they should be doing much better in front of goal.

So, Neto’s return could be a major positive for Wolves next season, which could see them rediscover their goalscoring touch. The 22-year-old has certainly shown flashes of brilliance during his time at Molineux, and if priced at £6.0m, could be a nice midfield enabler to capitalise on those appealing early fixtures.