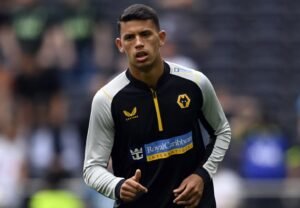 Gameweek 5 of Fantasy Premier League (FPL) is almost upon us, which gives us an opportunity to have a look at some more differential options.

This time, we’ve selected low-owned picks at Wolverhampton Wanderers, Brighton and Hove Albion and Leicester City, who we think have the potential to make an impact.

The box-to-box midfielder was thrown straight into the starting XI for Wolves’ visit to Tottenham Hotspur in Gameweek 3, before his Premier League home debut against Newcastle United on Sunday.

In that time, Nunes has racked up six goal attempts, four shots in the box and one ‘big chance’, and is clearly suited to the advanced midfielder role in Bruno Lage’s 4-3-3 set-up. From that position, it’s expected he’ll get the license to attack and join the front three when the opportunity arrives, given that Joao Moutinho (£4.9m) and Ruben Neves (£5.5m) are more likely to sit in.

Wolves were denied their first Premier League win of the season in Gameweek 4, as a late Allan Saint-Maximin (£6.5m) volley cancelled out Neves’ opener. However, Raul Jimenez (£6.9m) made his first Premier League start of the season, and elements of their attacking play caught the eye at Molineux. Indeed, Nunes had a great chance with a free header from the Mexicans cross in the first half, while his pass for Pedro Neto (£5.3m) almost produced an assist.

That suggests attacking returns are on the horizon, ahead of an appealing two-match run against Bournemouth and Southampton.

Nunes has hit the ground running at Wolves and is perhaps being overlooked as a budget midfielder.

Pervis Estupinan (£4.5m) caught the eye with a lively home debut in Gameweek 4, as Brighton and Hove Albion maintained their unbeaten start to the season.

The energetic full-back/wing-back whipped several dangerous crosses into the box and regularly got forward in Graham Potter’s 3-4-1-2 formation, ending the match with a game-high three created chances and one attempt on goal.

It’s also worth noting that among all players on the pitch, only Moises Caicedo (£5.0m) registered more final-third touches than Estupinan. He didn’t neglect his defensive duties, either, with 10 ball recoveries and two interceptions.

The match saw Brighton keep their third clean sheet in four matches, and with a great run of fixtures, now is a good time to invest in the Seagulls. Indeed, they sit top of our Season Ticker from Gameweeks 5 to 8, a period which sees them face Fulham, Leicester City, Bournemouth and Crystal Palace. They are in fine form, too, having gone nine consecutive top-flight matches without a defeat, extending back to the 2021/22 season.

Estupinan will help cover the void left by the departure of Marc Cucurella (£5.1m) to Chelsea, and while not quite as nailed as team-mate Lewis Dunk (£4.5m), could potentially develop into a first-choice player. If Saturday’s performance is anything to go by, that isn’t far away.

Harvey Barnes (£6.9m) netted for Leicester City in their 2-1 away loss to Chelsea in Gameweek 4, his first goal of the season in just his second start.

The winger was the Foxes’ main attacking threat as he combined well with Jamie Vardy (£9.4m), ending the match with four goal attempts, three of which were on target. That means he’s racked up a respectable five shots in the box in the last two Gameweeks, a tally that ranks joint-seventh among all midfielders.

“Harvey Barnes was outstanding for us, we knocked on the door a lot. There was a lot of good for us but we’re disappointed with the result.” – Brendan Rodgers on Harvey Barnes after their loss at Chelsea

On Saturday’s evidence, further goals and assists will follow for Barnes, who could become an effective differential pick. Indeed, three of Leicester’s next five opponents – Manchester United, Aston Villa and Nottingham Forest – have hardly been convincing defensively so far this season.

Meanwhile, no club has allowed more ‘big chances’ than Brendan Rodgers’ side across the opening four rounds, which suggests they’ll need their attacking players to step up and score if they can’t rely on their defence for clean sheets.

Barnes is a real difference maker in the final third, and after producing six goals and 12 assists in 2021/22, carries significant potential in FPL.