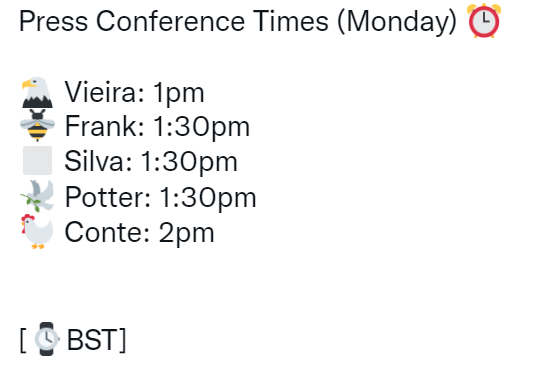 Another Fantasy Premier League (FPL) deadline is fast approaching, with Gameweek 5 representing our first midweek round of fixtures in 2022/23.

And for the first time this season, we may not hear the latest injury news from every Premier League manager before the deadline. Brendan Rodgers and Erik ten Hag, for example, are set to face the media on Wednesday ahead of their meeting at the King Power Stadium the following day.

We’re also not getting bespoke Gameweek 5 press conferences from every manager, so in some cases, we’ll have to make do with some embargoed quotes from post-Gameweek 4 pressers that will be dribbled out over the coming days.

The managers of Chelsea, Everton, Leeds United and Southampton, for example, ought to have been facing journalists today ahead of their Tuesday night games, but weren’t on the schedule. We have, at least, heard from that quartet of head coaches in quotes newly released from Saturday.

What we do hear and know on the fitness front we’ll bring you in this article and in another one on Tuesday afternoon.

With a gruelling Sunday-Wednesday-Saturday schedule preceding the start of the UEFA Champions League group stage, rotation of some degree looks inevitable at Spurs in the next week.

Richarlison is one of the current fringe players who will be hoping to get more game-time across Gameweeks 5 and 6, and Antonio Conte said in Monday’s presser that he will “for sure” be in the starting XI in the “next games”.

Oliver Skipp (foot), Cristian Romero (muscle), Bryan Gil (unspecified) and Lucas Moura (tendon) are likely to be sidelined for the midweek trip to West Ham but all of them are on the cusp of a return.

It’s one in, one out on the suspension front for Chelsea as Kalidou Koulibaly returns from a one-match ban but Conor Gallagher sits out Gameweek 5 after his red card on Saturday.

In freshly released quotes from the post-match presser that Thomas Tuchel delivered on Saturday, the Chelsea boss also revealed that Mateo Kovacic is not ready to last the course in a Premier League game.

N’Golo Kante remains out until after the international break, meanwhile.

“The headache before the season was ‘do we have too many players there?’. It comes to the fifth game of the season and maybe we have only two left with experience in this position, and Kova from the bench. At the moment he’s not ready to play full matches at Premier League level. He has only had one week of training after his injury.” – Thomas Tuchel

Elsewhere, Reece James was namechecked when Tuchel was asked about Cesar Azpilicueta‘s current lack of game-time.

“At the moment, it is one of the toughest decisions because he trains so good and is in such good shape and status mentally. He is pushing everybody, he is fully committed – it’s normally what you want on the field.

“But with the decision to play 4-4-2, it’s at the moment him or Reece James. It’s a luxury problem we have, but when we changed to a back five [against Leicester], we had the chance to have both of them on the pitch.

Patrick Vieira didn’t give us much to go off when it comes to the Crystal Palace team news for Gameweek 5, saying only that the Eagles would have to “wait and see” on injury concerns Wilfried Zaha and Tyrick Mitchell.

Zaha missed the defeat at Manchester City with a knee problem, while Mitchell limped off at the Etihad with what seemed like a muscular issue.

Frank Lampard didn’t host a press conference today but he did have the good grace to give us some team news in the aftermath of the Toffees’ draw with Brentford.

Neal Maupay should be in the squad to face Leeds United but Mason Holgate is facing weeks on the sidelines.

“Neal trained [on Saturday] at the training ground and we will all be in [on Sunday], so he’ll be able to train with some players who didn’t get lots of minutes against Brentford.  We’ll see where he is but he’ll be involved in the squad I’m pretty sure.

“Mason opened up his knee and felt some pain so we’re going to scan it in the next day or so. The feeling is it’ll be weeks, as a maximum, we hope. It may take him out of the next couple of games, for sure, but I don’t want to jump the gun too much on that. Hopefully, it’s not a really bad injury but we’ll scan it in two days’ time.

“As much as it’s difficult in the squad, you need cover and you need to be stable. The ones who aren’t playing don’t like not playing and the ones that are playing hopefully give you stability, so in the moments when Mason comes out and Keano comes on… We’ve got also Seamus there, Ruben that can play left-wing back and Myko who can play left centre-back.” – Frank Lampard, speaking on Saturday

Adam Lallana (calf) is likely out until the other side of the international break, while Albion will assess Joel Veltman, who came off on Saturday with some stiffness in his neck. Graham Potter said the Dutchman was “better today” and that he would be assessed closer to kick-off.

Patrick Bamford (groin) could be back in the Leeds squad to face Everton, while assessment continues on Liam Cooper (calf) after he reinjured himself on the cusp of a comeback.

“Patrick Bamford will be really close for that match, so we should have options.

“[Liam Cooper] picked up a little something in his calf and so we just again decided to be a little bit safe.” – Jesse Marsch, speaking on Saturday

Having not made any unenforced changes to his starting XI this season, Jesse Marsch was also asked about the prospect of Mateusz Klich and Luis Sinisterra starting in Gameweek 5 with the fixtures coming thick and fast.

“I think that we think both are in good form. I thought both played very well against Barnsley. Klichy’s clearly 100% fit and I think that Luis is getting more and more fit. So I think that both will be candidates for the starting XI.

“And then we’ll just try to evaluate physically where guys are at so that we will see who’s ready to repeat-and-go – it’s a good thing that we didn’t push too many guys midweek [in the EFL Cup].” – Jesse Marsch, speaking on Saturday

The team news was short and sweet on the Saints website, which said that the club has no fresh injury concerns ahead of Tuesday’s meeting with Chelsea.

Tino Livramento (knee) is out long-term.