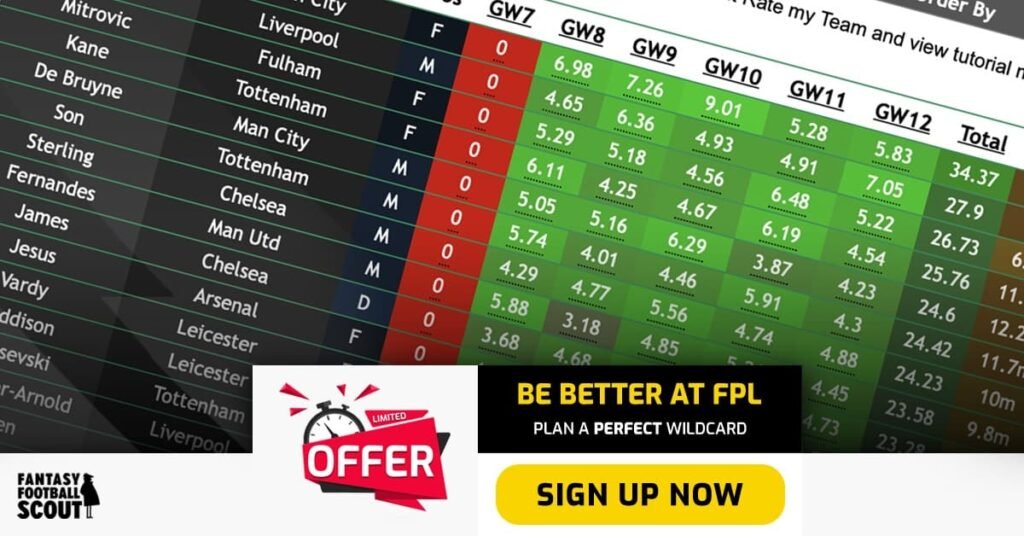 Indeed, just under 50% of site readers say they will activate the chip ahead of Gameweek 9, according to our home page sidebar vote.

With this in mind, we’ll be taking a position-by-position look at the best and most discussed options in each category.

You can read our view on the pick of the goalkeepers here.

The numbers and visuals you see in this piece are from our Premium Members Area, where you can access Opta player and team data for every single Premier League fixture.

We’ll also reveal what our Rate My Team (RMT) tool thinks in terms of points projections for Gameweeks 9-16 at the bottom of this piece.

Let’s start with the inevitable Joao Cancelo (£7.2m), currently on 51% ownership. The full-back has returned in four of his seven matches, and Saturday’s win at Wolverhampton Wanderers brought him three bonus points despite the fact that he was not involved in any of the goals.

He has already matched the one goal of last season but it’s assists where the Portuguese international truly excelled in 2021/22. With 18 penalty area touches being the most of all defenders, he continues to contribute high up the pitch.

He’s curiously only 24th among FPL defenders for expected goal involvement (xGI, 0.71) this season but we’re still in the embryonic stage of the season and even just one big chance created, which we know he is capable of, will catapult him up the standings in this tightly packed together field.

As for clean sheet potential, Manchester City not only have more of those already than any other team but have allowed fewer shots (40), shots on target (12) and expected goals conceded (xGC, 3.96) than anyone else.

They do, however, have a Blank Gameweek 12, following last week’s announcement that the match with Arsenal has to make way for the Gunners’ Europa League clash against PSV Eindhoven.

With plenty of time for FPL managers to plan ahead, this shouldn’t deter non-owners from bringing Cancelo in.

There is ongoing nagging uncertainty over the role of Reece James (£6.0m), who has sporadically been used as a centre-half instead of showcasing his devastating wing-back strengths.

James did reassuringly start at right wing-back during Graham Potter’s first game in charge of the Blues and posed plenty of attacking threat, only moving to centre-half for the final 10 minutes.

Chelsea’s clean sheet potential looked to be on the rise with the big-money signings of Wesley Fofana (£4.4m) and Kalidou Koulibaly (£5.5m) but the latter has had his initial struggles and neither was named in Potter’s first starting XI against RB Salzburg last week.

Still, the new Chelsea boss did turn Brighton into a defensively competent outfit during his time on the south coast, and hopes are high that he’ll not just solidify a wobbly backline but allow James the freedom to express himself further forward.

The 2021/22 campaign saw James deliver five goals and nine assists from just 1,867 league minutes – less than 21 full matches. He already has one of each this time, with an xGI that is only beaten by Trent Alexander-Arnold (£7.4m) amongst defenders.

The fixtures are also about to improve for the Blues, who avoid all of last season’s top four between now and the World Cup break.

Some managers were punished for going with the Chelsea defensive double-up in the early weeks of the season but perhaps Marc Cucurella (£5.2m) is on the radar again now that Potter is around, with the Spaniard vital to how his new/old boss set up at Brighton.