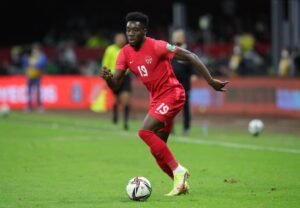 Our World Cup Fantasy team previews continue with a look at Canada, who are making their first appearance in the tournament since 1986.

It’s been a long wait for Canadian football. Not only is this their first World Cup since 1986, they hadn’t even reached the final qualification group since trying for France 1998. Suddenly, this exciting bunch of talent will have two World Cups in a row, as co-hosts of the 2026 tournament.

Unseeded within the CONCACAF region, it meant that 20 matches separated the Canadians from achieving their dreams. Not a problem. 27 goals arrived in the first group stage’s four games, including an 11-0 walloping of the Cayman Islands.

Haiti were then put aside in a playoff to reach the final ‘Octagonal’ stage. Here, they scored the most, conceded the least and were unbeaten against both Mexico and the United States, although it was the former whose stoppage time winner ended Canada’s Gold Cup run at the semi-final stage.

In June, there were two Nations League games: a 4-0 win over Curacao in Vancouver followed by a 2-1 loss against Honduras. The latter was played in testing conditions, with a water-logged pitch making it difficult for both sides to play.

Then, there was a 2-0 win over Qatar and a 2-0 loss to Uruguay in September. Despite losing to Uruguay, Canada dominated possession and outshot their opponents but were unable to capitalise on several occasions.

“Belgium and Croatia are perhaps not the forces they were four years ago but they will still provide a stern and I fear unsurmountable task for Les Rouges. Morocco are the fourth team in the group and rank a full 19 places higher in the FIFA world rankings so we face a tough task in gaining our first ever World Cup points! The one thing on our side is the ignorance of youth – no-one expected us to even qualify and in Jonathan David and Alphonso Davies we have our best ever crop of talent,” – Ryan Quinn

“I expect Canada to exit honourably at the group stage having given one of Belgium or Croatia a scare and beaten Morocco. Canada are a team on the rise and in another group I’d have more hope of a last 16 appearance. But I expect Belgium and Croatia to be too strong and to have enough individual quality to take advantage of a defence that is untested at this level.” – Alan Sheppard

“Group stage exit (in fourth place). The opposition in this group is at a much higher level.” – Phil Zirkwitz

“I think one of our strengths is how little the world knows about our players. We only have three players in the predicted roster line-up that currently play in Europe’s top five leagues and, as a result, we could catch a few teams cold. On the pitch, our teamwork and togetherness cannot be underestimated, while tactically we are versatile. We can operate with a back three or back four, changing between the two systems almost seamlessly in game and between games. The width Alphonso Davies and Richie Laryea provide will be a constant threat and the pace we possess could trouble Belgium in particular.

“Mainly this team has captured the attention of the whole nation and they go to Qatar with nothing to lose. I feel this could galvanise them to an extent and they will not die wondering.

“Our coach John Herdman is also a major strength for us. The team have really bought in to his methods and he’s gone via women’s football to be the coach of our men’s team and his hunger and desire to make his mark give this team an extra 10%.” – Ryan Quinn

“Traditionally none, but the current team has a really fantastic crop of exciting wingers. Everybody knows about Alphonso Davies, but Tajon Buchanan of Club Brugge is lightning quick and caused real problems for the US and Mexico. He may not start every game, but I’d expect him to cause a lot of problems as an impact substitute.” – Alan Sheppard

“Our biggest strength is also our biggest weakness in that we really want for experience and as I said earlier, we only have three players in Europe’s top leagues. Most of our squad is from the American league or dotted around Europe. Atiba Hutchinson will be crucial for us for just this reason. Whether we have enough quality to overcome this remains  to be seen but I have my doubts.’ – Ryan Quinn

“The defence is largely untested outside of Concacaf. Steven Vitoria is an aging centre-back who’s had a good career in Portugal and Kamal Miller and Alistair Johnston are promising but raw. Vitoria is quite slow and Miller has struggled against pace at times too. Central midfield is a slight problem too. Canada got overrun playing two in midfield against Uruguay in a recent friendly, so I wouldn’t be surprised to see three central midfielders for more control.” – Alan Sheppard

“Centre-back is an area of weakness.” – Phil Zirkwitz

When available, Bayern Munich full-back Alphonso Davies ($5.0m) is undoubtedly Canada’s best player. He is usually deployed further forward as a number 10 by John Herdman, “where he can hurt people most”, and provided eight assists during qualifying. In addition, he also created 32 chances, more than any other teammate.

Canada are keeping a close eye on Davies after he sustained a hamstring injury in Bundesliga action, but he is in the squad, and media reports suggests he’s on course to be fit.

“In terms of Fantasy, Alphonso Davies stands out at $5.0m in the World Cup game. Clean sheets may not be in rich supply but with seven points per goal for defenders and the assist potential, Alphonso really rates as our best option. He quite often plays OOP. He’s also on pens!” – Ryan Quinn

Goalkeeper Milan Borjan ($4.5m) and full-back Sam Adekugbe ($4.5m) are cheaper alternatives to Davies at the back, although spending the extra $0.5m on Davies is advisable if he’s fit.

“Milan Borjan is one of our most experienced players and if we are to do anything in this tournament then he will need to be inspired and at just $4.5m he could be one for save points.” – Ryan Quinn

“Sam Adekugbe at left-back was one of the breakout stars of Concacaf qualifying and likes to get forward. I’d tip him as a good value pick who might chip in with a goal or assist.” – Alan Sheppard

Further forward, Jonathan David ($6.0m) has hit 22 goals in 34 internationals. He also has nine goals for Ligue 1’s Lille this season and is widely regarded as one of Europe’s top young strikers. In qualifying, he posted team-leading totals for shots (45) and penalty box touches (87).

“Jonathan David is likely to be the focal point of the attack and should be the best bet for goals (Cyle Larin has barely played for Club Brugge this year and may have lost his starting place). He is likely to be taking penalties, too, with Alphonso Davies and Cyle Larin as the alternatives if David is off the pitch.” – Alan Sheppard

“Rating second has to be Jonathan David at $6.0m. He’s our main attacking outlet after Davies and the Lille Striker has two goals in his last four for us.” – Ryan Quinn

Stephen Eustaquio ($5.5m) is a bit of an unsung hero and takes up a deep-lying playmaker role for Les Rouges, with his passing and creativity key to Canada’s build-up play. Indeed, his 859 successful passes in qualifying was comfortably more than any of his teammates.

“Honourable mention to midfielder Stephen Eustaquio who takes a fair few set pieces and has added goals to his game this season at Porto. He’s probably Canada’s most important player, if he’s out then the quality in Canada’s midfield drops rapidly.” – Alan Sheppard

Canada are flexible in their tactical approach and can use a back three – usually against higher-quality opposition – or a back four.

As a result, our experts have differing opinions on which set-up will be used, with Ryan suggesting a 3-4-1-2 to give Canada a bit more protection against Belgium.

However, Alan and Phil both think it’ll be a 4-3-3, so there is plenty of uncertainty heading into Matchday 1.