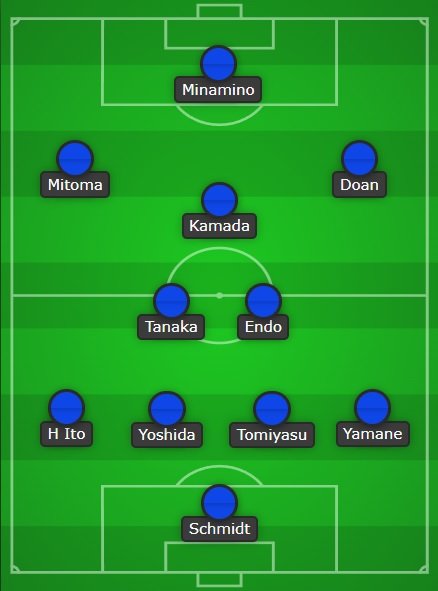 Our World Cup Fantasy team previews continue with a look at Japan, who will need to overcome at least one of Spain and Germany to make the round of 16.

Japan were rampant in their first set of group games, with 14-0 and 10-0 demolitions of Mongolia and Myanmar part of a monstrous +44 goal difference gained from just eight appearances.

However, there was no 100% record in the final round, as very early defeats to Oman and Saudi Arabia gave them no more room to slip up. From there, 19 points from a possible 21 meant Japan overcame the hiccup and secured second place.

This will be their seventh World Cup appearance in a row.

From there, each match has either been in the Kirin Challenge Cup (essentially friendlies), Kirin Cup (a four-team tournament) or the East Asian Football Championships (not listed here because the squad was purely domestic-based).

Their only real blip came during June’s surprise 3-0 defeat to Tunisia but was followed by a win and draw versus the United States and Ecuador.

A mostly second-string team took on Canada in their final warm-up match on November 17.

“I think we will go out in the initial group stage. Spain and Germany are both there, so it’s hard to see us progressing.” – Darren Griffin

“Our strengths are that we are fairly solid at the back yet also have some very good technical players.” – Darren Griffin

“Without doubt, I’d say our weakness is the lack of strength in depth. Beyond the first XI, there’s not much.” – Darren Griffin

Fantasy Premier League (FPL) managers will be familiar with several names in the Japanese squad.

Meanwhile, Liverpool fans will be interested to see that Takumi Minamino ($7.0m) is on free-kicks and scored ten times during qualifying.

Minamino, who registered more than twice as many big chances as any of his team-mates in qualification, was the one and only Japan player to score a penalty during qualifying but Daichi Kamada ($5.5m) has been taking them for Eintracht Frankfurt this season and could have a say.

Brighton and Hove Albion’s Kaoru Mitoma ($5.5m) has both scored and assisted over his two most recent Seagulls appearances but he’s listed as a forward here and is competing with Junya Ito ($6.0m) in the pecking order.

Ito had a team-leading seven orthodox assists throughout the two group stages.

In terms of potential bargain buys, Daniel Schmidt ($4.0m) is many Japanese pundits’ favoured goalkeeper for the group opener but there is still an air of uncertainty over who Moriyasu plumps for between the sticks.

“Kaoru Mitoma – When he plays, a lot goes through him and he scores a few too.

“Daichi Kamada – In very good form for Eintracht Frankfurt, including a few successful penalties. We don’t get many of them ourselves.

“Takehiro Tomiyasu – Likes to get forward for Japan but the recent tendency to play him at centre-back will limit his points.” – Darren Griffin

Our expert predicts starts for Mitoma and Kamada over Osaka and Junya Ito, with Hiroki Ito ($4.5m) starting at left-back instead of the injured Yuta Nakayama ($3.5m).