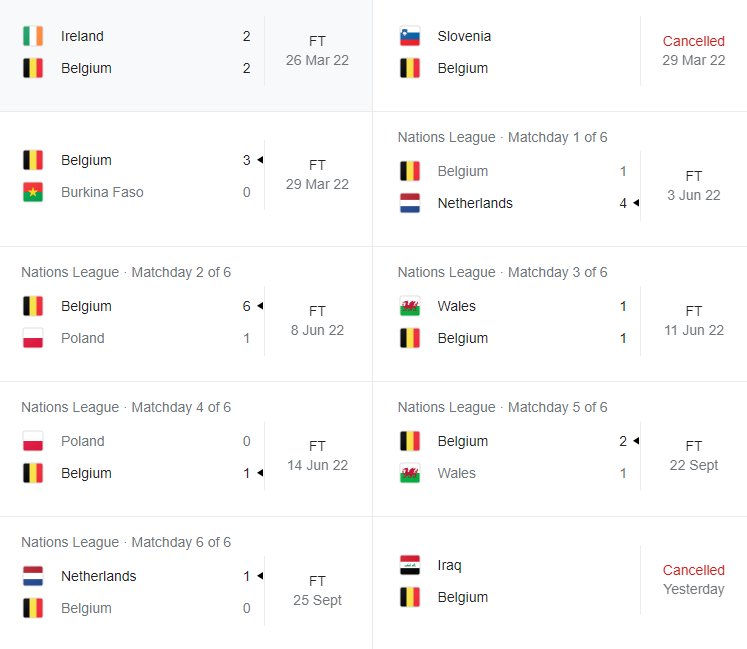 Our World Cup Fantasy team previews continue with Belgium who recorded their best-ever result at a World Cup last time out – coming third at Russia 2018.

Expectations are lower this time, however, with an aging squad and injury concerns for key players.

Some Red Devils fans are grumbling about “the Golden Generation” having squandered its best chances to win tournaments already (sound familiar England fans?).

Veteran coach Roberto Martinez and his veteran troops will be hoping to silence the critics in what will be the last chance at a major tournament for many big names.

In these country-by-county guides, we’ll be looking at the best players from each nation, taking a stab at predicted line-ups, reviewing the road to Qatar and more.

We’re mostly going group by group with our previews but some nations may not follow that order as we await input from correspondents for the other countries.

Coach Roberto Martinez guided Belgium to qualification undefeated. They topped their group with 5 points to spare. They were prolific in front of goal too, averaging over 3.1 goals per game.

2022 has been mixed for the Red Devils. Starting the year with two friendlies, a 2-2 draw away to Ireland was followed by a routine 3-0 win over Burkina Faso.

In the Nations League in June, they capitulated to the Netherlands, losing 4-1 at home. They did bounce back just days later with a 6-1 demolition of Poland.

A 1-1 draw with Wales away was far from inspiring, but they did recover to win the next two away in Poland and in the return fixture with Wales.

The Nations League campaign ended as it began, however – another loss to the Netherlands, all be it by a less humiliating 1-0 scoreline on that occasion.

“Last 16. I can see us getting out of the group stages with seven points, as we should be able to beat both Canada and Morocco. Croatia should be quite an equal game based on the squad strength.” – Koen Bauwens

“Always hard to predict but I wouldn’t be surprised if our World Cup story would end in the last 16.

“It’s Roberto Martinez’s third big tournament with Belgium. Despite not having many fans in Belgium left, I believe he has never been in doubt for his employer due to a couple of reasons. Since taking charge of the national squad in 2016, he has integrated his style of play and realised one of his biggest achievements finishing third in the world cup of 2018. When former technical director, Chris Van Puyvelde, left for the same job in China, the Belgian Football Association offered Martinez a double job offer which he accepted. This means he has been working on creating a Belgian identity which we never had.

“But did Martinez learn any lessons from the previous big tournaments and regain trust by solid decisions in selection, line-ups and substitutions?

“Besides the personal capabilities of the head coach, there are probably more important concerns. Lukaku recovered after the most serious injury of his career but got a setback straight away, three weeks before the World Cup. Together with Thomas Meunier and Alexis Saelemaekers, they are the three main injury concerns.

“The last one will be very close but the nation is more concerned about the first two since they’re expected in the starting line-up. So taking everything in mind, my guess is that our story will end in the last 16, when we’ll probably face Germany or Spain. Both sides would come into this game as slight favorites but it won’t be a huge upset if Belgium would come out on top.” – Jippe Van Looke

Belgium may have finished third in the previous World Cup but expectations are lower this time around. The “Golden Generation” are showing signs of age and fitness concerns for key players heading into the tournament do not help.

Their form in 2022 can only be described as mixed. The only time they have faced stern opposition was the Netherlands and they lost on both occasions. Expectations of them making it through any tough knockouts are low.

The quarter-finals would be a credible expectation. But when they have stars like De Bruyne and the mercurial Eden Hazard (yes, he still plays!) can we really write them off? We should, if we believe algorithms and betting odds. But where’s the romance in that?

“Kevin De Bruyne is our biggest strength. Apart from that, we have been fairly good at counter-attacking in recent years – Chadli’s goal against Japan in the 2018 WC comes to mind.

“We have the world’s best goalkeeper in Thibaut Courtois as well. It won’t be enough with the defence in front of him though.” – Koen Bauwens

“The biggest strength of the Belgian squad is the counter-attack. In tournament history, there are a couple of examples which will prove this. The goal against Brazil from De Bruyne or the last-minute 3-2 of Nacer Chadli against Japan. Due to our biggest concern/weakness (ie the defence), I suspect a more counter-playing Belgium in comparison to other tournaments. This could prove a life-saving strategy from the knock-out stage onwards.” – Jippe Van Looke

Consistency in selection is important to Fantasy managers and with Roberto Martinez entering his sixth year at the helm and playing a settled 3-4-2-1 with established players, nobody is expecting too many surprises.

This also gives Belgium a lot of experience: 11 of their 26 players are 30 or older.

They also have a relatively kind group and are favourites to top Group F. Openers against Canada and Morocco look tempting targets. Croatia in the final group game is tougher but is still very winnable. They may not make it through tougher knockouts, but they could still score well early in the tournament.

Targeting the attack is the play with Belgium. In eight matches in 2022, they scored 16 goals. That statistic is admittedly a bit soft because if you take out their 6-1 thrashing of Poland, it’s 1.4 goals per game. But that’s still plenty of encouragement for those seeking Belgium’s attacking assets.

The defence. Belgium defend with a high line and Vertonghen and Alderweireld are not at the level they were a few years ago. With a combined age of 68 years, it’s easy to believe they could get caught out.

Belgium have only two clean sheets in the last eight. They have conceded to teams like Wales and Ireland that they would be expected to beat.

“Like I mentioned above, our defensive capabilities are our biggest weakness without a doubt. This has to do with different factors. First of all, it’s the formation we play in. We play with three centre-backs and still have to rely on the same players. Alderweireld and Vertonghen are still standing strong in the first XI of Martinez but it does come with a cost: “pace”. We’re extremely vulnerable with space behind our defensive line but also in 1v1 situations. For this reason alone, I expect us to rely more on our counter-attacking capabilities to cover our own weakness. In the group stage, we could be quite attacking but playing against the likes of Jonathan David and Alphonso Davies of Canada we could be punished straight away.

“One of the big question marks for the starting XI is the third centre-back position. We’ve played many players in that situation and it seems that there is simply no stand-out pick. For all of the options, there are question marks at the moment, whether it be form, experience or quality. ” – Jippe Van Looke

“The defence is extremely vulnerable and aged. There are also doubts about the attack: Eden Hazard being out of form, an aged Mertens and the possible absence of Lukaku.” – Frederick Meynen

“A lack of squad depth, a lack of fitness for key players (e.g. Romelu Lukaku, Eden Hazard) and a stubborn coach who seems to prefer playing non-fit players (Hazard) over in-form players who are doing great at their club (Leandro Trossard). Martinez is too loyal to certain players, even if they don’t play at their club.

“Also, an old defence: we’ll likely still be playing Alderweireld and Vertonghen, who have a combined age of almost 70 and currently both plying their trade in the Belgian Jupiler Pro League.” – Koen Bauwens

“Meunier (if fit) or Castagne right-back are interesting prospects for a very attacking Fantasy defender who could offer lots of points at both ends of the pitch.

“If fit, Lukaku has to be seriously considered, too: he’s always nailed and shares in almost every goal or assist. Trossard could be a steal at $5.5m if he can gain confidence of Martinez.” – Frederick Meynen

“De Bruyne (who is on free-kicks and corners), Trossard if he gets the nod and Lukaku if he’s fit. Batshuayi is worth a punt if Lukaku’s not fit for the group stages. Tielemans maybe.

“I’d stay away from any defensive assets.” – Koen Bauwens

Romelu Lukaku ($9.5m) would be high on Fantasy managers’ radars if he was fit. After his Chelsea flop, life has not got much better for him. He has only made four appearances at Inter so far this season due to a hamstring injury. He may come into contention if we see him appear later in the groups.

Michy Batshuayi ($6.5m) is very likely to start the first game though and he has a much kinder price tag. He is in decent form for Fenerbache, managing seven goals including a hat-trick in October 2022 in the run-up. He also managed three goals and as many assists in five appearances in the Nations League. Promising.

Kevin De Bruyne ($11m) is likely to be highly owned, with two goals and one assist in the Nations League. There is little doubt he is in the mix for both goals and assists… but will he justify his price tag?

Thomas Meunier ($6.0m) could be a solid choice – if he’s fit, that is. If selected, he’ll be bombing down the wings as always and has significant assist and goal potential. Given Belgium’s frailty at the back, the price could be a touch high. But they are in a kind group and there is potentially a high upside to including Meunier, should we get the thumbs-up on his availability.

If we pick Eden Hazard ($8.0m), it’s more in hope of him taking his last chance to shine on a big stage than anything else. He should start but minutes will be managed. No goals for Belgium this year but he has managed two goals in eight matches in 2022 for Real Madrid.

Leandro Trossard ($5.5m) is an intriguing budget option who is well capable of attacking returns. He will likely be used as a super sub, mind.

Hans Vanaken ($7.5m) is in a similar mould except more expensive. His record of goals and assists is good for Belgium historically, and current form is decent for Club Brugge. But, he’s unlikely to start.

Thibaut Courtois ($6.0m) is at the time of writing the most highly-owned keeper in the official game, which is perhaps surprising given Belgium’s shaky defence. Perhaps the wisdom of the crowd is looking kindly upon Belgium’s opening two fixtures – or it could be auto-picks…

Martinez should stick to his formula with a 3-4-2-1 (3-4-3 in some listings!). Either way, Batshuayi or Lukaku will be ahead of De Bruyne and Eden Hazard most likely.

The lineup is largely settled but there is uncertainty about which centre-back to play alongside Alderweireld and Vertonghen. Faes perhaps looks most likely, with the youngster Debast inexperienced and mixed performances. Dendonker would be an option, too.