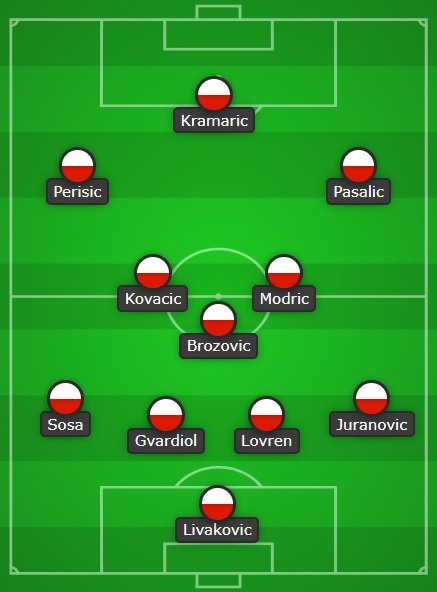 Our World Cup Fantasy team previews continue with a look at Croatia, hoping to build on a fabulous tournament record since gaining independence from Yugoslavia in 1991.

Now in good form, it had been a mostly disappointing time for Croatia after they brilliantly reached the 2018 World Cup Final.

They soon had a 6-0 defeat to Spain, before losing five of their six games in the 2020 Nations League. After more misery in their opening Group H qualifier against Slovenia and an underwhelming Euro 2020, an injection of young talent was desperately needed to complement their wonderful but ageing core.

By doing so, things instantly improved for the Croats. They edged ahead of Russia for automatic qualification to their sixth World Cup from seven attempts.

The majority of this year’s appearances have been in Group A1 of the Nations League. Croatia lost the first match 3-0 at home to Austria, yet ended up topping a difficult group ahead of France and Denmark.

Consecutive 1-0 away wins to the Group D duo showed a resilience to Dalic’s side – something which they hope to replicate both this winter and in next year’s ‘final four’.

One final friendly was played on Wednesday night, where they again emerged with a 1-0 victory. The likes of Luka Modric ($8.5m), Ivan Perisic ($7.5m) and Mateo Kovacic ($6.5m) began on the bench, as did match winner Andrej Kramaric ($6.0m).

“Depending on the opponent, I think it’ll be the round of 16 or quarter-finals. As a current World Cup runner-up and UEFA Nations League semi-finalist, Croatia surely has the quality to get out of Group F. Then, they’ll likely face either Spain or Germany. That is no easy task.

“They have midfield quality, lots of experience and strong form. The heart of the team is in the middle with Luka Modric, Mateo Kovacic and Marcelo Brozovic ($6.0m). Few nations have more quality in the midfield than that.

“A young and mobile defence allows the trio to play even further upfield than previously. More than half of this team were also at the last World Cup, with their knowledge of how to win important games soon spreading to club level – Modric, Kovacic, Perisic and Dejan Lovren ($4.5m) have all since won the Champions League.” – Hrvoje Radman

“Since Mario Mandzukic retired, there isn’t a striker who can score regular international goals. Dalic tried various options but none of them could even come close to replacing Mandzukic’s scoring record.

“The second weak spot could be the goalkeeper position. Dalic has given a chance to four different keepers since last 2018. It looks like Dominik Livakovic ($5.0m) will win the battle but he also isn’t convincing.” – Hrvoje Radman

“With the lack of a proven striker, Perisic plays in a more attacking role than at Spurs and is their biggest threat, also sharing set-piece duties with Modric.

“Left-back Sosa has provided over 20 assists over the last two-and-a-half years for Stuttgart and scored his first international goal against Denmark in September. From a Fantasy perspective, I recommend selecting a defender, after keeping seven clean sheets during qualifying.

“Modric is also an option because he takes about 80% of all set pieces, including penalties.

“It’s also worth mentioning two more players who could be hidden gems if they start. Forward Marko Livaja ($5.0m) is having a good domestic season, whilst Lovro Majer ($5.0m) is an attacking midfielder that is attracting interest from Europe’s biggest clubs.” – Hrvoje Radman

As Perisic is yet to truly take off in Fantasy Premier League (FPL) – with no goals and four assists from defence – managers may find it hard to then choose him when listed as an attacking player. Yet he was their joint-top scorer in qualifying with three goals.

It’s interesting that Hrvoje picks out Sosa because his $3.5m price looks very low. If that left-back spot is his to keep, what a bargain he could turn out to be.

With different forwards being used in recent friendlies, it’s probably best to initially stay away from all Croatian options there.