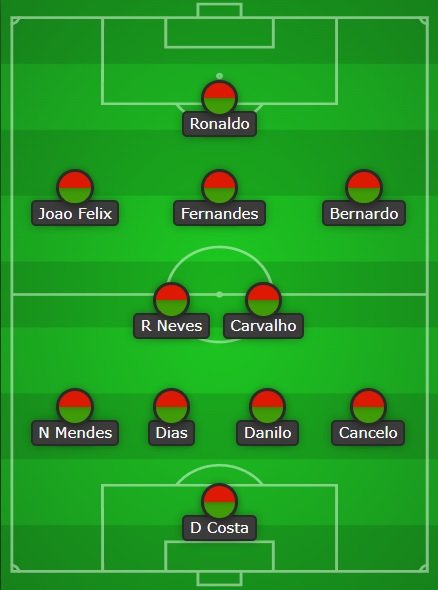 Our World Cup Fantasy team previews continue with a look at Portugal, as captain Cristiano Ronaldo ($10.0m) arrives amidst the controversy of a much-publicised interview that will surely end his time at Manchester United.

Top spot was dramatically snatched from Portugal in the last minute of the final match, thanks to a header from Aleksandar Mitrovic ($7.0m) in Lisbon.

Good luck soon followed as North Macedonia’s shock elimination of Italy prevented the last two European champions from having to face off for one World Cup entry. A Bruno Fernandes ($9.5m) brace brushed off the Macedonians with relative ease.

In truth, Portugal have been better at recent European Championships than World Cups. And the early Euro 2020 elimination saw three of the four matches be against France, Germany and Belgium, which feels unfair to criticise.

Since then, Ronaldo and co came second in this summer’s Nations League Group A2. Although their last six outings have contained two defeats, there has also been a trio of emphatic 4-0 victories.

This includes Thursday night’s warm-up friendly against Nigeria, where the line-up looked strong until you remember how deep Portugal’s talent pool is. A strong XI, yes, but still without Joao Cancelo ($6.0m), Ruben Neves ($7.5m), Rafael Leao ($8.0m) and an ill Ronaldo.

“I expect my team to make it to the final and win the entire tournament. We have been in such good form since the World Cup qualifiers.” – Jeffrey Marques Oliveira

“Even though we are considered one of the favourites, I expect Portugal to be knocked out in the last 16, mainly because we have a poor manager that fails to deliver in the big moments and focuses a lot on the defensive part of the game, missing out on the best qualities of some other big names in our squad.

“Our team mainly focuses on delivering crosses to Ronaldo, who has been declining in form, and we don’t have other answers when ‘CR7’ doesn’t deliver. This is why I expect Portugal to move ahead in the group stage in second place and to be knocked out by Brazil, which I expect to top their group.” – Nazif Mahomed Sidique

“I believe Portugal’s strength is in the attack, having averaged 1.7 per match during qualifiers and scoring plenty since. From a Fantasy perspective, there are a substantial amount of points to unlock within Portugal’s attack.” – Jeffrey Marques Oliveira

“We have a very strong squad individually and have a very physical midfield with some big-name defensive midfielders such as Neves, Palhinha and William Carvalho and, of course, we have a world-class striker in Cristiano Ronaldo, who is very capable of delivering in any game.” – Nazif Mahomed Sidique

“Our main weakness is the lack of world-class wingers and central defenders.

“Rafael Leão is one of the few big-name wide-men but still has had little to no impact on the national team.

“There is little depth at centre-half, with Pepe and José Fonte of very advanced ages. I don’t think they can deliver on the big stage if they are called upon.” – Nazif Mahomed Sidique

One of the strongest, most talented squads there will be Portugal’s. Fantasy Premier League (FPL) managers are well aware of the heavyweight capabilities of Fernandes, Ronaldo and Bernardo Silva ($9.0m), who will be sharing corner and free-kick duties between themselves. Obviously, penalties go to Ronaldo.

“A considerable amount of players will go for Cristiano Ronaldo and Joao Cancelo from the get go. If you are going to triple-up on Portugal, a third option I really like is Bernando Silva.

“Many will probably be looking at Bruno Fernandes since he tends to play behind Ronaldo in a 4-2-3-1 system but Bernardo has been providing a lot of assists from the right wing. If Ronaldo starts, Bernardo tends to be alongside him.”– Jeffrey Marques Oliveira

Group H is generally hard to call but they’ll be backed to emerge on top, with defenders Cancelo and Ruben Dias ($5.5m) amongst the world’s best.

Dias’s centre-half partner, Danilo ($4.5m), is a much cheaper route into the backline if needed.

Amongst the many, many things said during Ronaldo’s explosive interview, he admitted this will “probably” be his last World Cup, so there’ll be a single-minded determination to both go out on a high and send a message to Man United. Good news for his Fantasy potential?

Jeffrey thinks there’s a chance that the out-of-form William Carvalho ($6m) will be replaced by Joao Palhinha ($6.5m), with further uncertainty over whether Rafael Leao or Joao Felix ($8.0m) step in for the injured Diogo Jota.