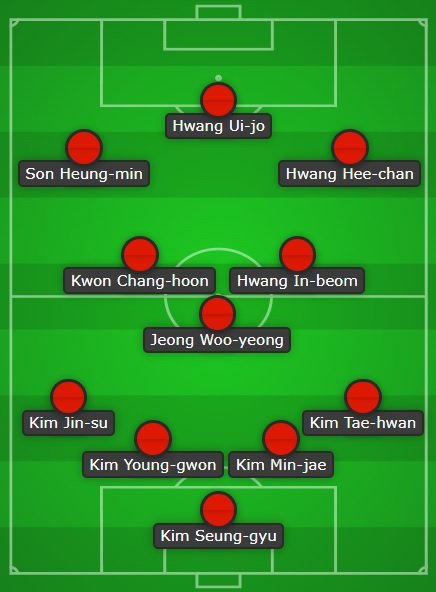 Our World Cup Fantasy team previews continue with a look at South Korea, who qualified for their tenth successive tournament with relative ease.

Only Brazil, Argentina, Spain and Germany are on a longer streak of World Cups, with the latter being victims of a memorable 2-0 South Korea win in the 2018 group stage.

A dozen clean sheets have been kept during these 16 qualifiers, with their first group stage reduced once neighbours North Korea withdrew because of Covid-related safety concerns.

An 8-0 win plus two 5-0s saw easy progression into the final phase, where South Korea’s only defeat came in the final match once their golden ticket had already arrived.

The final four qualifiers were part of 13 matches that have taken place this year – not including the East Asian Football Championships, where squads were purely domestic-based.

Nine wins and seven clean sheets from these hint that the team is in a good place, averaging just over two goals per game.

There have been various opponents from South America and Africa in preparation for the meetings with Uruguay and Ghana, although June’s heavy 5-1 loss to Brazil will be of concern.

“My hope is that we’ll progress into the round of 16. With strong teams like Portugal and Uruguay in our group, it will be a tough task, while Ghana is no easy game either. Beating the Ghanaians will be crucial for our chances of progression.” – Sonaldo

“We have two world-class players in Son Heung-min ($8.5m) and Kim Min-jae ($4.5m). Their roles will obviously be crucial but we also have a strong underdog team spirit and mentality that can hopefully be sparked during the tournament.” – Sonaldo

“Our main problem is that roughly half of our players have no experience in the top European club leagues. The quality gap between our stars and squad players is quite large but, again, hopefully that team spirit can counteract this.” – Sonaldo

“The only ones that really matter for World Cup Fantasy are Premier League pair Son Heung-min and Hwang Hee-chan ($6.5m). While Hwang Ui-jo ($5.5m) is owned by Nottingham Forest, he has been loaned out.

Off-puttingly listed as a forward in this game, Son is in a race against time to make the first match. He suffered a nasty facial injury in Tottenham Hotspur’s latest Champions League match and is seen wearing a mask in the latest training photos.

Hwang Hee-chan meanwhile assisted four times during qualification but isn’t playing much for Wolverhampton Wanderers, so is short on match-fitness himself.

With talisman Son on all set pieces and a defence likely to concede, options are scarce elsewhere in the team. Kim Seung-gyu is a cheap-ish $4.5m goalkeeper but save points against the prolific attacks of Portugal and Uruguay are probably more likely than clean sheets, while the abundance of $4.0m shot-stoppers elsewhere in the tournament does make his appeal pretty much non-existent.