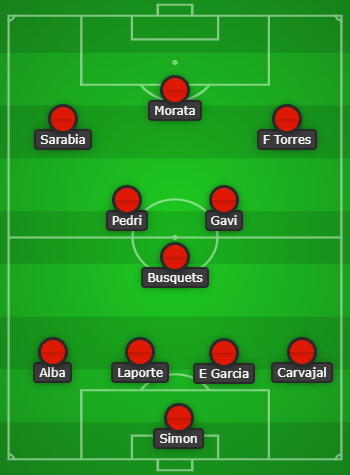 Our World Cup Fantasy team previews continue with a look at Spain, hoping to better the two disappointing attempts that followed their 2010 success.

It’s now 12 World Cups in a row, although Spain entered their final qualifier still unsure of this status. A late Alvaro Morata ($8.0m) winner eventually put Sweden to rest – the side that defeated them earlier on.

The Spaniards had a good time when reaching the Euro 2020 semi-finals, although it should also be said that only one match was won within 90 minutes. Soon after, they gained revenge on Italy by going to Milan and ending their world-record 37-game unbeaten streak.

That win in Milan put Spain into the 2020/21 Nations League final, where they took the lead but lost 2-1 to France. This summer’s Nations League has also been a success, topping Group A2 to ensure they will take part in next summer’s final-four showdown.

Away wins at fellow qualifiers Switzerland and Portugal offer tournament promise, although the Swiss did subsequently beat them in September.

“I’d probably have to say the quarter-finals or semi-finals at a push. Having said that, the conditions in Qatar may suit Spain in terms of how well they keep possession in order to save energy.

“I think they play more ‘directly’ under Enrique than they did under Vicente Del Bosque, tending to use more out-and-out wide forwards in recent years.

“Spain are one of the favourites to win the tournament but I think it is a tough task. However, anything is possible – all bets are off given that this winter tournament is a new situation for everyone.” – Zonerism

“Spain are blessed with plenty of technically-gifted players, so their strength is in midfield with some lovely dribblers to help with tight areas and breaking into the final third.

“Under Enrique, players commit quite high up the pitch to play some intricate football around the opposition’s penalty area. But they can also get into wide areas to cross or pull the ball back.” – Zonerism

“I’d say that one of Spain’s main weaknesses is a lack of mobility and pace in some areas of the pitch. Also, they may be vulnerable in wide areas as the full-backs aren’t particularly quick, making them vulnerable to a counter attack.” – Zonerism

No defender in this game has a higher price than $6m, which leading full-backs Dani Carvajal and Jordi Alba were both given.

They have attacking capabilities – highlighted by Alba racking up a team-high four assists during qualifying and topping the chances created column for his nation – but are one of the few major nations where the starting goalkeeper could be the cheapest, safe route into covering their backline. Unai Simon ($5.5m) is undisputed number one.

In truth, rotation risks abound in a lot of positions: central midfielders Pedri ($8.5m) and Gavi ($7m) are tipped for greatness but there’s such depth to Spain’s engine room that starts aren’t 100% assured for even these wonderkids.

The same applies out wide, where Ferran Torres ($7.0m) and Pablo Sarabia ($7.5m) perhaps have the edge for the Costa Rica game but where stiff competition is provided by the likes of Dani Olmo ($8.0m) and Ansu Fati ($7.5m).

“Aymeric Laporte ($5.5m) – Arguably Spain’s best pound-for-pound defender. Group E is not easy by any means but matches against Costa Rica and Japan offer the potential for clean sheets, whilst Germany are a bit unpredictable.

“Jordi Alba – Should be the first choice left-back now that injured Jose Luis Gaya ($5.5m) has had to withdraw. Laporte appeared to play there against Jordan but this was likely just an experiment from Enrique. Alba still has plenty to offer, with ten goals from 87 appearances.

“Ferran Torres – The 22-year-old has netted 13 times in 31 appearances and can play anywhere across the front three. He impressed at Euro 2020 and no outfielder started more of Spain’s qualifiers.

“Alvaro Morata ($8.0m) – Much criticised but he gets in the right positions and has a respectful scoring record for Spain.” – Zonerism