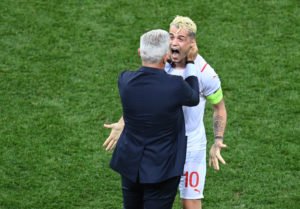 In these country-by-county guides, we’ll be looking at the best players from each nation, taking a stab at predicted line-ups, reviewing the road to Qatar and more.

It’s now an impressive nine of the last 10 major tournaments that the Swiss have qualified for, with memories still fresh of last summer’s EURO 2020 penalty shoot-out victory over France.

This time, both they and Italy were unbeaten and defensively strong but Murat Yakin’s side took the top spot. What will frustrate Fantasy managers is that their 15 goals came from 12 different players, with only Breel Embolo ($6.5m) and Steven Zuber ($5.5m) scoring more than once.

Despite losing the first three matches of Nations League Group A2, Switzerland rallied to win the final three that included a 1-0 over Portugal and a 2-1 win in Spain.

However, Ghana ran out convincing 2-0 winners over the Swiss in a pre-World Cup friendly in Abu Dhabi on Thursday.

Switzerland reached the quarter-finals of EURO 2020 last year, beating Turkey and then world champions France along the way.

As a result, they head to Qatar with higher expectations than usual, although progressing from a group that includes Brazil, Serbia and Cameroon won’t be easy.

That suggests an early exit is a real possibility, but they do tend to punch above their weight, having progressed from their group at their last four major tournaments.

Switzerland’s defence is undoubtedly their biggest strength, having conceded only two goals in qualifying, the lowest total of all European sides to reach Qatar.

With quality like Manuel Akanji ($5.0m), Ricardo Rodriguez ($4.5m) and Nico Elvedi ($4.5m) – plus goalkeeper Yann Sommer ($5.0m) – to call upon at the back, they could potentially keep a clean sheet or two in the group stage.

The midfield is also a strength, with the experienced Granit Xhaka ($7.0m) and Xherdan Shaqiri ($7.5m) expected to start.

In their nine matches in 2022, Switzerland have scored just eight goals, so attack is probably their weakest area.

In fact, the Swiss were the joint-lowest scorers of any European team to qualify for these finals.

Breel Embolo has bags of talent but can sometimes be a bit inconsistent with just three goals in qualifying, while Haris Seferovic ($4.5m) isn’t particularly clinical and hasn’t scored for Galatasaray this season.

Yann Sommer is one of the best goalkeepers in the world and has saved the last four penalties he’s faced in normal time, including Kylian Mbappe’s ($11.5m) spot kick at EURO 2020. He also recorded six clean sheets in eight World Cup qualifiers, too.

Elsewhere, Xherden Shaqiri‘s creativity will be essential to Switzerland, and his link-up play with Sven Widmer ($4.5m) down their right side can be very effective. Indeed, Shaqiri’s four assists in qualifying was a team-leading total, as were his 21 created chances.

Another full-back, Ricardo Rodriguez ($4.5m), also offers plenty of attacking threat in the final third and could also be on some set-pieces and penalties. He averaged just under one shot per game in qualifying and took 11 corners.

Granit Xhaka is the team’s leader and is arguably playing the best football of his career at Arsenal this season. However, he does take up a more defensive role in the engine room for Switzerland, potentially alongside Nottingham Forest’s Remo Freuler ($5.0m), which limits his goal and assist potential.