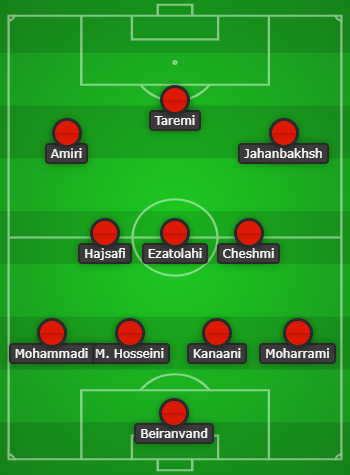 Our World Cup Fantasy team previews continue with a look at Iran, who are part of the group containing England and Wales.

The summer months have been tumultuous. with indecision over whether to keep Dragan Skocic as the coach. Ultimately, the football federation chose to put faith in Carlos Queiroz for his third successive World Cup in charge.

Qualification was comfortable. The first group stage brought surprise defeats to Bahrain and Iraq but also 14-0 and 10-0 demolitions of Cambodia.

When things got serious in the final stage, a generally low-scoring Group A was nicely navigated by both themselves and South Korea.

As the top-ranked Asian side in the FIFA world rankings, an impressive friendly win over Uruguay will breed confidence for Iran’s short journey to Qatar.

“I expect to finish in the round of 16. If you remember, Iran did not advance to the round of 16 in the 2018 World Cup only because of finishing one point behind Spain and Portugal. But now our players are more experienced than the previous World Cup and now they play in bigger teams.” – Babak Khorasani

“Our nation’s footballing strength is in defence. Opponents hardly score against us and I think captaining Kane for Matchday 1 is a bad idea!” – Babak Khorasani

“Our weakness is attacking. Iran doesn’t have a good creative player and our main tactic is to play on the counter-attack.” – Babak Khorasani

“Taremi is the main star of Iran. He scored five goals in the Champions League this season and is in his best form.

“Beiranvand, our goalkeeper, does carry the possibility of a clean sheet and also should be good for save points.

“Hajsafi is Iran’s captain and left-back, though can play further forward. In the game against Senegal, he played very well and provided an assist.” – Babak Khorasani