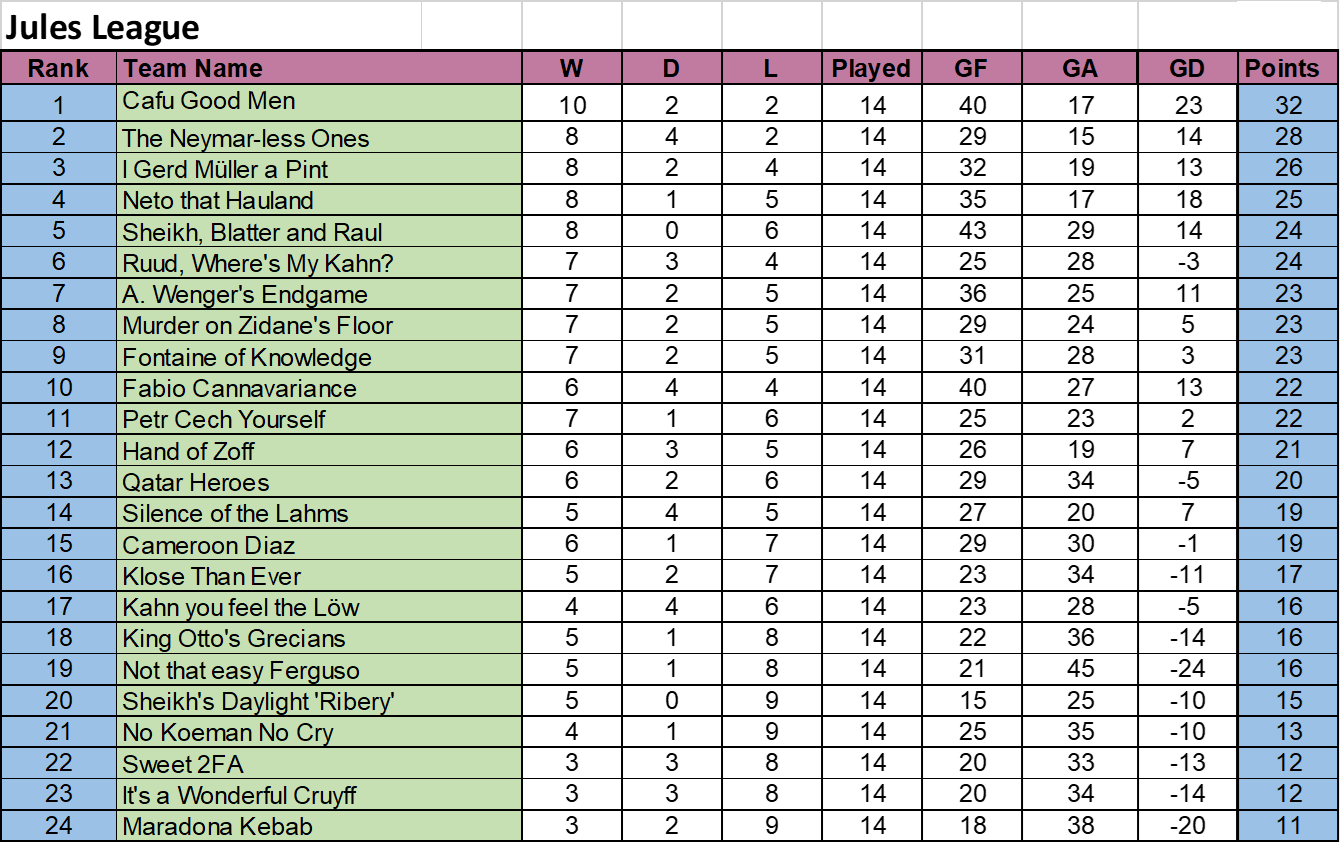 Matchday fourteen of the SKLW tournament finally arrived after a near two month hiatus, with matches taking part in Gameweek 18. Despite refreshed FPL teams courtesy of unlimited transfers in GW17, some of the SKLW teams showed a touch of rustiness, whilst others hit the ground running. Two in fact extended their unbeaten runs to six, Qatar Heroes and The Neymar-less Ones are rising rapidly in the Jules League. Here’s a run down of the latest results:

Not That Easy Ferguso 1 – 4 Qatar Heroes

Home striker Ramdani_dicky grabbed a goal in the H2Hs, but the Qatar Heroes struck a chord and danced four of their own into the opposition’s net, one each for strikers Eddie and I Can’t Think of Owt Funny.

Narcos strikes again with another stroke of management genius. The away team went two goals up, but were pulled back to parity with two fine strikes from the fantastically named St Pauli Walnuts and FPL Darkest Knight. Belalugozi78 repelled all attempts from the away strikers to keep the draw.

The Zoffs robbed the Ribery’s with ease, with a coolly taken goal by striker FPL_Mike Halpin, and a clean sheet from glovesman AJ, both getting a fine FPL score of 64. The Ribery’s are now three games without a point and need to turn their form around somehow.

A comfortable win for FPL Auto Pick’s band of analysts, with one goal coming from Striker FPL_Chase, and a brace from their squad. Finally back into the green zone in fifth place, last season’s H2H winners appear to be gathering pace…

Despite winning the squad goal, veteran Speedy will rue his goalkeeper selection this week, as FPL Dan’s Kebabs fought back with two excellent goals from strikers Evie and FPL_Naboo. Away striker Whitters_2014, also scored to force the draw and deny all three points from the home side.

Petr Cech Yourself 3 – 0 Silence of the Lahms

Home team manager FPL Mihir nailed it yet again, with a clean sheet from FPL Olympian between the sticks and a goal apiece for strikers Andrew Gower and FPL Architect.

Fontaine of Knowledge 2 – 1 Neto that Hauland

The fontaines restarted their SKLW campaign with a fine win. The haulands did win the tight squad match by just five points, but fplbinary got his H2Hs spot on, both strikers scored a goal (FPL Thinkerman and Coops) and Rhys kept a clean sheet.

The highest scoring team, in fpl terms anyway, found themselves two goals down in the squad match vs the Wengers. They had to scramble two H2H goals to grab a draw at the final whistle with goals from queen cola and James Owens

It’s a Wonderful Cruyff 2 – 0 Klose Than Ever

Finally a win for the Cruyffs, who finally moved up from the bottom of the league. A striker goal from Kamalrosdi complimented a second squad goal. Klose Then Ever remain in the yellow part of the league by the skin of their teeth.

The Neymar-less Ones 2 – 0 Camaroon Diaz

The imperious Neymar-less Ones notch up another win, and are now in second place. Bobby Love scored in the H2Hs, and a squad goal made it official. Can anyone slow down the dark horses of the tournament?

It looks like the World Cup break was perfect timing for the Cafus, who had slipped to a two game run of defeats. Resuming with a fine win will feel nice for team manager FPL_Juice, as they retain their spot at the top of the Jules League

The Koemans were bawling their eyes out by the end of this drubbing. The Müllers were ferocious scoring three squad goals, and topped those up with a fine effort from FF_Thinker. A third win in a row for the home side, leaving the away team on three straight defeats.

Cafu Good Men remain at the top with a four point cushion, with The Neymar-less Ones and I Gerd Müller a Pint not too far behind. Maradona Kebab find themselves at the bottom end of the league so will look to follow their draw with a win.

A comfortable win for the Gauchos who moved to third place. Sembada FPL scored a goal in the H2Hs, and combined with a squad goal. The Zizous are now six games without a win and will need to get their scoring boots back on.

Pjanic at the Disco 1 – 1 One Tchouameni

A close game ended in a draw, with FPL Transfer tips side grabbing the squad goal, while Rodney McCain scrambled in a H2H goal to make things even. Both teams are in good positions to climb up the table.

The newly renamed Son of Gün, following Klinsmen’s decision to speak his mind in public, had a close match with the befuddled Flowers. Both teams grabbed goals in the H2Hs, Man On Martyn for the home team, and Mreidfelt for the away side, leaving it to the squad game to decide, and the Güns turned it on to steal the win

Ishaan scored a striker goal for the Fangs, but after that it was one way traffic as the Geoffs turned it on. Palmnation and Annie both scored striker goals, and another squad goal was the icing on the cake. Their first win in six games, the former champions are back at it.

With only four points from their last five matches, Darth Krid was looking for another win to boost his team up the rankins. The Sevens had not read the script, and duly slotted two goals past them with no reply, including a penalty from jhashashank89. With form like this the Sevens will start to fly back up the league table.

Lucio and the Viking Seaman 0 – 4 Netflix and Chilwell

Unlike their eponymous Chelsea left back, the Chilwells are back to their best, dismantling the Vikings with ease. Lewis and Ad both scored a goal as strikers, and two more squad goals completed the humiliation. Their first loss in six games, surely a response will be expected by the Viking’s next opponents…

Another team flying up the league as the Shelby’s grabbed their fourth win in six. Both strikers scored (FPL is Life and FPL Circle) to top their total tally to three. A consolation goal for home striker Camzy, as the Werners cling to the yellow zone of the league table.

Both teams started the match level on points, and neither could land a winning blow. Another tight match ending in a draw, with the HurriKanes winning the squad match only for their opposition manager, FPL Noble Gent to score a striker goal.

Incredibly just one less fpl point from their opposition goalkeeper, and the robbers may have stolen themselves a draw. Unluckily the Ronaldos saw their squad goal added to a single striker goal for Lee Murfat and duly ran off with three league points.

Oh dear the Britney’s continue their fall from grace with their third straight defeat, and find themselves in the yellow zone, following a fine performance by the Benzemas. FPL Kante scored a striker goal, but two squad goals shows just how much the mighty have indeed fallen…

Hyped up as the game of the tournament saw the hamsters take on one of the toughest teams in the Rimet league to secure their place at the top. No striker goals to boast of, both keepers, Jon Ballantyne and Az, kept clean sheets meaning the Bafanas lost by just a single squad goal.

Another tight match settled by a squad goal, scored for the home side. Strikers FPL How and RSM both scored a single goal each in the H2Hs. Both teams end up level in the league with 22 league points each.

Somehow the Hamsters remain top, with Son of a Gün in second place closely followed by Nusantaro Gauchos. Vuvu Zizou have some work cut out if they wish to move up from the bottom of the table, with only 5 league points so far. 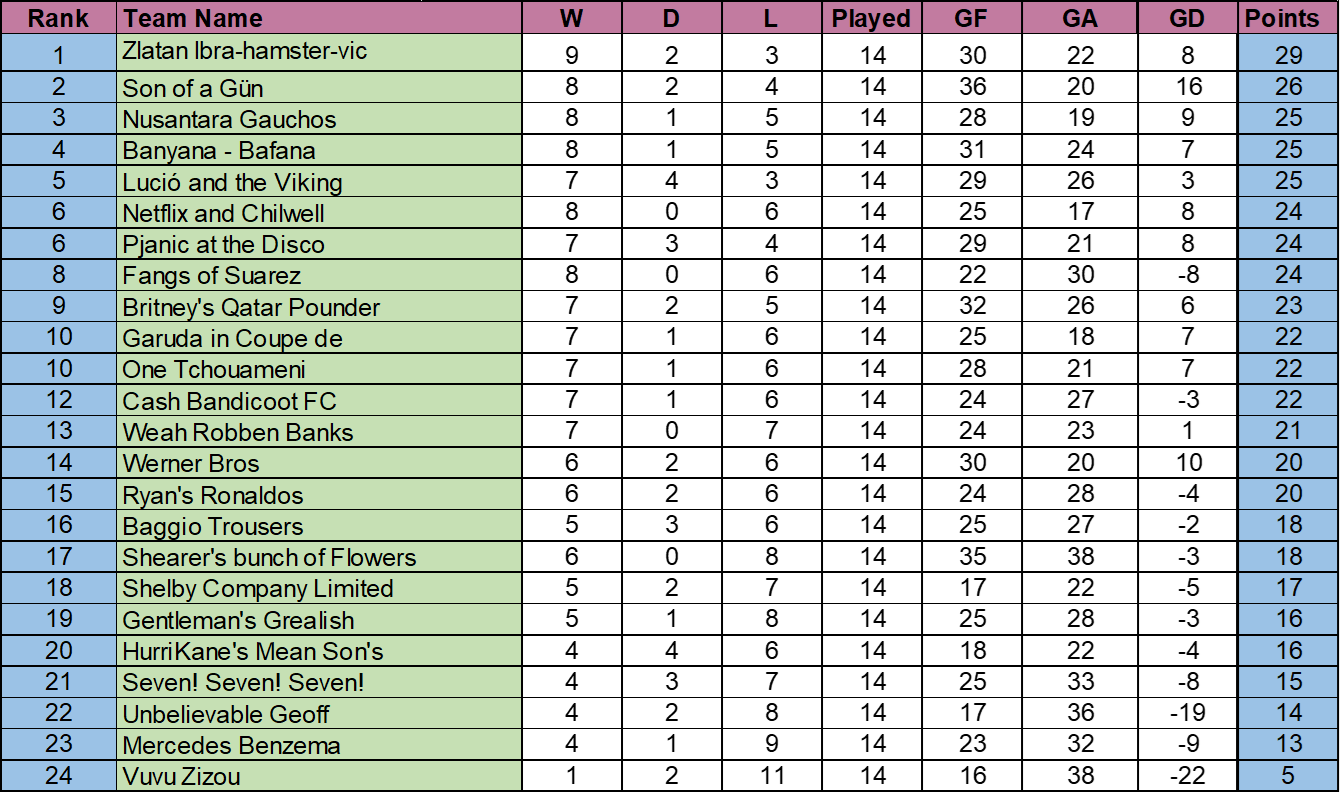 Top scorers of the week were Nurudeen Mutalub and AriseSirGiggsy both with 71 points. Pingreen remains top of the strikers with 11 goals so far to his name, Chayuth Wongthongsri and PG battle it out for top goalkeepers, on 17 and 16 shutouts respectively. Billy Bremner is the top cumulative points scorer in the competition on 919 points so far. 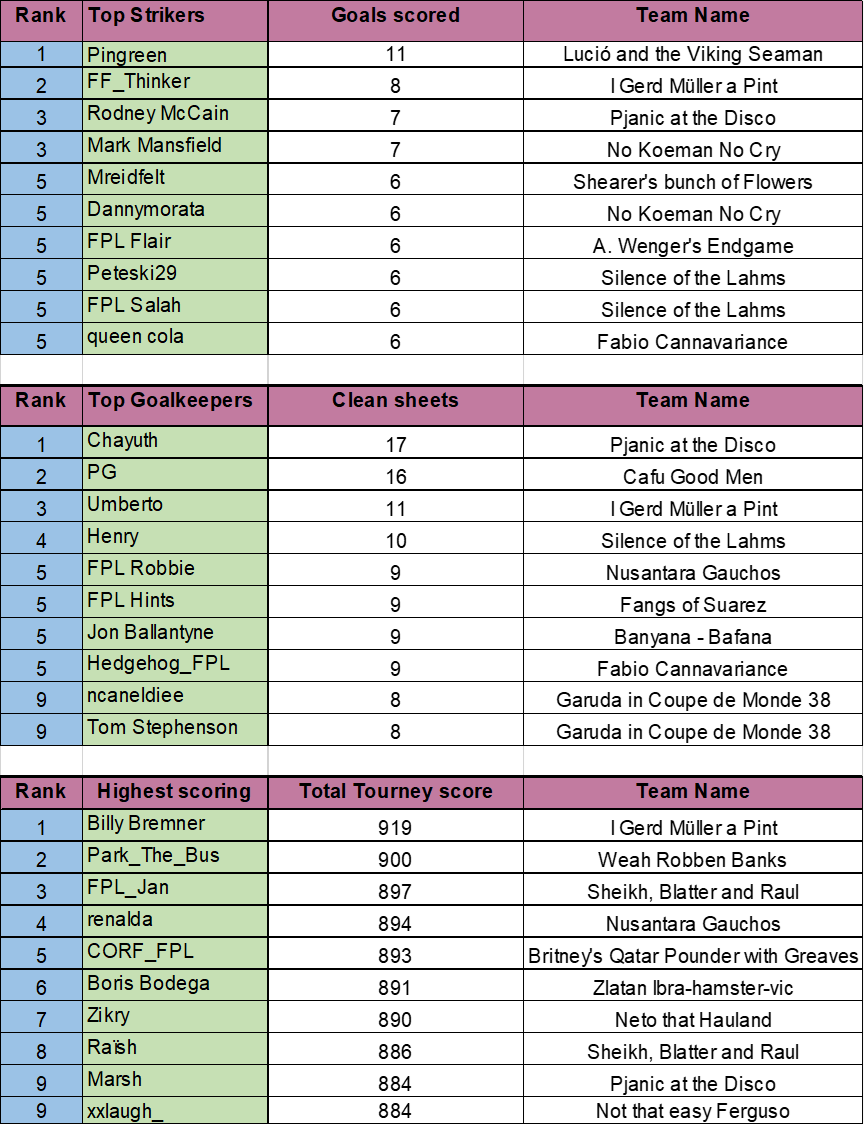 In the Jules league, it is now the turn of Zeeshan and team Klose Than Ever to take on Cafu Good Men, who remain on top of the league by four league points. The Qatar Heroes who are in fine form face Kahn you feel the Löw tonight?, and the other team on form, The Neymar-less Ones are up against another top team, Fabio Cannavariance.

In the Rimet league, HurriKane’s Mean Son’s Three Lions could be the next team to humiliate Britney’s Qatar Pounder with Greaves but the match of the week looks like being between Son of a Gün and Nusantaro Gauchos, although Unbelievable Geoff taking on Lucio and the Viking Seaman also looks like it could be a bloodbath…

Thanks for reading, and good luck to all