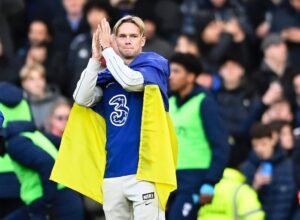 Chelsea poached Mykhailo Mudryk (£7.0m) from under the noses of Arsenal last weekend, signing the 22-year-old in a projected £88m deal from Shakhtar Donetsk.

He caught the eye in the UEFA Champions League (UCL) group stage and arrives on the back of 10 goals and nine assists across all competitions this season.

The Ukrainian winger was paraded on the pitch at half-time during Chelsea’s 1-0 win over Crystal Palace on Sunday, after signing a whopping eight-and-a-half-year deal.

Mudryk has since been priced up as a £7.0m midfielder by FPL and could make his debut when the Blues travel to Liverpool in the opening fixture of Gameweek 21 on Saturday.

But is Chelsea’s new signing worthy of Fantasy interest? We’ll assess his appeal in this Scout Report piece.

Coming through Skakhtar Donetsk’s youth academy, Mudryk was handed a first-team debut in a Ukrainian Cup match at the age of 17.

The next step was a loan move to Arsenal Kyiv before he returned to Shakhtar and made three Premier Liga appearances in 2019/20.

Another loan followed, to Desna Chernigiv, where he gained vital experience, which helped him establish himself upon his return to his parent club, who had just appointed current Brighton head coach Roberto De Zerbi.

Mudryk scored his first goal in October 2021 and featured in every UCL group-stage game that season, including matches against Real Madrid and Inter Milan. However, the domestic league was halted due to the Russian invasion of Ukraine, leaving him with only 11 Premier Liga appearances in 2021/22.

The current campaign sees him boast seven goals and six assists in 12 league appearances, with five goal involvements in six UCL outings, an impressive showing given that Shakhtar were outsiders in their group.

For Ukraine’s national side, Mudryk has eight caps to his name so far, having made his international debut last year.

WHERE WILL HE FIT IN AT CHELSEA?

Dubbed the ‘Ukrainian Neymar’, Mudryk can play either in a wide position, as a number 10 or as a forward, but many of his best performances came when cutting in from the left onto his preferred right foot.

He is quick, his movement is great and he is equally comfortable staying wide or moving into more central areas.

As a result, it’s likely Mudryk will perform as a left-winger at Chelsea, certainly initially given the injury crisis at Stamford Bridge, which includes positional rivals Raheem Sterling (£9.7m) and Christian Pulisic (£5.7m).

Therefore, we could potentially see Graham Potter favour a front three of Mudryk, Kai Havertz (£7.8m) and Joao Felix (£7.5m), once the latter returns from suspension of course.

“It’s more comfortable for me when I play on the line where I can show all my potential one against one. I have more space to move to the front and I can create a lot more chances when I play on the line. There are more people in the middle. But, you know, the middle is also OK for me. My inspiration is Cristiano Ronaldo because of what you can do if you work hard and believe in yourself. I like the way Cristiano plays. I see myself like that – a winger. But I need more time to change my position from No. 11 or No. 7 to No. 9. With time it is possible.” – Mykhailo Mudryk

“He’s a young player with a big future. He has exciting quality in the final third, very fast and direct, attacks the backline, can go in wide areas but also affects the goal. He’s a really exciting player and I think our supporters will like him.” – Graham Potter

“Mudryk is a serious talent. After Kylian Mbappe and Vinicius Junior, he’s the best player in Europe in his position. If someone wants to buy Mudryk they must spend a lot of money and respect our club and president.” – Darijo Srna, Shakhtar’s director of football

The biggest problem at Chelsea right now is clearly at the top of the pitch, with just five goals scored in five games since the Premier League restarted, and 12 in 12 overall under Graham Potter. Across the 2022/23 campaign, the Blues rank 13th for minutes-per-xG (81.4), so it’s clear they need more quality in attack.

In that sense, the signing of Mudryk should provide a much-needed spark and help boost their numbers.

Due to those aforementioned injuries, it’s likely Potter will want to integrate Mudryk into his starting XI as quickly as possible (see Joao Felix), potentially as soon as Saturday’s visit to Anfield.

Mudryk may still be a little rough around the edges, but we’ve seen a huge step up in his output this season, with the obvious caveat that the Premier League is levels above the Ukrainian top flight. However, he’s already produced in the UCL, which offers encouragement that he can hit the ground running.

Mudryk was Shakhtar’s nominated set-piece taker because of his excellent crossing ability, so a share of dead-ball duties would boost his potential in FPL. Meanwhile, 1.33 key passes per 90 minutes (p90) in the UCL this season hints at his potential as a creator, while eight dribbles p90 shows a willingness to take players on in the final third in an attempt to make things happen.

The issue for Mudryk is the number of appealing midfielders available to FPL managers right now, which suggests it will be hard for most of us to fit him in.

Saying that, Chelsea have a favourable run of fixtures, including West Ham and Southampton in the next four Gameweeks, so Mudryk could be an option for anyone looking to break the template.

Nonetheless, with so many strong midfield options in the same price bracket, allowing him time to settle is probably best advised.