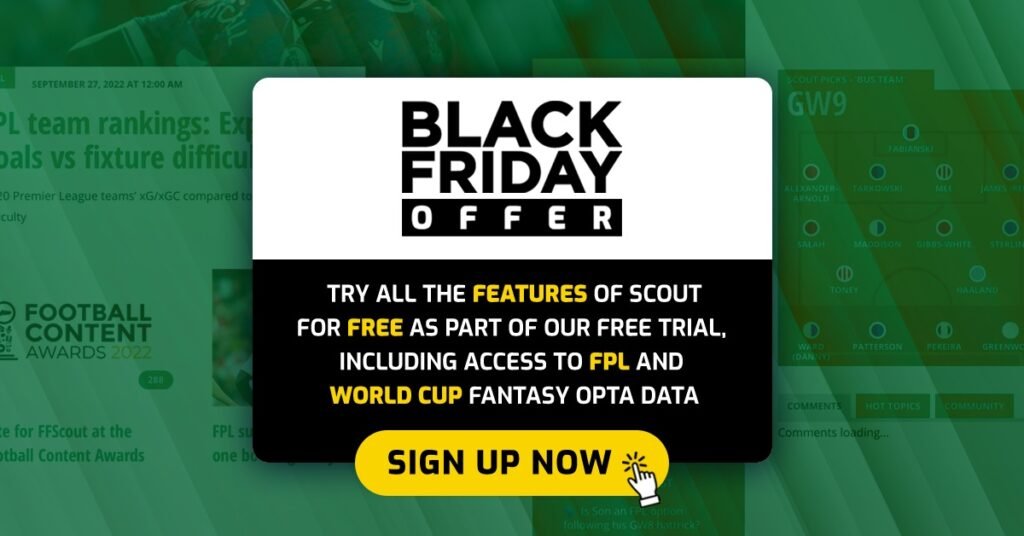 A discounted microwave or a cut-price bottle of Bailey’s won’t help you win Fantasy Premier League (FPL) or World Cup Fantasy – but a Fantasy Football Scout Premium Membership just might.

We’re entering into the spirit of Black Friday by offering a three-day free trial of our monthly and annual subscriptions but only for a limited period, so get in there while you can.

Ever wondered what the fuss was all about but wanted to ‘try before you buy’? This is just the thing for you.

WHAT DO I GET WITH MY FREE TRIAL?

Now’s the perfect time for a free trial, as not only will you get access to all of the official Opta World Cup qualifying and tournament data (if you happen to be playing World Cup Fantasy!) but you can also get a head start on your Gameweek 17 planning for FPL.

You’ll be joining legions of other Fantasy managers by signing up to our award-winning site, including former Fantasy Premier League winners Adam Levy, Simon March and Tom Fenley.

Thousands upon thousands of FPL bosses take advantage of our subscriptions and sign up every year, using the stats and tools to aid their Gameweek planning.

Our video below runs down just some of the benefits that you can enjoy with your free trial:

There are hundreds upon hundreds of player and team statistics and heatmaps available, which can help guide your Fantasy transfer decisions.

“Don’t go chasing last week’s points”, the old saying goes. By looking at underlying data, you can see which players are likely to repeat big Fantasy hauls in the following games.

As mentioned above, you’ll have access to both World Cup data *and* Premier League stats.

If that wasn’t enough, Fantasy Football Scout’s founding father, Mark Sutherns, will supply video appearances throughout the season. Again, only Premium Members will get unrestricted access to Mark’s content.

RATE MY TEAM AND PROJECTIONS

Our Projections and Rate My Team (RMT) algorithms predict how many points your FPL players and team will score each Gameweek.

These features were explained by RMT’s Professor – aka Chris Atkinson – in a Hot Topic.

Non-members can view our Career Hall of Fame, which is updated only after the end of each season, but subscribers get access to the more regularly updated Live Hall of Fame to see where they rank compared to some FPL greats.

Another benefit is our Season Ticker.

Premium Members can sort by fixture difficulty and find out which teams’ matches rotate well.

Disagree with the Fantasy Football Scout difficulty ratings? Add your own to customise your experience!

Compare both teams and players head to head, with over 100 key statistics to study side by side.

Analysis of every Premier League fixture (going back to 2011/12!) in our Match Centre, together with charts that plot average positions and our collection of heatmaps for touches, shots and chances created, among other statistics.

Premium Members can also create custom tables based on the data available and share them with other subscribers.

Perhaps the most famous of these is Joe’s Goals Imminent table, which looks to predict which underperforming assets will find the net next.

2018/19 Fantasy Premier League champion Adam Levy was a paid-up Premium Member of our site and he discussed what tools of ours he finds most useful in an interview after his triumph.

In previous seasons we’ve helped FPL winners Tom Fenley and Simon March, while in 2015/16 we were thrilled to see Ed Masters – the winner of that year’s Members’ League – finish third in the overall rankings.

In 2017/18, Paul Gee went one better. He won our Members’ League and finished second, losing out to champion Yusuf Sheikh by just eight points.

If you don’t want to commit to a Premium Membership after this free trial, make sure you cancel before the three-day trial period is over.

Be sure to check out all the other benefits of signing up as a Premium Member here. A full FAQ on our Premium Members’ Area is also available here.

If you’ve any feedback or suggestions of content that you’d like to see added to the Premium Members’ Area, then please feel free to drop us a line at support@fantasyfootballscout.co.uk.