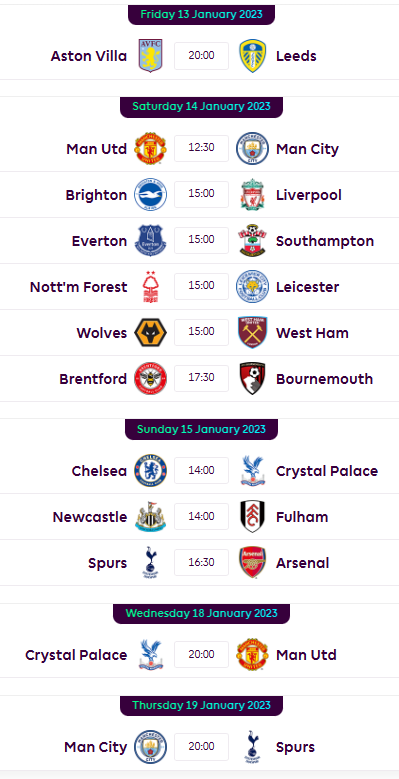 After a hectic festive period, we finally have a bit of breathing space ahead of the next Fantasy Premier League (FPL) deadline.

That means there’s ample time to put together our Scout Picks ‘bus team’ ahead of Gameweek 20, which is now a double for four clubs.

In this early selection, we select a first draft of our regular picks before they are finalised and published much closer to deadline.

We are limited to an £83.0m budget for our starting XI, while our bench is also price-capped after a reader vote.

In the meantime, this ‘bus team’ article – a term coined by the duo behind the Always Cheating podcast – will discuss the players who are likely to be in the running.

Man City and Spurs are now confirmed as having a ‘double’ in Gameweek 20, so FPL’s top two points scorers – Erling Haaland (£12.2m) and Harry Kane (£11.6m) – are something approaching shoo-ins for the Scout Picks. The pair have racked up a combined 36 goals and seven assists in 2022/23, averaging 9.0/7.1 points per match respectively. However, Kane sits on four yellow cards, so he will need to avoid a caution in the north London derby if he is to feature in both games.

Who joins them from their respective clubs is still up in the air, however.

Pep Guardiola’s new set-up at Stamford Bridge on Thursday saw Joao Cancelo (£7.3m) on the right wing, while Kyle Walker (£4.8m) and Phil Foden (£8.2m) were also handed their first starts since returning from the World Cup. Order restored, then? Well, not really. The 3-5-2/4-4-2 hybrid system didn’t work and they were all hauled off, which leaves their game-time prospects in Gameweek 20 in question. To further complicate matters, Rico Lewis (£3.9m), Jack Grealish (£6.8m) and Riyad Mahrez (£7.5m) all impressed from the bench.

However, all this uncertainty raises Ederson (£5.4m) and Kevin De Bruyne’s (£12.5m) stock, who we’ve plumped for in this early edition of the Scout Picks. Man City have another cup match to go before we need to commit to our final selections, yet Ederson, De Bruyne and Haaland all feel like ‘safe’ picks, given that they’ve played every minute of every league game since the restart.

Manchester United also get a Double Gameweek 20, so we can now move the Red Devils’ picks from ‘long shots’ to ‘likely lads’ – even if one of their two matches is against their cross-city rivals.

Luke Shaw (£5.1m) and Marcus Rashford (£7.0m) are the obvious stand-out targets based on recent achievements: the pair are ranked first and third among all FPL assets for points since the Boxing Day resumption.

And now for the only single Gameweek player included in this section of our coverage: Kieran Trippier (£6.0m). Newcastle United recorded their 10th clean sheet of the season at the Emirates in Gameweek 19, while Trippier has three goals and three assists in his last 11 St James’ Park appearances. Opponents Fulham know where the goal is but then so did the Gunners, and the Cottagers are in action against Chelsea less than 72 hours before they head north to Tyneside.

Matt Doherty (£4.6m) and Ivan Perisic (£5.5m) will probably be relying on attacking returns for points, with Spurs up against the division’s two most potent attacks. Still, their recent underlying numbers show promise, with both players producing double-figure hauls at Selhurst Park last time out. If Dejan Kulusevski (£7.9m) can prove his fitness, he too might enter the conversation, although budgetary constraints will make it particularly difficult for Son Heung-min (£11.6m) to make the cut.

Like Spurs above, it’ll be a tall order for Palace defenders to bank a clean sheet across their double, with two big-six sides up next. Chelsea aren’t the formidable force they once were, however, ranking 19th for xG over their last six matches. At the other end of the pitch, Wilfried Zaha (£7.3m) carries as much of a game-time guarantee as any other Premier League player, although Eberechi Eze (£5.6m) betters him for both goal attempts and chances created across their last six matches.

By netting in midweek, Rodrigo (£6.3m) became the first FPL midfielder to reach double-figures for goals in 2022/23. In his position, he sits second for shots and xG, with a trip to Villa Park up next. The hosts are moving in the right direction under Unai Emery, but have kept just one clean sheet in five matches under the Spaniard.

And what about Liverpool, who meet a Brighton and Hove Albion outfit who are more attack-minded than ever under Roberto De Zerbi? Mohamed Salah (£12.8m) or Darwin Nunez (£8.9m) are the obvious candidates for Jurgen Klopp’s side, although the arrival the cheaper Cody Gakpo (£8.0m) has the potential to influence our decision.

Albion’s own in-form forward line will be up against a Liverpool backline ranked 18th for big chances conceded in 2022/23, meanwhile, so the likes of Kaoru Mitoma (£4.9m) – who has three goals in his last four league starts – could be great budget enablers for this weekend and beyond.

If the Scout Squad panel opts for a Man City defender, like John Stones (£5.4m), over Ederson, Kepa Arrizabalaga (£4.6m) and David Raya (£4.6m) will be in the conversation for the goalkeeper spot, with Thiago Silva (£5.4m) and Ben Mee (£4.6m)/Ethan Pinnock (£4.4m) appealing alternatives at Chelsea and Brentford respectively.

Attacking representation from Newcastle seems likely via either Miguel Almiron (£5.9m) or Callum Wilson (£7.2m), while the likes of Yoane Wissa (£5.3m), Harvey Barnes (£6.8m) and Kaoru Mitoma (£4.9m) could provide us with some exciting differential picks.

Of the rest, Everton and Southampton face off at Goodison Park, with both sides at rock bottom, which is off-putting for picks like Jordan Pickford (£4.5m), Demarai Gray (£5.3m) and James Ward-Prowse (£6.5m).

Nottingham Forest’s Morgan Gibbs-White (£5.5m) and Brennan Johnson (£5.6m) could potentially stake a claim, while there are a few outsiders if we do decide to add an extra forward into the mix, with Bryan Mbeumo (£5.8m) and Ivan Toney (£7.4m) – if available – at the front of the queue.